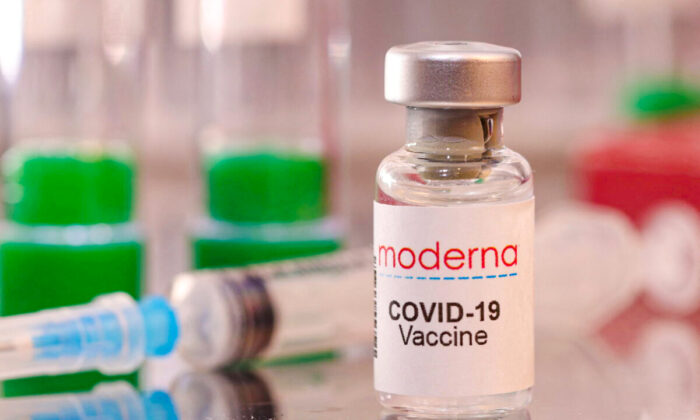 A vial labelled "Moderna COVID-19 Vaccine" is seen in this illustration taken on Jan. 16, 2022. (Dado Ruvic/Reuters/Illustration)
Businesses in COVID-19

A top executive at vaccine maker Moderna said that an Omicron- and subvariant-specific COVID-19 vaccine booster will be potentially released by the company in the fall.

“We announced a couple weeks ago a new, variant-specific booster that we’ve been testing, and we have an additional candidate, our lead candidate, in testing now that I believe is going to be even more superior,” Moderna Chief Medical Officer Paul Burton told CBS on Sunday.

“We are confident that by the fall of this year, we should have large amounts of that new booster vaccine that will protect against Omicron and other variants, and really protect Americans and people around the world as we go into the fall of 2022.”

Earlier this year, the Food and Drug Administration (FDA)set a deadline of June for vaccine manufacturers to submit their respective formulas for variant-specific COVID-19 vaccines.

It comes after the company asked the FDA to authorize its vaccine for children under the age of 6. Burton told the outlet that the vaccine is only 37 percent in children aged 2 to 5 and 51 percent effective on children aged 2 and under. He said that because of the Omicron variant, the vaccine has a lower efficacy.

“What it means for parents or caregivers is that if they give the Moderna vaccine to these little kids, they would basically cut in half the risk of that children getting symptomatic COVID,” he claimed. “I know that 50 percent is often lower than what we’re used to seeing with our vaccine, but it’s because this study was conducted during a time of Omicron.”

Studies and data have shown that throughout the pandemic, small children saw the lowest hospitalization and death rates among all age groups. Elderly people and individuals with compromised immune systems have the highest COVID-19 death and hospitalization rates, according to data published by health agencies around the world.

And it is not clear how many American parents will want to vaccinate their children as data shows that only 28 percent of U.S. children in the 5 to 11 age group are fully vaccinated.

Meanwhile, data published by the Centers for Disease Control and Prevention (CDC) show that COVID-19 case numbers continue to remain vastly lower than the recent January 2022 peak. As of April 29, the 7-day average for U.S. cases stood at around 56,000, whereas on Jan. 15, the seven-day average was about 808,000.

On Tuesday, Pfizer asked the FDA to approve a third, or booster, dose for children aged 5 to 11.