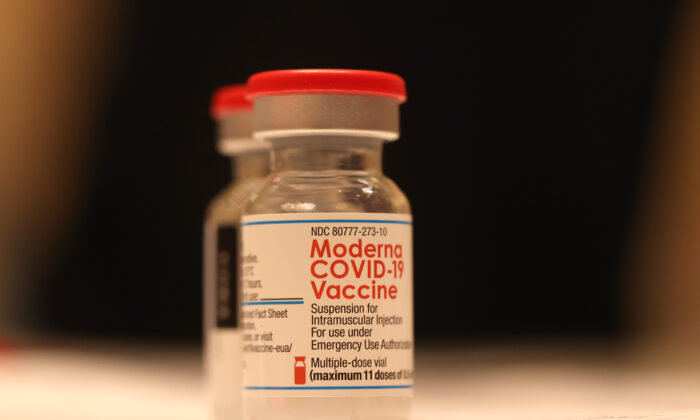 Vials of Moderna's COVID-19 vaccine on a table in a vaccination clinic in San Rafael, Calif., on April 6, 2022. (Justin Sullivan/Getty Images)
Vaccines & Safety

Over 1,000 cases of heart inflammation have been detected in recipients of Moderna’s COVID-19 vaccine who are under 40 years old, the biotechnology company said on June 10.

Myocarditis, a type of heart inflammation, has been most prevalent following vaccination in males 18 to 24 years old, according to the company. In a document (pdf) filed before upcoming meetings with U.S. regulators and an advisory panel, Moderna said 42.6 cases of myocarditis have appeared per million second doses administered to males in that age group across the world.

Overall, approximately 1,076 cases have been recorded in people aged 12 to 39, according to the document, which cited Moderna’s safety reports as its source.

Through April 15, an estimated 160 million doses of Moderna’s vaccine have been administered to people under 40.

The company did not report cases of pericarditis, another heart inflammation condition that has been linked with the vaccines produced by both it and Pfizer. The two vaccines are built on messenger RNA technology and were the first such shots to receive regulatory clearance in December 2020.

Moderna’s document was submitted to the U.S. Food and Drug Administration (FDA) and its vaccine advisory panel ahead of June 14 and June 15 meetings.

Moderna did not break down its numbers by country.

One thousand fifty-six reports of post-vaccination myocarditis following receipt of Moderna’s vaccine among those under 40 have been lodged with the U.S. Vaccine Adverse Event Reporting System (VAERS), which is managed by the FDA and another federal agency.

The reports, which are through June 3, include four deaths and 21 cases of permanent disability.

Another 526 cases of pericarditis have been reported in the same age group after receipt of Moderna’s shot, with one additional death reported and 13 other reports of permanent disability.

VAERS is a passive system and some reports may not be legitimate, though studies have indicated that conditions are actually underreported to the system.

Both myocarditis and pericarditis can have serious repercussions, with doctors often ordering patients to stop all physical activity for a period of time.

According to followup cardiac imaging of a subset of patients, problems have been persisting for months. Long-term impact is unknown.

Moderna alleged that myocarditis from COVID-19 is more prevalent than the cases following vaccination, citing non-peer-reviewed data published in the Centers for Disease Control and Prevention’s quasi-journal. Some other studies have indicated the opposite. Moderna said no myocarditis or pericarditis cases were detected in its studies of children. It also said that its analysis of safety data suggests that the benefits of its vaccine “far outweigh any possible vaccine-associated risks, including the risks of myocarditis and pericarditis.”

All three COVID-19 vaccines that are available in the United States have performed worse against newer variants of the CCP (Chinese Communist Party) virus., which causes COVID-19, becoming ineffective in preventing infection and less effective against preventing severe illness.

Experts have increasingly questioned the benefit-risk ratio in light of side effects like myocarditis. Dr. Cody Meissner, who sits on the FDA’s advisory panel, told The Epoch Times earlier this year that newer data suggested “the benefit roughly equals the risk of harm” for many children.

The company also said it expects no cases of myocarditis in children 11 or under, citing data from one of its own systems, which captured data from more than 50,000 who have received the vaccine despite it not being authorized for adolescents.

Hundreds of reports of myocarditis experienced after Pfizer’s vaccine among children have already been lodged with VAERS, including approximately 2.6 per million among children aged 5 to 11 after a second dose, the CDC said in a recent presentation (pdf).

The rates peak among 16- and 17-year-olds and go down in each direction.

Additional files will be submitted before the meetings, including an FDA analysis of the trial data and a government projection of the risks and benefits of the vaccine.