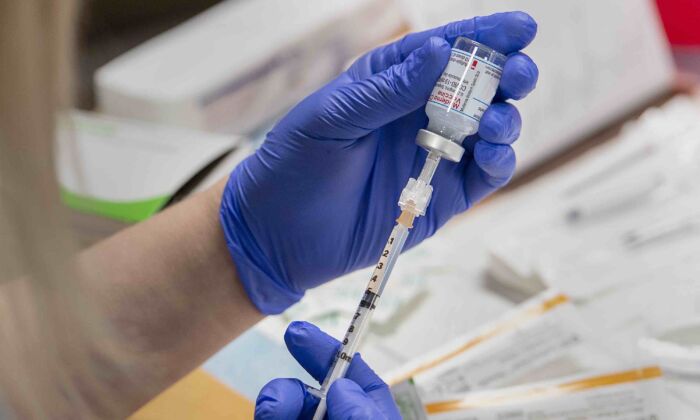 A nurse prepares a dose of the Moderna vaccine in Halifax, Canada, on Jan. 11, 2021. (Andrew Vaughan-Pool/The Canadian Press)
US News

Two biotechnology companies filed a lawsuit against Moderna this week and alleged the vaccine manufacturer infringed on patented technology in the development of its commonly used COVID-19 shot.

Arbutus Biopharma and Genevant Sciences, the companies, claim in a civil lawsuit that Moderna used “breakthrough technology Arbutus had already created and patented” to create the COVID-19 vaccine such as the lipid nanoparticle delivery system, according to a complaint (pdf) filed in the U.S. District Court in Delaware. Genevant is owned by Roivant, a company that licensed the patents in question from Arbutus.

“Moderna was well aware of Arbutus’s LNP patents and licensed them for other product programs, but it chose not to do so for its COVID-19 vaccine. Instead, it attempted to invalidate several of the patents before the United States Patent and Trademark Office, and when those efforts largely failed, Moderna simply used the patented technology without paying for it or even asking for a license,” the complaint read.

The two companies alleged that Moderna committed seven counts of patent infringement. They are asking for financial compensation from the company.

In a statement on Monday, Moderna denied the allegations contained in the civil lawsuit.

“Moderna denies these allegations, and will vigorously defend itself against Genevant’s claims in Court,” a Moderna spokesperson told The Epoch Times. “ Our COVID-19 vaccine is a product of Moderna’s many years of pioneering mRNA platform research and development, including creation of our own proprietary lipid nanoparticle delivery technology, which has been pivotal to combat the COVID-19 pandemic.”

With the lawsuit, Genevant and Arbutus said they are not seeking a court injunction because it would “impede the sale, manufacture or distribution of MRNA-1273” in vaccines, said William Collier, the CEO of Arbutus, in a statement.

“However, we seek fair compensation for Moderna’s use of our patented technology that was developed with great effort and at great expense, without which Moderna’s COVID-19 vaccine would not have been successful,” Collier continued to say.

In late February, Moderna CEO Stephane Bancel said that orders of its vaccine rose to $19 billion for 2022 sales, which is up from the $18.5 billion that was announced a month before.

“We believe there’s a high probability that we’re moving into an endemic setting,” Bancel told CNBC last week. “We should still be cautious because as we’ve seen with Delta, which came after Alpha and was more virulent, [it] is always possible to get the more virulent variant of course.”

The Epoch Times has contacted Moderna for additional comment.