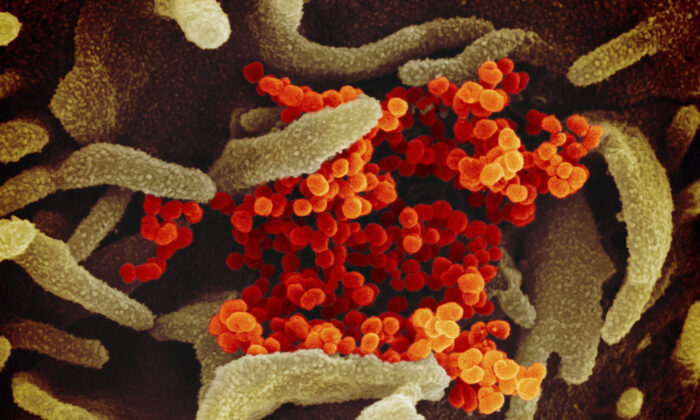 This scanning electron microscope image shows SARS-CoV-2 (orange)—also known as 2019-nCoV, the virus that causes COVID-19—isolated from a patient in the United States, emerging from the surface of cells (green) cultured in the lab. (NIAID-RML via AP)
By Zachary Stieber

Moderna, a U.S.-based drugmaker, has sent the first batch of an experimental vaccine against the new coronavirus to federal researchers to test in humans.

The shipment came just 42 days after the company selected part of the genetic sequence of the virus.

The institute expects to start a clinical trial of around 45 people within six weeks, NIAID Director Anthony Fauci said at a press conference on Tuesday. He said that the gene had been expressed in the platform of messenger RNA and the material was produced and put into mice.

Initial results could be available as soon as July. But any vaccines will likely take until next year to become available on the commercial market because of the need to conduct additional studies and clear regulatory hurdles. A phase two trial would involve hundreds if not thousands of people to determine efficacy, Fauci said.

Fauci, speaking last month on a panel in Washington, said that phase one trials take about three months and focus on making make sure the vaccine is safe. A phase two trial would take at least six months but possibly over eight months, he said. If the vaccine passes the trials, it takes additional time to scale up for major distribution.

“A vaccine may not solve the problems of the next couple of months, but it certainly would be an important tool that we would have,” he said on Tuesday.

Moderna’s efforts are being funded by the Norway-based Coalition for Epidemic Preparedness Innovations, the company and group announced in late January. The coalition is also funding efforts by Inovio and the University of Queensland in Australia to develop vaccines against the new COVID-19 disease.

“Through our partnership with Moderna and the NIH, we hope to speed the development of a vaccine against the coronavirus and help to alleviate the burden of disease,” Richard Hatchett, the coalition’s CEO, said in a statement.

Moderna’s vaccine uses or mRNA, or messenger RNA. The genetic molecules carry the information from the DNA in the nucleus of the cell to the cytoplasm where the proteins are made, according to NIH.

The approach of using mRNA carries potential advantages including the ability to mimic natural infection to stimulate a more potent immune response, combining multiple mRNAs into a single vaccine, and rapid discovery to respond to emerging pandemic threats, according to the company. Moderna has no approved vaccines but has nine being tested or developed, including one for the Zika virus.

Other companies are also working on vaccines. Johnson & Johnson’s vaccine division, Janssen, is working with the Department of Health and Human Services’ Biomedical Advanced Research and Development Authority to develop a vaccine.

“Janssen is a proven partner with a flexible, rapid, vaccine platform which gives us an edge in the race to protect people in the U.S. and worldwide from the health security threat posed by this Novel Coronavirus,” Rick Bright, director of the authority, said in a statement earlier this month announcing the partnership.

“The technology produces an exact genetic match to proteins of the virus. The protein’s DNA will be combined with DNA from a virus harmless to humans, and used to rapidly produce large quantities of antigen which stimulate the immune system to protect against the virus,” the department said in a press release. “The antigens will be separated and collected from these cells and purified to create working stocks of vaccine for advanced development.”

Other researchers are working on testing existing drugs on coronavirus patients. Two clinical trials conducted through the World Health Organization’s R&D Blueprint, a plan that allows the rapid activation of research and development activities during epidemics, are expected to produce preliminary results around mid-March.

One of the trials is using lopinavir and ritonavir, two drugs typically used to treat HIV, or human immunodeficiency virus infection. The other trial is testing an antiviral drug called remdesivir that was developed by Gilead Sciences.

Dr. Bruce Aylward, an expert from Canada who is leading an organization team in China looking at the outbreak there, told reporters on Monday that experts believe remdesivir might have “real efficacy.”

He called for diverting more resources into treatments that are promising, saying, “We have got to start prioritizing enrollment into those things that may save lives and save them faster.”