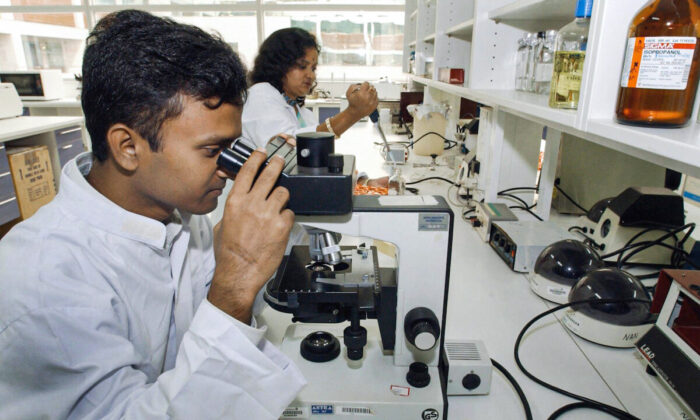 Drugmakers Moderna and AstraZeneca are partnering up to develop a “mRNA therapeutic” to treat life-threatening cardiovascular disease such as heart failure.

“We are collaborating with @AstraZeneca on an mRNA therapeutic (AZD8601) that encodes for VEGF-A to promote recovery of cardiac function through tissue regeneration,” Moderna said in a Twitter post Thursday.

The treatment aims to promote the growth of new blood vessels, and therefore heal the hearts of surgery patients, the Philadelphia Inquirer reported.

The study of 11 patients saw seven treated with the “mRNA therapeutic” and four receive placebo injections.

All seven recipients who received the treatment had NT-proBNP levels—which indicates heart failure—below heart failure limit at six months follow-up, compared to one of four patients treated with placebo.

“mRNA is a compelling therapeutic modality because of its ability to act locally and transiently, while driving dose-dependent protein expression. We thank AstraZeneca for their partnership and collaboration, which began in 2013, in advancing this program,” said Stéphane Bancel, chief executive officer of Moderna said in November.

Bancel added, “The results presented today are a result of pushing new boundaries in the treatment of cardiovascular and other ischemic vascular diseases to address serious unmet needs with the goal of improving patients’ lives.”

“Over one billion heart cells can be lost during a heart attack. These early results indicate the potential of mRNA therapeutics in stimulating VEGF-A production to provide reparative and disease-modifying options for patients with heart failure and other ischemic vascular diseases,” Mene Pangalos, executive vice president, BioPharmaceuticals R&D, AstraZeneca, said in a statement at the time.

He noted however that the study wasn’t large enough to draw conclusions about the treatment’s effect on heart function.

Moderna’s two-shot mRNA COVID-19 vaccine has been linked to post-vaccination heart inflammation cases. Recent research indicates young people may be at more risk of developing myocarditis from the shot than COVID-19 itself.

On Feb. 4, the Centers for Disease Control and Prevention (CDC) outlined an expected change to the COVID-19 vaccine schedule for people with weak immune systems and signaled that a different alteration is coming for the general population to try to cut the number of post-vaccination heart inflammation cases.