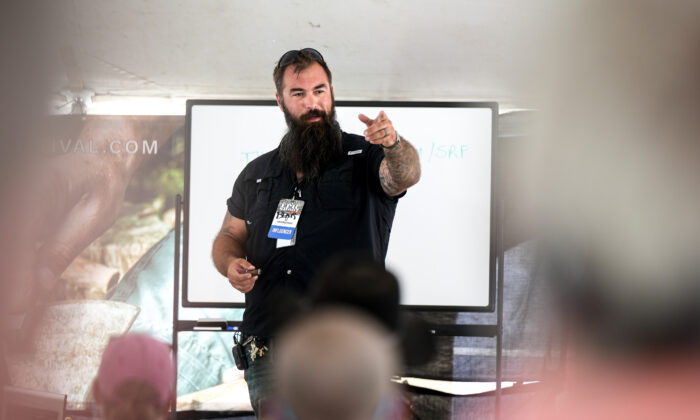 TJ Morris, aka Bear Independent, host of The Prepper Classroom, speaks at the Self-Reliance Festival in Camden, Tenn., on June 12, 2022. (Charlotte Cuthbertson/The Epoch Times)
US Features

CAMDEN, Tenn.—John Willis spent about 10 years living in the backwoods waiting for society to collapse.

“I think a lot of people forget to live because you’re waiting for society to collapse,” Willis said during a Self-Reliance Festival in Tennessee recently. “I spent a lot of years in a cave, doing absolutely nothing.”

He said he emerged still owing the IRS $3.2 million and ready to try a new approach to life. Now (after paying back the IRS), he’s part of a larger community of people in Tennessee and beyond who are moving toward a lifestyle that can mostly operate outside of government vagaries.

Modern-day prepping builds on a lot more than the panicked reaction of isolating yourself or frantically squirreling away beans, bullets, and bandaids. It’s an intentional shift toward living a more traditional, self-sufficient, and responsible lifestyle.

“Preparedness is not a big pile of stuff in the basement. That’s a good piece of preparedness. But that’s like, everything else has failed so now I’m going to rely on my stockpile,” said Jack Spirko, one of the more well-known preppers. Spirko hosts The Survival Podcast, with the tagline: “Helping you live a better life, if times get tough or even if they don’t.”

The combination of the government-imposed lockdowns during the COVID-19 pandemic and resultant panic-buying, the Black Lives Matter riots in 2020, and the 2020 election spurred a lot of Americans into making their household more resilient financially, as well as with food, water, and other essentials.

But, it needs to be a rational, step-by-step process, the experts say.

“I think probably the biggest mistake most preppers are making … is y’all are full of too much anxiety. Way too much anxiety—you’re worried about everything,” TJ Morris said in Tennessee.

“You should let that anxiety spur you to action, and then become emotionally detached from the execution portion of it. Just do it.”

Morris, who goes by Bear Independent online, has a 28-episode Prepper Classroom series on YouTube that logically explains the fundamentals of prepping and provides a how-to guide. His food prepping video details amounts, based on calorie intake, including that each adult needs 750 pounds of dried grains per year.

Morris said he worked with FEMA for 10 months after Hurricane Katrina from the Florida Keys up to east Texas.

He’s spent the last several years building his own resilient homestead as well as a strong community of people who are willing to help each other.

Spirko’s first piece of advice is for people to strengthen the financial side of their lives.

“That’s the thing that’s going to hit you first,” he said. Diversify your money sources, start a side business using social media as an advertising platform, and look for bartering options in your community.

“And then as far as food preparation, get yourself a sheet of paper … and keep a food diary. Everything in there that you can store, start stacking that,” Spirko said. Aside from increasing pantry size, home gardens have become one of the most popular ways people have responded to food pressures. He said his biggest mistake was trying to do everything at once.

Joel Skousen, author of several books about strategic relocation and securing your home, has published a basic booklet called “10 Packs for Survival,” in which he lists the essential items within the 10 categories of food, water, power, medical, transport, travel, communications, equipment, defense, and tools.

Nicole Sauce, who is known for her podcast, Living Free in Tennessee, has helped bring like-minded people together in person and on messaging apps such as Telegram in their local areas. She’s a big advocate of building community and commerce networks.

“Relationships are very commerce related,” she said. “So when we talk about underground networking, we’re also talking about … doing commerce with each other. And you know what happens when this gets bigger and bigger and bigger? Do we care if the economy crashes at that point?”

Recently, Sauce posted a message in her local Facebook group asking if anyone was interested in going in together to buy and butcher a cow. Within a few days, enough people had joined in and they filled their freezers with cuts of local beef.

She works together with her immediate neighbors on “projects like grazing sheep, freezing bunnies, fixing each other’s things that go wrong.”

Sauce also advises against pushing people away who don’t share the preparedness mindset.

“If you are an empowering presence in their life, and if you just model a prepared, logical, stable, ‘building the life I want’ … every so often, a light bulb goes on.”

She shared a story about her non-prepper sister in California who called her as wildfires threatened to encroach on her home. Sauce said she suggested storing as much water as possible in containers, the bath, and the hot tub and once the emergency was over, they could discuss a less last-minute, panicked approach.

Adding an extra 5-gallon can of gas to your inventory each week, or even each month, can help alleviate a situation. A resident in Louisiana last year had her car packed ready to drive to Texas after a hurricane, but the tank was empty and the gas stations for miles around were either out or had hours-long waits. She was forced to stay in her home with no electricity and no running water.

It’s better to make decisions about what you’re preparing for and how to prepare based on your family, location, and budget before an emergency hits, the experts say. Do you need to prepare for electricity outages? Food shortages? A hurricane? Economic collapse? Job loss? Political or civil unrest?

Building community and decreasing dependency on the large, corporate systems can help to alleviate problems.

Suggestions on how to build a community include going to a local farmer’s market, meeting your neighbors, joining a club, a social media group, or a community garden.