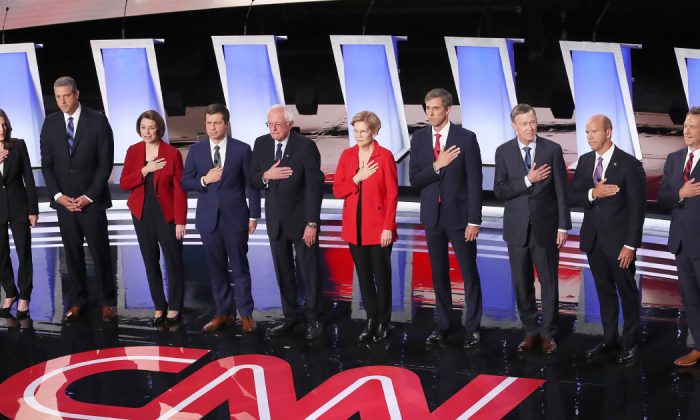 Moderators Should Keep Their Opinions, Partisanship Out of Debates

So far, there have been two Democratic presidential primary debates.

While the different networks apparently select their moderators based on several factors, the obvious bias and partisanship of some of the moderators has led some to question their purpose in the debate and has, ultimately, hurt the American public.

Generally speaking, a “moderator” should be neutral and objective, yet ask tough questions about the important issues.

In describing the ideal type of moderator (the “Master”) in a Brookings Institution blog post, John Hudak, deputy director at the Center for Effective Public Management, stated:

“She controls the pace of and behavior within a debate. She holds candidates accountable for the words in the debate and their words prior to the debate. That moderator will ask pointed, probing follow up questions. This difficult yet skillful approach is not meant to put a candidate in a ‘gotcha’ situation. Instead, the approach demands that candidates communicate with voters and inform them.”

With this definition in mind, it’s a serious question whether some of the moderators fit the bill. For example, prior to the first debate, Fox News host Sean Hannity questioned why Maddow was selected as a moderator, given her constant criticism of the president and her obsession with “Russiagate.” Stated another way, Hannity questioned Maddow’s ability to remain neutral and objective.

“One would think that NBC News, which purports to be a news organization, would go above and beyond to make sure its hosts’ line of questioning was fair and honest, especially given the backlash the network received for its decision to have a far-left pundit moderate a presidential debate.

“Instead, Maddow served up questions about her favorite conspiracy theories including that Miami will be underwater because of global warming and that the Mueller report actually contains secret gems that could still lead to Trump’s prosecution. These are unserious questions unbefitting of a news organization but perfectly suitable for this batch of equally unserious candidates, who made a mockery of themselves and the American people with shameless pandering and outright falsehoods.”

Along these same lines, during the second debate, Lemon’s objectivity and neutrality came under fire after he asked one of the candidates, Sen. Amy Klobuchar (D-Minn.), what she would say to “those Trump supporters who prioritize the economy over the president’s bigotry.”

Lemon’s question serves no purpose. It doesn’t call for a substantive response, fails to address any pressing issues, reeks of bias and liberal partisanship, offends a large number of potential voters, is presumptuous, and has no place on the debate stage.

“CNN was criticized earlier this month when it announced that far-left opinion host Don Lemon would moderate alongside journalists Dana Bash and Jake Tapper, as debate moderators are typically straight-news anchors. Lemon offers his personal anti-Trump views on a nightly basis, so allowing him to grill 2020 hopefuls on a debate stage raised eyebrows across the media landscape.”

Finally, and astonishingly, none of the moderators brought up, or asked about, former special counsel Robert Mueller during the first night of the second debate, despite the Democrats’ alleged strong push to pass articles of impeachment as a result of Mueller’s “findings” and the president’s alleged “wrongdoings.”

According to a CNN employee talking to Fox News:

“CNN flounders now, they’ve no idea what the best anti-Trump message is, given the total meltdown of the Russia narrative, post-Mueller. My internal read is honestly that they’re in despair. They so believed in a Mueller smoking gun. I think they’re slowly realizing that Trump wins again, and they almost can’t fathom that outcome.”

Lemon did ask about Mueller’s report and testimony on the second night, though, after criticism.

The purpose of the debates is to educate the American public, and they deserve better. Toward that end, the moderators should facilitate the discussion and ask tough, relevant questions, not use the time to blast the president and his followers or to ask partisan/biased questions that lack seriousness.

While time constraints and the number of candidates make it difficult to get into too much detail, the debates serve no purpose without these types of questions and a subsequent detailed discussion about the important issues that Americans care about.

This applies across the political spectrum, Republican or Democrat.

As Hannity jokingly noted prior to the first debate: “Here’s what we’re going to do. We’ll have a debate moderated by me, the Great One [Mark Levin], Rush Limbaugh, Jesse [Watters] can join us, and Laura [Ingraham], and Tucker [Carlson]. How’s that?”

While Hannity was joking, his point was abundantly clear.