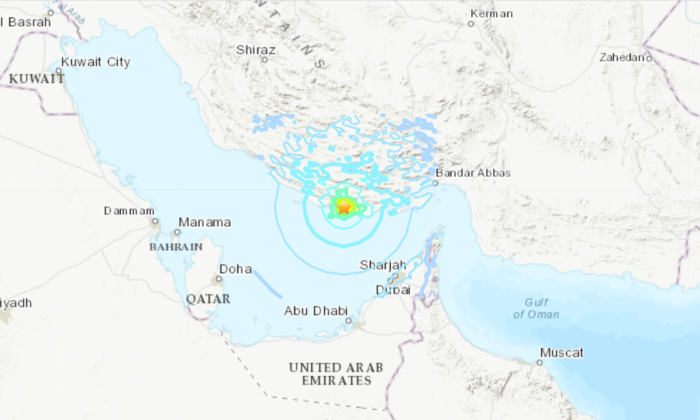 A map showing the location of a 5.6 magnitude earthquake that struck northeast of Kish Island in Hormozgan Province, Iran, on June 25, 2022. (USGS/Screenshot via The Epoch Times)
Middle East

IRNA, quoting the head of the Kish Island hospital, Mostafa Nadealinejad, said four people suffered fractures from falling. One person suffered a concussion, a fracture, and bleeding due to falling from the third floor of a building.

“Despite performing surgeries in the operating room, the person died due to the severity of his injuries,” Nadealinejad said.

Nadealinejad said most of the 31 people who were hurt suffered minor injuries while trying to flee the area.

Kish Island, located in the Persian Gulf, is 1,025 kilometers (some 640 miles) south of Tehran. It has been shaken by weaker temblors several times over the last 10 days, officials said.

Iran lies on major seismic faults and experiences one earthquake a day on average. In 2003, a magnitude 6.6 earthquake flattened the historic city of Bam, killing 26,000 people. A magnitude 7 earthquake that struck western Iran in 2017 killed more than 600 people and injured more than 9,000.