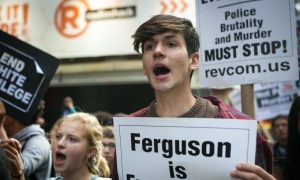 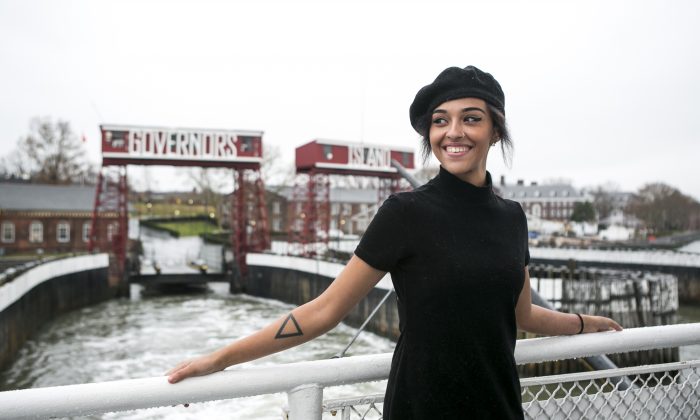 NEW YORK—Leading hundreds of angry teens in protest of the deaths of unarmed black men at the hands of white police officers on Monday was a small collective of highly motivated high school students.

Shana Buckstad, 17, was part of the group. She alone convinced 167 students and four teachers in her school to walk out.

The feat earned her a warning Monday from the principal of her school on Governors Island, for possible suspension.

“You’re the one enforcing it in the school and putting our students in danger,” Shana said she was told. When she got the news, she panicked.

Shana is an overachiever who wakes up at 4:30 a.m. She transferred to New York Harbor School in her junior year to learn marine biology.

She put on a brave face at school where she is student body president, but when she got to her home in Jackson Heights, Queens, she let her anxiety show.

Shana, who is also a part-time model and played a small role on Law and Order when she was 14, said, “My dad was nervous because I’ve never gotten in trouble.”

She then added wryly: “Besides seventh grade—I had one detention.”

In the end she was not suspended, and the principal called it a misunderstanding, she suspected due to media coverage.

Not deterred by the slap on the wrist, later that day, she spoke on the phone with a student protest leader at Bard High School Early College to discuss next week’s protest on Dec. 13.

A Staten Island grand jury decided Wednesday not to indict NYPD officer Daniel Pantaleo for placing Eric Garner in a chokehold during an arrest. The chief medical examiner said the maneuver was a factor in Garner’s death. The decision means more protests.

Although Shana usually works at the Governors Island Alliance every day after school until 7, she said she would leave work early to attend and help lead the 5:30 p.m. Union Square protest Thursday against the grand jury decision.

“Nobody wants to go against the police … [but] the youth finally understand the system is corrupt and they’re not protecting us,” she said.

She is angered by the decisions made by the grand juries in Staten Island and in St. Louis, Mo., not to indict the white officers for killing Garner in New York and Michael Brown in Mo.

“I couldn’t take it. We need to make a statement—ASAP,” she said.

It wasn’t the first time she has spoken out against social inequity. During the Flood Wall Street protests this year she was arrested for yelling. Police later released her in the early hours of the morning. Because it was too late to go home, she headed straight to class.

In addition to her job, school cabinet position, and outside modeling and acting work, Shana is also trying to start a dance club at her high school. Girls would often see her dancing in school and wanted to learn from her, so she wanted to give them the opportunity.

“I haven’t heard back from the school yet,” said Shana, although she submitted her application at the beginning of the school year.

The anecdote is characteristic of the young woman, whose mother is Haitian Native American and whose father is of Norwegian descent. She is constantly testing the limits of how much she can achieve.

For two years, she attended Civic Leadership Academy, located in Elmhurst, Queens, only to find the academics did not challenge her enough.

Now a senior at the Harbor School, Shana has to commute 1 hour and 15 minutes, taking a bus, train, and ferry, to get to school in the morning. It wasn’t easy to make the transfer either, her school principal had to pull strings to let her in.

“I really wanted to be part of this school,” she said, admiring the beauty of the campus. Its large trees, grass, and historical buildings echo the look of many liberal arts colleges, and she is excited by the thought of studying oysters. “I heard about how we’d be able to work in a lab and in the actual harbor and that’s amazing.”

Over the past summer, she worked two jobs, at a food truck, and handing out maps during an internship for the Alliance. She then asked for a more permanent job during the school year and is now working to get more funding from large corporations for the island by making PowerPoints and attending meetings.

Her schedule grew too demanding and she chose to leave the honors level classes for the regular ones. Still, even with the schedule switch, Shana is still getting home at 8 or 9 every night, leaving her little time for sleep.

“I put energy into whatever I’m doing at the moment completely,” she said, “I mean, it wears me out a lot; that’s why I sleep so well at night. But it’s definitely worth it, if change is made. It pays off.”

She is motivated by hearing her classmates discuss current events rather than the latest parties, knowing it signifies change. It is these kinds of improvements to society that she aspires to, rather than padding her application to college.

In fact, Shana might not go to college straight after high school. To avoid taking out loans, she is considering continuing her job at the Alliance and taking a new job afterward. But she is also applying and considering state schools in California where she could go scuba diving.

Shana, who is polished and wise beyond her years, attributed her mental strength and work ethic partly to a rough year she suffered as she was just beginning high school.

The day before she started ninth grade, she had an altercation with her parents, resulting in several injuries.

“I just went to school the next day and I said that I was playing with friends, but they knew that wasn’t it,” she said. School officials decided to send her to foster care and jail her father.

During foster care, Shana lived in three homes in several months. In the first home, in Jamaica, Queens, there was a shooting. Someone banged on the door and one of her foster sisters opened it.

“It was this crazy young boy at the door, with a gun, flailing it around and breaking everything in the living room,” said Shana. “He said he was going to kill everyone.”

Upstairs, she looked down at him thinking she was going to die. Then, she went downstairs to him—and the boy, while crying, put the gun to the middle of her forehead.

“I came downstairs, because I knew I had to protect the people I call family,” said Shana. “I knew I was the only one who could get him to put the gun down.”

Shana was crying too, but she repeated over and over to the boy, “I’m here for you, don’t worry,” comforting him even as she was scared for her life.

Eventually, the boy gave up the gun and embraced her. No one was injured.

He told her to stay by his side from then on, so she had to ride in the police car with him and sit with him while he received a psychiatric evaluation in the hospital. After that Shana never went back, leaving the home and never visiting the boy again.

“I was just too scared to go back,” she said.

Following that traumatic incident, she was then moved to a house in Brooklyn with a Hispanic family who cooked delicious food, and a daughter her age. But, while missing her parents and feeling lonely, Shana grew miserable.

“I don’t know why, but I went through a really deep depression,” she said, “And I ended up going into the hospital for seven months, because I tried to take my life.”

She shared the story in order to help others dealing with similar difficulties.

“I swallowed a lot of pills and I didn’t wake up until two days later, and I was in the hospital with my parents there, and foster parents.”

But the trial wasn’t over. Shana was then moved back to a therapeutic home in Jamaica. She initially thought the house looked nice, but she was bullied by many girls there who stole her things and made the water freezing cold while she showered.

“I ran away from there, and that’s when I was homeless for a few months because I didn’t want to go back,” she said. The police had a warrant out for her. When they finally found her, she insisted on going back to live with her parents, a request that was approved.

Shana said that her parents changed after the whole ordeal. They also realized their daughter had endured suffering beyond her years, and now give her more leeway.

In spite of everything, Shana said she would never let it hold her back, or make her hate everyone.

Instead, she said she concentrates on “just self-perseverance.”

“I just feel like I have to make myself the person I want myself to be. And not worry about where I came from, or my past.”

Her attitude has inspired many in her school, including her friend, Katelyn Francisco, 18, who is also a senior.

When Shana walked into the classroom on the first day of school junior year, Katelyn thought, “Who is she? She looks hot.”

And now, after getting to know the girl, Katelyn was influenced to fight for what she believes in too, such as attending the Monday protest despite the disapproving gaze of authority figures.

“She gives me hope,” Francisco said, tears forming in her eyes.