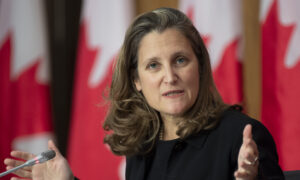 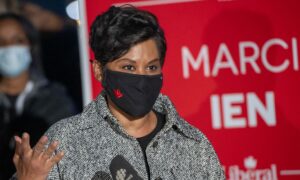 Takeaways From the Federal Byelection Results
0 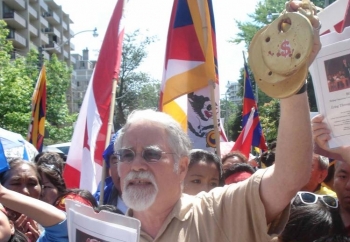 By Diana Hubert
Print
TORONTO—While Beijing was staging the opening ceremony for the 2008 Olympics, in Toronto human rights protesters were awarding gold medals — but not for sporting achievements.

Painted gold, the medals came complete with “bloodstains” and a dollar sign to represent the dampened Olympic spirit.

The mock medals added a bit of humour and light-heartedness to the seriousness of human rights abuses, and were presented to say “you deserve a medal for being the worst of the worst.”

The first medal was presented by Dick Chan from the Toronto Association for Democracy in China. Called the 'We win, you Lose" medal, it was awarded to the People's Liberation Army signifying its “triumph” for killing an estimated 60-70 million people in the name of state security since the communists came to power in China.

The “Muzzling the Masses Award," was presented to the Chinese politburo (the cabinet of the Chinese Communist Party) to represent “excellence” in their achievement in censoring what Craig called “a world record in new forms of censorship of the Chinese
media, restrictions on foreign journalists and creating a convincing campaign of lies and fear, demonizing Uyghur's, Tibetans, and Falun Gong practitioners."

Michael Stainton of the Taiwanese Human Rights Association presented the third medal to the Beijing Olympic Committee. BOCOG received the “Lying Through Their Teeth' award for their extraordinary achievements in deception.

Stainton said that the committee broke its promises to improve human rights and "was followed by an expansion of the police state's cleansing of Beijing of undesirable elements to a degree unknown since the Cultural Revolution." In addition, said Staiton, over 1.2 million Beijing residents were displaced from their homes — largely without compensation — to make way for the Games.

Finally the “Cowardly Lion” award, which came with a picture of the cowardly lion from The Wizard of OZ, was presented to U.S president George W. Bush and French president Nicholas Sarkozy for attending the opening ceremonies and not doing enough to end human rights abuses.

Representatives of groups repressed in China also gave speeches and condemned the Chinese regime for their human rights record.

Alice Huynh of the Falun Dafa Human Rights Association said that since January of 2008, over 8,000 Falun Gong practitioners have been arrested, resulting in at least 130 deaths just prior to the Olympics.

She called on both the media and Canadian citizens to continue to speak out against human rights abuses and to protect the human dignity of every human being.

Speaking on behalf of the thousands of Uyghur Muslims suffering under oppression by the regime, Rukiye Turdush of the Uyghur Canadian Association said that in recent years the persecution of Uyghurs has escalated greatly.

After 1:00 pm, the group moved to the Chinese consulate where Craig again presented the four medals to the respective parties. Tsering Lema from Students for a free Tibet stated that she wants the international community to know that "Tibetans are suffering right now at the same time that this great celebration is happening in Beijing” and asked them not to “get distracted by Beijing's glitz and glamour."

“Right now is a critical time to pressure the Chinese government while they are under an incredible amount of international scrutiny," said Lema.

She commended Prime Minister Stephen Harper for his decision to not attend the Games and urged Canadians and the Canadian government to keep pressuring the Chinese regime to adhere to international human rights values.