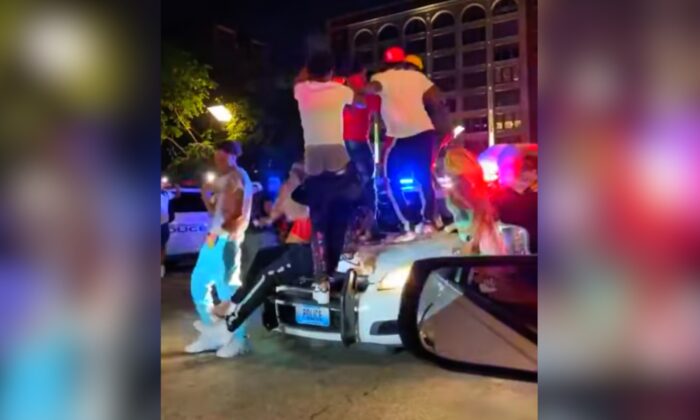 A crowd of party-goers in St. Louis, Missouri, are seen jumping and stomping on top of an officers patrol vehicle on May 23, 2021. (Courtesy of St. Louis Metropolitan Police Department)
Crime and Incidents

Police in Missouri launched a city-wide search effort in St. Louis after a video showed a group of people kicking and jumping on top of an officer’s patrol vehicle while the officer was still inside the vehicle.

The incident happened after dispatchers received a total of 13 calls on May 23 to report a large party of over 100 people on the top floor of an apartment building located on Washington Avenue, the St. Louis Metropolitan Police Department said.

As officers responded to the calls and started to try and disperse the crowd, they began to congregate outside of the building and police had to call in reinforcements after a “mob jumped onto” a patrol vehicle.

“The officer was inside the vehicle at the time, and as you can see in the video, there are multiple individuals kicking and stomping on the police car,” police said. “At one point, an individual was able to open the passenger-side door of the police vehicle. A City-wide ‘Officer in Need of Aid’ call was initiated and numerous vehicles converged on the area.”

The sound of gunshots were also heard in the area shortly after the crowd of party-goers fled from the scene in multiple directions, according to police.

“Thankfully, the officer was not injured, but the damage to the car was substantial,” the department said.

The violence used by some at the party was condemned by St. Louis Mayor Tishaura Jones, who addressed the incident in a series of posts on social media.

“Our office has reviewed the video of people jumping on our patrol cars this weekend,” Jones said. “While I’m thankful @SLMPD responded quickly and dispersed the crowd without conflict or injury, I’m disappointed in those people who will now have to face consequences for their behavior.”

“Let me be clear: You can go out and have a good time without all this nonsense,” she said. “If we are committed to building a stronger city, we need to show some courtesy and respect.”

Police in St. Louis is now asking for the public’s help in identifying anyone in the video. People with information can leave an anonymous tip at 866-371-8477 or call the department directly at 314-444-2500.