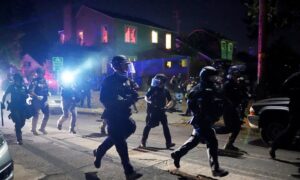 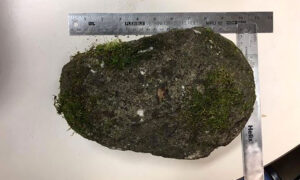 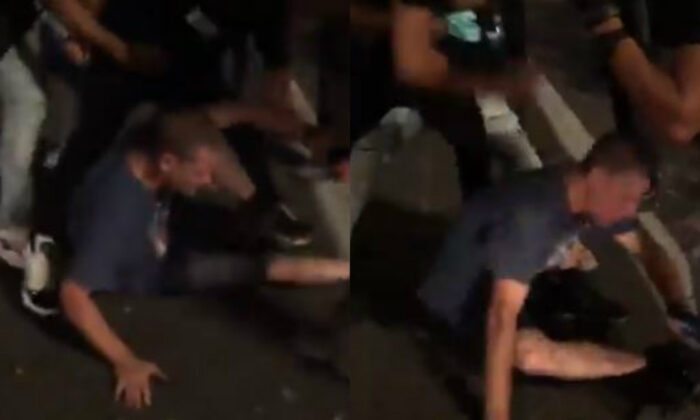 A man is punched repeatedly in Portland, Ore., on Aug. 16, 2020. (Drew Hernandez via The Epoch Times)
Crime and Incidents

A mob assaulted at least three people in Portland overnight as wanton violence continued to shake the city.

Some in the crowd wore “Black Lives Matter” shirts while others were dressed in all black, a style favored by the far-left, anarcho-communist group Antifa.

According to Drew Hernandez, an independent reporter, the mayhem started when Black Lives Matter activists ejected a man from the protest and began to assault him.

When a witness urged people to stop, they turned on her, robbing and assaulting her.

“We out here for black lives matter, [expletive] these white [expletives]” one man shouted.

A man who tried to stop the mob from hitting the woman soon got into his truck. The mob then assaulted another woman.

People banged on the truck, telling the man to leave.

He sped away but crashed within a few blocks into a tree, leaving the vehicle undriveable.

After the driver crashed and exited the vehicle, men with “security” affixed on their outfits shoved him to the ground.

He was then punched and kicked repeatedly, until he lay on the pavement, bleeding heavily and unresponsive.

“[Expletive] this [expletive],” one man with “security” affixed to his person said as he punched the man several times in the face. The assailant was furious because the driver insisted he was only trying to drive away from the protest. Some people disputed this account, claiming the man was trying to run people over.

Before the man sped away from the group and crashed into the tree, a female companion was assaulted by multiple people.

“Police response was complicated by a hostile group, requiring additional officers to safely investigate,” the bureau said in a statement.

Officers attempting to respond to a report of people assaulting the truck driver at 10:27 p.m. were forced to wait until a rapid response squad deployed to help secure the scene from the hostile crowd.

The driver was rushed to the hospital by ambulance with serious injuries.

The incident is under investigation. No arrests have been made.

Other than making the area safe for employees getting in and out of the building, officers did not interact with the crowd.

Unrest in Portland, a city of about 653,000, has continued virtually unabated on a nightly basis since May 28.

Demonstrators gathered downtown on Sunday night and held what police said was a peaceful rally and speeches before blocking streets. Participants vandalized the Central Precinct and hurled objects at the building. The unruly behavior took place just a few blocks from where the assaults happened.

The night before, rioters threatened to burn down police precincts if their demands, which remain unclear apart from defunding the police, remain unmet.