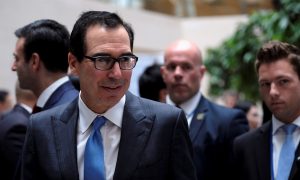 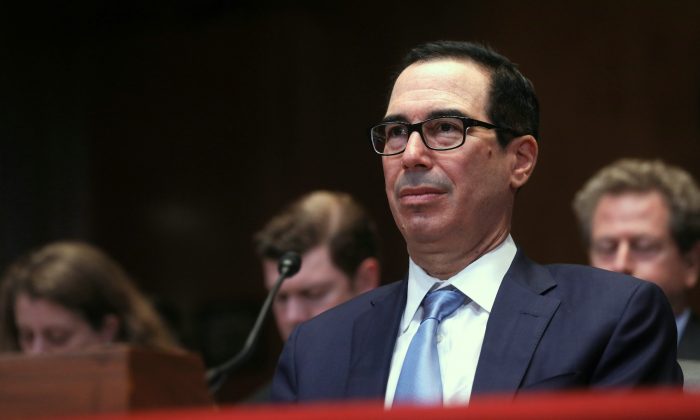 The U.S. Department of Justice asserted in a legal opinion released June 14 that Treasury Secretary Steven Mnuchin’s refusal to hand over President Donald Trump’s tax returns to Congress was not in violation of the law.

House Ways and Means Committee Chairman Richard Neal (D-Mass.) had issued a subpoena demanding the administration turn over six years of Trump’s returns. But last month, Mnuchin refused to comply with the subpoena, saying that the request “lacks a legitimate legislative purpose” as Supreme Court precedent requires, and that the Justice Department is “not authorized to disclose the requested returns and return information.”

The Justice Department’s Office of Legal Counsel in its 33-page legal opinion (pdf) said that because the confidentiality of tax returns is protected under the law, Mnuchin did not violate the law in refusing the subpoena.

The legal opinion stated that federal law “protecting [the] confidentiality of tax returns [had] prohibited the Department of the Treasury from complying with a request by the Chairman of the House Ways and Means Committee for the president’s tax returns.”

It also added that Neal had wanted to make the president’s tax returns public and because of that plan, the request was actually not to carry out a legitimate legislative function.

Assistant Attorney General Steven Engel, who heads the Office of Legal Counsel, wrote in the opinion: “While the Executive Branch should accord due deference and respect to congressional requests, Treasury was not obliged to accept the committee’s stated purpose without question, and based on all the facts and circumstances, we agreed that the committee lacked a legitimate legislative purpose for its request.”

The legal opinion supports the position already taken by the Treasury Department.

Neal said last month that he didn’t plan to hold Mnuchin in contempt. Instead, he said the committee may pursue a legal fight to force the Treasury Department to turn over the documents.

Neal’s request is one of a battery of efforts by Democrats targeting Trump that they initiated after gaining control of the House of Representatives in the 2018 midterm elections. Trump refers to these efforts as “presidential harassment.”

Taxpayers are entitled to keep their tax returns private. Neal’s committee is empowered to request tax returns, but the law requires the committee to cite a valid legislative purpose.

In response to Neal’s initial request for the president’s tax returns, Trump’s personal attorney, William Consovoy, had argued against the release, writing that the request fails to provide a legitimate purpose, is driven by an intent to score political points, and sets a dangerous precedent for the privacy rights of both politicians and private citizens alike.

“Ways and Means has no legitimate committee purpose for requesting the president’s tax returns or return information,” Consovoy wrote in a letter to the legal counsel of the Treasury Department.

“His request is a transparent effort by one political party to harass an official from the other party because they dislike his politics and speech.”

Earlier in April, Trump retweeted video footage that shows Rep. Jim Jordan (R-Ohio) saying in an interview, “There’s no law that says they have to be public,” referring to Trump’s tax returns.

Rep. @Jim_Jordan on President Trump’s tax returns: “There’s no law that says they have to be public.”

In early April, acting White House Chief of Staff Mick Mulvaney told Fox News that the issue of Trump’s tax returns has drawn partisan anger from the Democrats, in response to a question about if the party will succeed in obtaining the sitting president’s finances. Mulvaney described the renewed efforts from Democrats as a “political stunt.”

“They know that they are not going to get this, they just want the attention on the issue because they don’t want to talk to us about policy,” he said. “[Trump] could always allow people to see it. That’s not what’s happening here. The Democrats are demanding that the IRS turn over the documents. That is not going to happen, and they know it. This is a political stunt.”

Trump didn’t entirely rule out the possibility of providing six years’ worth of his tax returns. Speaking to reporters at the White House on April 3, he said: “Is that all? Usually, it’s 10 years.”

“So I guess they’re giving up,” he added.

Trump has said that he will not release his tax returns while they are under audit by the IRS.

“We’re under audit, despite what people said, and we’re working that out—I’m always under audit, it seems, but I’ve been under audit for many years, because the numbers are big, and I guess when you have a name, you’re audited. But until such time as I’m not under audit, I would not be inclined to do that [release tax returns],” Trump said April 3.

Ivan Pentchoukov, The Associated Press, and Reuters contributed to this report.