Mnuchin: US Economy Will ‘Really Bounce Back’ in Summer Months 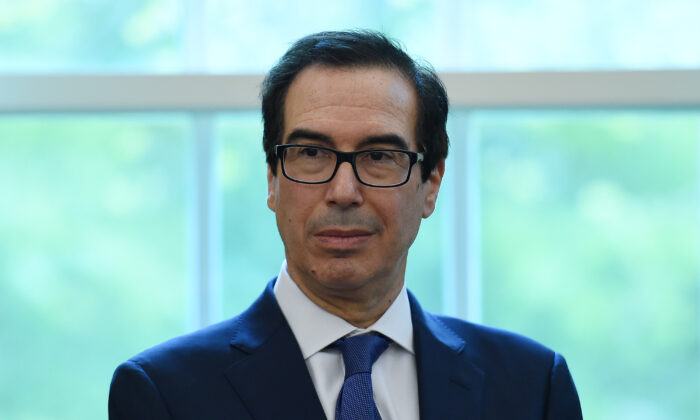 Treasury Secretary Steven Mnuchin on April 26 said that he expects the U.S. economy will “really bounce back” after the United States begins to reopen the economy in the coming months.

Mnuchin said he predicts that the trillions of dollars in federal rescue funds in response to the CCP virus pandemic will pay off as the economy comes roaring back in the summer months.

“I think as we begin to reopen the economy in May and June, you’re going to see the economy really bounce back in July, August, September,” Mnuchin told Fox News.

“And we are putting in an unprecedented amount of fiscal relief into the economy,” he said. “You’re seeing trillions of dollars that’s making its way into the economy, and I think this is going to have a significant impact.”

The Senate on April 21 negotiated a $484 billion CCP virus relief package, which includes aid for small businesses and hospitals, and funds for increased virus testing. The nearly half-trillion-dollar package was added to the $2.2 trillion rescue package passed by Congress in March to mitigate the economic effects of the pandemic.

Mnuchin’s assessment downplayed a prediction from Goldman Sachs that the overall global impact of the CCP virus will be four times worse than the economic crash of 2008, as well as Congressional Budget Office (CBO) projections of high unemployment—16 percent in the third quarter—and low GDP. The CBO sees next year’s jobless rate still averaging above 10 percent.

A record 26.5 million Americans have filed for jobless benefits since mid-March, and retail sales, homebuilding, and consumer confidence have cratered. Before the pandemic, the U.S. jobless rate had been hovering at a 50-year low of 3.5 percent.

“All these models are based on health assumptions, how quickly we reopen, so we’ll see,” Mnuchin said. “As businesses begin to open, you’re going to see demand side of the economy rebound.”

His comments came amid warnings from White House economic adviser Kevin Hassett about the impact and long-term effects of the pandemic lockdowns.

“This is the biggest negative shock that our economy, I think, has ever seen. We’re going to be looking at an unemployment rate that approaches rates that we saw during the Great Depression,” he said.

Hassett added that debt levels have reached a point where “it can be a long-term negative for growth,” which should be dealt with along with short-term stimulus in the next phase of legislative action.

“Again, you have to understand that this is an unprecedented shock to the economy, that we’re going to be looking at second-quarter negative GDP growth that’s probably north of minus 15, minus 20 percent,” he said.

“It’s the biggest negative shock that we’ve seen since the World War II, and with that kind of emergency, the good news is we’ve got this bipartisan action, this build-a-bridge-to-the-other-side, but there’s still going to be a heck of a lot of other problems that pop up.”

President Donald Trump said on April 22 that the U.S. economy would come back “stronger than ever before” and pouring money into fighting the CCP virus was a move necessary to be able to reopen the economy.

“We had the greatest economy in the history of the world … and we had to close it. Now we’re going to open it again,” Trump said. “We’re going to be just as strong or stronger. But you have to spend some money to get it back open.”