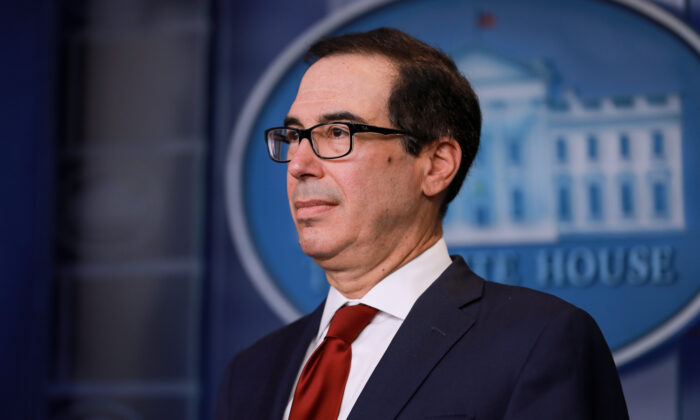 Secretary of the Treasury Steve Mnuchin at a media conference in the White House briefing room in Washington on Jan. 10, 2020. (Charlotte Cuthbertson/The Epoch Times)
AMERICA

Mnuchin: States Can Take Out Loans to Cover Revenue Lost to Pandemic

Mnuchin said President Donald Trump and Republicans won’t support aid for states to cope with financial issues that are unrelated to the CCP (Chinese Communist Party) virus outbreak. He said those states should get a loan from the Federal Reserve.

“There is not going to be bipartisan support that bails out states from previous problems,” Mnuchin told CNBC on May 11.

“With interest rates very, very low, states can borrow this money,” he continued, adding that some states will have to enact more spending cuts.

House Speaker Nancy Pelosi (D-Calif.) and other top Democrats have said that state and local governments should receive bailouts in the next round of stimulus legislation. Last month, Congress passed a bill that allotted $2.2 trillion to offset a number of different economic losses as people are laid off or furloughed from work, or as small businesses shutter.

A number of states are facing significant budget shortfalls due to rising unemployment claims as well as costs associated with slowing the spread of the CCP virus, commonly known as the novel coronavirus and which emerged in Wuhan, China, in 2019.

While Trump and most GOP lawmakers have said that states shouldn’t be bailed out for mismanagement, they haven’t provided any details about supplementing lost revenue suffered during the pandemic.

Trump and other White House officials are discussing how to handle the loss in revenue by states, Mnuchin said in the interview.

“The CARES Act gave a lot of money to the states, and that money was intended not for lost revenues. It was intended for COVID-related issues,” he said, referring to the $2.2 trillion package that was passed and signed by Trump in March. “One of the reasons I do feel comfortable with us spending all this money is because interest rates are very low. And we’re taking advantage of long-term rates.”

The Treasury secretary warned on May 10 that there could be “permanent economic damage” if the U.S. economy doesn’t reopen quickly enough.

“I think there’s a considerable risk of not reopening. You’re talking about what would be permanent economic damage to the American public,” he said on “Fox News Sunday.”

On May 8, the Labor Department issued a jobs report that found that nearly 15 percent of people are unemployed, while at least 20 million filed for unemployment insurance in April.

Mnuchin, however, predicted there would be a rebound.