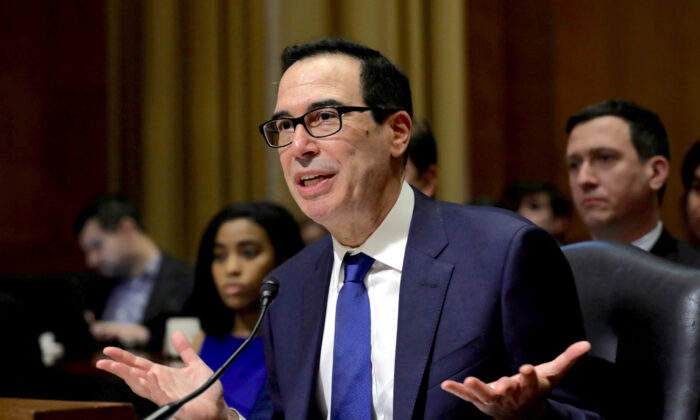 Treasury Secretary Steven Mnuchin said Monday that a deal between Democrats and Republicans was “very close” to being hammered out on the COVID-19 economic stimulus package.

“I think we’re very close. We need to get this deal done today,” Mnuchin told CNBC’s Jim Cramer on Monday, March 23, adding that while existing funds had already been deployed to soften the blow of the CCP virus, “we need Congress to approve additional funds today.”

The Epoch Times refers to the novel coronavirus, which originated in Wuhan, China and causes the disease COVID-19, as the CCP virus because the Chinese Communist Party’s (CCP) coverup and mismanagement of the outbreak fueled its spread throughout China and across the world.

Speaking to CNBC, Mnuchin said small businesses were already getting help in the form of loan support.

“We are providing immediate loans to small businesses. We’re working with the [Small Business Administration]. We’re going to make sure that banks can immediately lend money … as long as those companies hire back their workers or keep their workers,” Mnuchin told CNBC Monday.

“At the end of that period, we will forgive those loans entirely,” he said. “We want to make sure that small businesses, which represent about 50% of the private economy, keep workers employed. So when the president is ready to open up this economy again and we’ve killed this virus, workers are in place. It’s no fault of theirs: They’re getting paid.”

“I didn’t expect to be starting off my week with such a dire message for America,” Surgeon General Jerome Adams said on CBS This Morning, as he warned the numbers will grow worse this week. “Things are going to get worse before they get better. We really need everyone to understand this … and lean into what they can do to flatten the curve.”

According to data collected by Johns Hopkins University, as of Monday morning, there were over 35,000 confirmed COVID-19 infections in the United States and 473 deaths.

Administration officials and congressional leaders were to resume talks at 9 a.m. ET after working through the night on the economic rescue plan. Democrats had derailed the plan Sunday night, arguing it was tilted toward corporations and did too little to help workers and health care providers.

Mnuchin exited the Capitol just before midnight, striking an optimistic note, adding negotiators would work through the night.

“Our nation cannot afford a game of chicken,” warned Senate Majority Leader Mitch McConnell (R-Ky). His goal is to vote Monday. The Senate will re-convene at noon.

Senate Democratic Leader Chuck Schumer (D-N.Y.) sounded an optimistic note on the prospect the sides would reach a deal soon, but said there were shortcomings in the proposal that needed fixing.

“This bill is going to affect this country and the lives of Americans, not just for the next few days, but in the next few months and years—so we have to make sure it is good,” he said.

Schumer said there were some “some serious problems with the bill leader McConnell laid down,” including what he said were “huge amounts of corporate bailout funds without restrictions or without oversight—you wouldn’t even know who is getting the money.”

He said insufficient funds had been proposed for hospitals and nurses, including personal protective equipment like masks. “No money for state and local government, many of whom would go broke. Many other things,” Schumer said.

But Schumer also said they were making progress in dealing with those issues. “We’re getting closer and closer. And I’m very hopeful, is how I’d put it, that we can get a bill in the morning.”