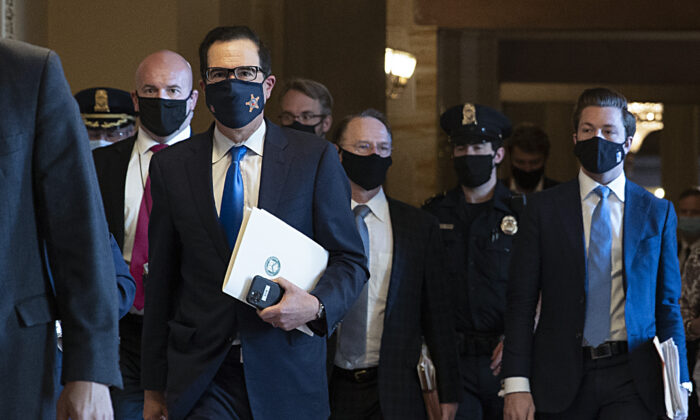 The two “spoke by phone at 9:33 a.m.,” Hammill wrote. “The secretary inquired about a standalone airlines bill. The speaker reminded him that Republicans blocked that bill on Friday [and] asked him to review the DeFazio bill so that they could have an informed conversation,” referring to Transportation and Infrastructure Committee Chairman Peter DeFazio (D-Ore.), who tried to pass an airline funding provision by unanimous agreement. He was rejected on the procedural grounds that he did not have an agreement from GOP leaders.

The bill, titled the Moving Forward Act, calls for a $500 billion investment for transportation infrastructure.

On Tuesday, Trump said he wanted to wait until after the election in November to pass another financial aid bill to stimulate the economy during the CCP (Chinese Communist Party) virus pandemic. Hours later, he called on Congress to pass standalone bills for $1,200 checks and airline funding.

“If I am sent a Stand Alone Bill for Stimulus Checks ($1,200), they will go out to our great people IMMEDIATELY. I am ready to sign right now. Are you listening Nancy?” he wrote, referring to Pelosi while also tagging White House chief of staff Mark Meadows, Senate Majority Leader Mitch McConnell (R-Ky.), House Minority Leader Kevin McCarthy (R-Calif.), and Senate Minority Leader Chuck Schumer (D-N.Y.).

American Airlines, United Airlines, and other airlines announced they would furlough or eliminate tens of thousands of workers. The airlines agreed not to cut any jobs until Oct. 1 under a bill that was passed in March.

Some airline companies said they would reverse furloughing their workers if Congress approves more aid.

Meadows told reporters that “the stimulus negotiations are off,” echoing Trump’s proclamation on Tuesday, and said in an interview on Fox News that the Trump administration backed a more piecemeal approach.

But in a separate interview with CNBC, White House economic adviser Larry Kudlow said in reference to the chances of such a piecemeal package before the Nov. 3 presidential election, “Right now in terms of the probability curve, this would probably be low, low probability stuff.”