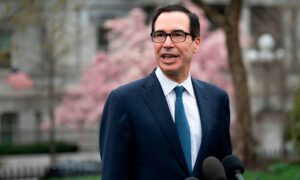 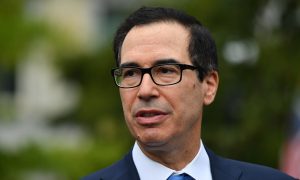 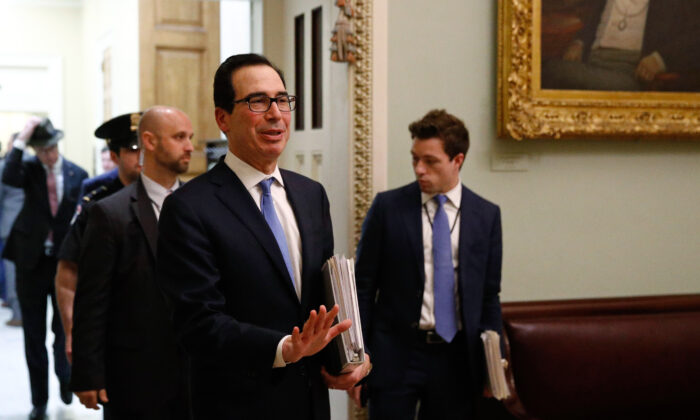 Treasury Secretary Steve Mnuchin asks members of the media to practice social distancing, as he departs a meeting on Capitol Hill in Washington on March 16, 2020. (AP Photo/Patrick Semansky)
AMERICA

Lockdown Could Last 10 to 12 Weeks, He Says
By Jack Phillips
Print

Treasury Secretary Steven Mnuchin said that as businesses continue to close and people lose their jobs over the CCP virus lockdown affecting parts of the United States, a family of four could receive $3,000 as well as unemployment insurance following the passage of a new stimulus package.

“I think we have a fundamental understanding and we look forward to wrapping it up today,” Mnuchin told “Fox News Sunday,” adding that he expects the country to stay on lockdown for “a 10- to 12-week scenario.”

“You need to retain them. You’ll also get some overhead. And if you do that, those loans will be forgiven,” Mnuchin said. “That will allow small businesses to keep people, and make sure when we open up the economy, they’re up and running.”

In the interview, he said that up to $3,000 could be provided to families, for a family of four, via direct deposits. “Enhanced unemployment insurance” will also be provided for those who were laid off, he said.

Mnuchin told Fox that the next part involves “a significant package working with the federal reserve” that will allow “up to $4 trillion of liquidity that we can use to support the economy.”

The governors of New York, California, New Jersey, Illinois, and others instituted statewide lockdowns to contain the spread of the virus. A number of businesses deemed nonessential were closed—except for banks, restaurants that serve takeout or via drive-through, grocery stores, hardware stores, and others, which means that a number of people have been laid off and have been forced to collect unemployment insurance.

New York announced on March 20 that it’s experiencing an “unprecedented increase” in unemployment claims, which caused outages and disruptions.

“We need to get the money into the economy now. If we do that, we think we can stabilize the economy,” Mnuchin said on the program. “I think the president has every expectation that this is going to look a lot better four or eight weeks from now.”

The Treasury Department has already announced that the tax filing date will be pushed back 90 days to July 15.