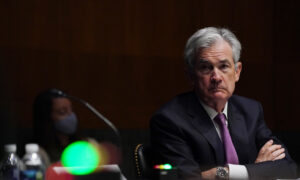 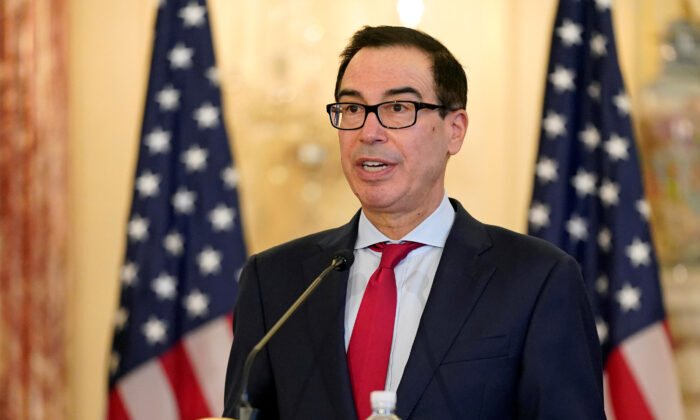 Treasury Secretary Steve Mnuchin speaks during a news conference to announce the Trump administration's restoration of sanctions on Iran, at the State Department in Washington on Sept. 21, 2020. (Patrick Semansky/Pool via Reuters)
Economy

Treasury Secretary Steven Mnuchin urged lawmakers to redirect unspent stimulus money allocated by Congress under the CARES (Coronavirus Aid, Relief, and Economic Security) Act to provide targeted support to parts of the U.S. economy that have been hardest-hit by the pandemic.

“I hope that Congress will seriously consider reallocating $580 billion of funds that have already been appropriated that wouldn’t cost taxpayers an additional penny,” he said in a phone interview on Nov. 19, as cited by Bloomberg.

Mnuchin suggested the unspent funds could be used to help small businesses in the entertainment, travel, and restaurant industries, as well as to extend unemployment insurance.

“I believe it will have a significant impact for people whose businesses have been impacted by COVID—they can then get through to the beginning of next year when we will have vaccines broadly distributed and fully reopen the economy,” Mnuchin said, according to the outlet.

The Treasury secretary’s remarks came after he announced he wasn’t going to extend past Dec. 31 most of the Federal Reserve’s emergency lending programs, which are jointly operated by the Treasury and the Fed. In a letter to Fed Chairman Jerome Powell (pdf), Mnuchin called on the Fed to return to government coffers unused funds from five programs that used CARES Act funding, saying that the capital and liquidity position of American banks was solid enough to meet the borrowing needs of customers.

“This will allow Congress to re-appropriate $455 billion, consisting of $429 billion in excess Treasury funds for the Federal Reserve facilities and $26 billion in unused Treasury direct loan funds,” Mnuchin said in a statement.

He added that in the “unlikely event” that any of the five facilities would need to be revived, the Fed could make a request to the Treasury Secretary and reestablish them under a new agreement. Mnuchin also said that two of the programs would be extended by three months.

“In an abundance of caution, however, I am requesting that the Board of Governors of the Federal Reserve approve an extension of the two facilities that used Core ESF funding (CPFF and MMLF) and the two facilities that did not require Treasury funding (PDCF and Paycheck Protection Program Liquidity Facility) for a period of an additional 90 days,” Mnuchin wrote in the letter.

The Fed made public its opposition to the cancellation of the five programs, saying in a statement: “The Federal Reserve would prefer that the full suite of emergency facilities established during the coronavirus pandemic continue to serve their important role as a backstop for our still-strained and vulnerable economy.”

Some critics saw politics at play in Mnuchin’s decision, saying the action would hobble what could be, once pending legal challenges to the contested election are settled, a new administration by depriving it of critical support the Fed might provide to prop up the economy.

“A surprise termination of the Federal Reserve’s emergency liquidity program, including the Main Street Lending Program, prematurely and unnecessarily ties the hands of the incoming administration and closes the door on important liquidity options for businesses at a time when they need them most,” Neil Bradley, executive vice president of the U.S. Chamber of Commerce, said in a prepared statement.

“Congress’s intent was clear: These facilities were to be temporary, to provide liquidity and to cease operations by the end of 2020,” Toomey said in a statement. “With liquidity restored, they should expire, as Congress intended and the law requires, by Dec. 31, 2020.”