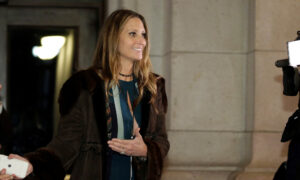 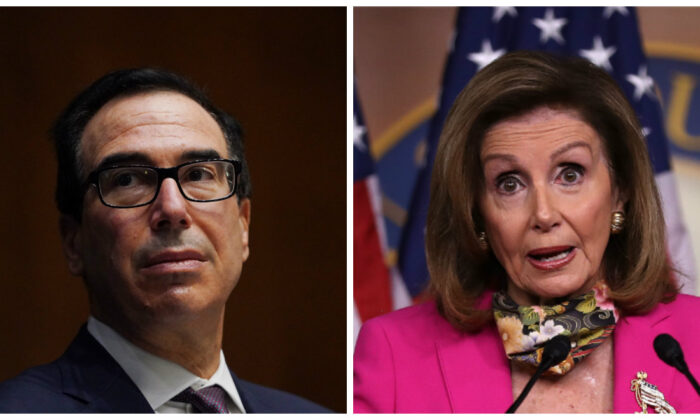 House Speaker Nancy Pelosi (D-Calif.) and Treasury Secretary Steven Mnuchin spoke on Oct. 14 without coming to an agreement on a pandemic stimulus bill.

According to Pelosi spokesman Drew Hammill, the discussion lasted about an hour.

“In response to proposals sent over the weekend, the two spent time seeking clarification on language, which was productive,” Hammill said in a statement. “One major area of disagreement continues to be that the White House lacks an understanding of the need for a national strategic testing plan.”

Pelosi has come under increasing pressure after the White House proposed a stimulus package worth about $1.8 trillion, or about $400 billion less than the $2.2 trillion package that was passed by House Democrats several weeks ago. In a lengthy statement on Oct. 13, Pelosi accused the Trump administration of being unserious.

“The American people want us to have an agreement to protect lives, livelihoods, and the life of our American Democracy. Democrats are determined to do so,” she said.

Rep. Ro Khanna (D-Calif.) and former Democratic presidential candidate Andrew Yang both encouraged Pelosi to take the White House’s offer, which she rejected. In a CNN interview on Oct. 13, when pressed by anchor Wolf Blitzer about the package, she replied that it “isn’t what we’re going to do, and nobody’s waiting until February.

“I want this very much now, because people need help now, but it’s no use giving them a false thing just because the president wants to put a check with his name on it in the mail,” she told CNN. “We’re talking about the consequences of a pandemic, that the symptoms of a problem that the president refuses to address.”

If the White House’s deal is taken up by the House, it may not have enough votes to pass in the Senate, said Majority Leader Mitch McConnell (R-Ky.).

“So far they have said if we can’t do everything we want to do, we won’t do anything,” McConnell told reporters on Oct. 13. “That doesn’t solve the problem.”

Pelosi and the White House have been holding talks intermittently for the past several months on how to craft another deal to stimulate the economy in the midst of the CCP (Chinese Communist Party) virus pandemic. Numerous state and local officials this year have implemented stay-at-home orders and shut down businesses in a bid to curb the spread of the virus.