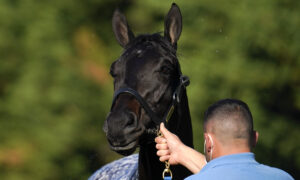 MMA Fighter Who ‘Died’ in the Cage Speaks Out

Clovis “C.J.” Hancock, the man who said that he “died” while fighting an MMA bout last week, has opened up about what happened.

The 32-year-old collapsed during a regional Legacy Fighting Alliance promotion, and it was later determined he went into cardiac arrest and his kidneys failed. Medical professionals said that he was dead for five minutes inside the cage, and he does not remember anything until he woke up, according to Bleacher Report.

Hancock said that it was likely caused by his weight cut of 45 pounds in around a week, which includes 15 to 20 pounds of water weight. He needed eight bags of saline to re-hydrate. He typically “walks around” at 215 pounds and was trying to make 170 pounds at welterweight.

“I probably won’t be able to fight again,” Hancock told the website, “because I was stubborn.”

Shout out to my guy @CompleteCutman. The @LFAfighting cutman saved a fighter’s life when he went into cardiac arrest. #LFA26 @AXSTVFights pic.twitter.com/pkA2zsh5pl

“Going into the fight I knew he had three times as many fights as me, but I knew I had better wrestling and jiu-jitsu,” Hancock said of his opponent Charlie Ontiveros.

But during the fight, things got strange, he said.

“I was getting dizzy and sick but I thought I could power through,” he told Bleacher Report. “I knew weight cutting was dangerous, but I didn’t know that anything like this would ever happen to me. I knew other people who went through something like this, but I was tough.”

“As soon as I clinched up with him, I knew I just wasn’t there,” he added. “I had no strength. I remember the second round. I was feeling dizzy, but I thought I was fine.”

According to a Facebook post last week, he was then taken to Memorial Hermann Southwest Hospital in Houston. They found out that he had suffered kidney failure.

“Well I died tonight in the cage,” he wrote on his page. “I’m OK. Thanks everyone. I’ll reply when I can. My heart stopped, and I had kidney failure. They did CPR and hit me with the EKG twice and brought me back.”

Hancock said that he’s now home from the hospital and is on total rest for six weeks.

“My girlfriend has been here taking care of me,” Hancock said. “I just want to thank her and all my coaches and trainers.”

“Honestly, this has given me motivation and a push to show people said there was a reason I was brought back,” Hancock said. “Someone was looking out for me up there. There’s something else I have to do on this planet. I could be an advocate against weight cutting. Kids do that when they’re wrestlers. Maybe that’s why I came back. I’m not sure what it is yet, but I’m going to figure it out.”