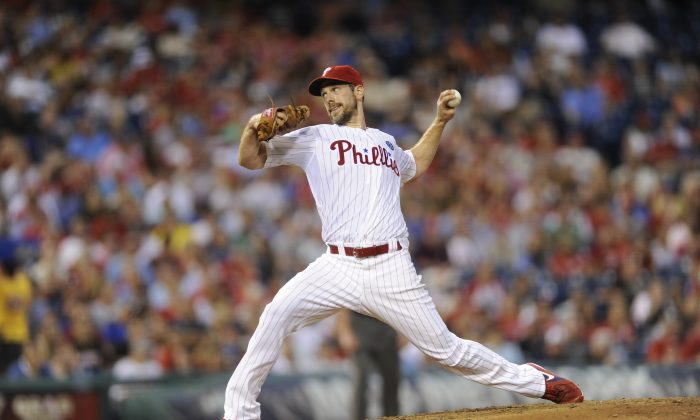 The MLB trade rumors are flying ahead of the July 31 deadline.

Lee is being pursued by multiple teams, and linked to others.

The New York Yankees are one team that really needs a pitcher, and the New York Daily News suggested that the team acquire Lee.

The Yankees have also been linked to David Price, among other names.

“Lee’s injury issues — he’s been on the DL for the past month but hopes to return before the All-Star break — might make him the ultimate risk-reward candidate, as the Phillies could look to deal him for pennies on the dollar prospect-wise in order to save themselves a few billion actual pennies,” the News said.

“If we were still talking about the $189 million plan, Lee would be an afterthought. But given the Yankees’ decision to blow past the luxury tax threshold over the winter, adding Lee’s massive salary in an attempt to win again wouldn’t seem to be out of the question — especially if it didn’t cost them a bundle of top prospects to acquire him.”

Lee came off the disabled list for his first start since May 18, reported CSN Philly.

“The Phillies are in full sell mode, and Lee is an attractive potential pickup for a contending team,” it reported.

“However, two months on the DL right before the July 31 trade deadline doesn’t help Lee’s trade value. He will have just two starts to audition for contending clubs who must weigh his health and effectiveness against the $37.5 million that he is guaranteed after this season.” Lee was reportedly rusty at the game.

The Chicago Cubs are among the teams being linked to Price, as are the Seattle Mariners and Cleveland Indians.

Price’s agent Bo McKinnis has said that his client doesn’t want to sign a long-term extension with the Mariners, but the Mariners don’t see it as a problem “because they would have Price for the remainder of this year and next,” according to the Boston Globe.

“The Cardinals have shown interest but would want a financial commitment, according to a major league source. Don’t rule out the Giants, who also have had interest in Ben Zobrist to solve their second base situation. The Rays, however, know they need top value in return, just as the Phillies would need for Hamels.”

Trying to add offense at third base, the New York Yankees have acquired Chase Headley from the San Diego Padres for infielder Yangervis Solarte and right-hander Rafael De Paula.

The 30-year-old Headley can become a free agent after this season. He’s hitting .229 with seven homers and 32 RBIs but has a .339 average since July 4. He was a Gold Glove winner two years ago, when he hit .286 with 31 homers and a National League-leading 115 RBIs.

One of the better pitchers left on the trade block, Kennedy could land at the Kansas City Royals or Pittsburgh Pirates, who had scouts at a recent Kennedy game, reported Ken Rosenthal of Fox.

However, other reports say that Kennedy isn’t going anywhere.

The San Diego Union-Tribune says that it’s “highly improbable” that the Padres would get a sufficient offer for Kennedy.

Castro of the Chicago Cubs is not likely to be traded despite rumors to the contrary, reported Newsday.

A source familiar with the Cubs thinking said that Castro will probably not be traded this season.

The source also said that Castro could be moved to third base in 2015.

Fox Sports first noted that a number of teams were interested in the Texas Rangers closer Soria, but some of those teams made other signings.

The Detroit Tigers are still interested in acquiring him, though, said Jon Morosi of Fox Sports.

Another potential destination is the Royals, who had a scout at a recent Rangers game, reported Evan Grant of the Dallas Morning News.