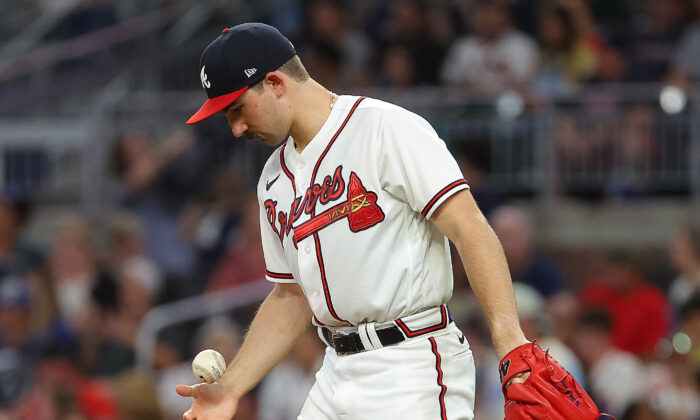 Spencer Strider (65) of the Atlanta Braves picks up the ball as he prepares to warm up before pitching in the eighth inning against the Colorado Rockies at Truist Park in Atlanta on Sept. 1, 2022. (Kevin C. Cox/Getty Images)
Baseball

Rookie Spencer Strider pitched eight scoreless innings and set a franchise record for a nine-inning game with 16 strikeouts as the Atlanta Braves beat the visiting Colorado Rockies 3–0 on Thursday.

Strider (9–4) posted the highest strikeout total by a Braves pitcher since the franchise moved to Atlanta.

Hall of Famer Warren Spahn struck out 18 in 15 innings for the Boston Braves against the Chicago Cubs on June 14, 1952.

It was Strider’s fifth game with double-digit strikeouts, giving him 174 whiffs in 114 2/3 innings. Strider set a career high by working eight innings.

He allowed two hits and did not walk a batter. It was the 12th time in his 17 starts that the right-hander allowed no more than one run.

The Braves hit two homers for the second straight night. Austin Riley went deep for the second consecutive game, giving him 33, and Michael Harris II hit his 14th, his first since Aug. 22, to provide the bulk of the offense.

Five Boston batters had multiple hits, including Alex Verdugo, who went 3–for–4 with a home run and three runs. Christian Arroyo had a double and three RBIs as part of a 2–for–4 night, while Rafael Devers doubled twice and drove in three, breaking a 0–for–24 skid.

Marcus Semien went 3–for–5, Corey Seager, Nathaniel Lowe and Bubba Thompson all had two hits and Adolis Garcia homered for the Rangers.

Darin Ruf lofted the tiebreaking sacrifice fly in the sixth inning for the host New York, which beat Los Angeles in the rubber game of a three-game series between the top two teams in the National League.

The Mets, who scored twice apiece in the sixth and seventh, won the season series four games to three. Chris Bassitt (12–7) threw six innings of two-run ball for the win, and Adam Ottavino fired a hitless ninth for his third save.

The Dodgers lost back-to-back games for the first time since they fell to the Washington Nationals July 25–26. Chris Martin (4–1) took the defeat in relief.

Gilbert (11–5) ended a streak of nine winless starts while holding the Tigers to two hits and recording nine strikeouts. He hadn’t recorded a victory since July 5.

Tigers starter Eduardo Rodriguez (3–4) gave up six runs (five earned) and six hits in four innings. Detroit was shut out for the 18th time this season.

Josh Rojas added a two-run double for the Diamondbacks, who won for the seventh time in the past nine games.

Jace Peterson had two hits for the Brewers, who had Christian Yelich depart after 3 1/2 innings due to neck discomfort.

Andrew Vaughn’s two-run homer broke a 1–1 tie and helped lift host Chicago to a victory over Kansas in the finale of a three-game series.

The White Sox claimed the series with the victory, but the Royals still won the season series 10–9.

Joey Meneses capped a four-hit day with a three-run home run in the 10th inning to lift Washington past visiting Oakland, which had scored twice in the top of the inning.

Keibert Ruiz pulled the Nationals within 5–4 with an RBI single in the 10th. Lane Thomas walked and Meneses, a 30-year-old rookie off to a torrid start in the majors, hit a 2–2 pitch from Norge Ruiz (0–1) to right-center to give Washington the series win.

Oakland prospect Ken Waldichuk, 24, picked up a no-decision in his major league debut. Waldichuk was in trouble in each of the first three innings but allowed only one run on five hits in 4 2/3 innings.

Bradish (3–5) strung together his second straight sterling outing by striking out five and walking three.

The right-hander was coming off eight shutout innings last Friday at Houston. Cionel Perez and Felix Bautista each worked an inning in the combined two-hitter.