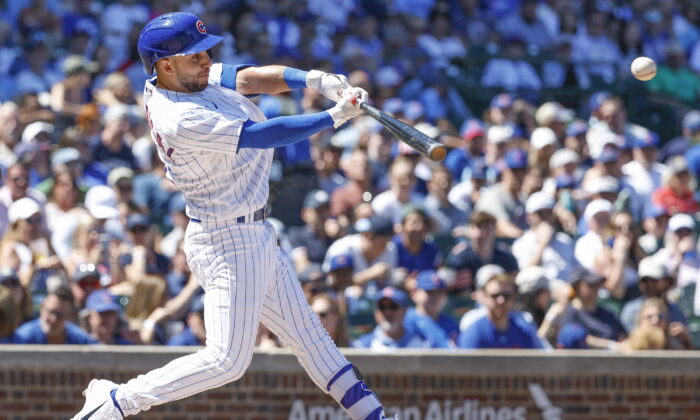 Nick Madrigal singled three times and drove in a run, and starter Drew Smyly tossed five shutout innings to lead the Chicago Cubs past the Cincinnati Reds 4–2 in the second annual Field of Dreams game in Dyersville, Iowa.

Smyly (5–6) struck out a season-high nine batters in working out of jams in each of the first three innings. Rowan Wick pitched the ninth inning for his seventh save in nine chances.

The Cubs, wearing early 1900s throwback outfits, rallied with two outs and nobody on in the first inning against Cincinnati starter and loser Nick Lodolo (3–4), who walked four and allowed all four runs over 4 2/3 innings.

The three-run uprising started when Lodolo hit Patrick Wisdom on the back foot with a breaking ball. Seiya Suzuki doubled to left-center field to score Wisdom for a 1–0 lead.

Cabrera (3–1) allowed just three hits and two walks, striking out six batters. Joey Wendle led the Marlins’ offense, going 2-for-4 with one triple and one RBI as the Marlins broke a two-game losing skid.

The Phillies, who loaded the bases with no outs in the ninth to no avail, had their seven-game win streak snapped.

Oscar Gonzalez drove in the go-ahead run with a two-out, 10th-inning single and visiting Cleveland stretched its winning streak to five games by downing Detroit.

Enyel De Los Santos (3–0) got two outs after Detroit scored two runs in the ninth and collected the win. Bryan Shaw notched his first save.

Javier Baez homered for the Tigers, while Willi Castro had three hits and scored a run.

The Tigers forced extra innings with two runs in the ninth but ultimately dropped their fourth straight contest.

Framber Valdez threw seven shutout innings to lead Houston to a win against visiting Texas in the rubber match of their three-game series.

Valdez (11–4) allowed four hits, struck out eight and walked one to match his major league career high in wins for a season.

He’s 3–0 with a 3.00 ERA in four starts since he was the winning pitcher for the American League in the All-Star Game on July 19.

Marcus Semien homered and Leody Taveras had two hits and an RBI for Texas.

After taking three of four from the Boston Red Sox in their prior series, it marked the first time since August 11-18, 2014 that the Royals have won back-to-back four-game series.

Greinke (4–7) scattered nine hits over 6 1/3 scoreless innings, often getting out of jams of his own doing. He didn’t walk a batter and struck out five.

The Rockies broke open a 2–2 game in the seventh and batted around against the St. Louis bullpen.

Lucas Gilbreath (1–0) pitched a scoreless inning of relief and Daniel Bard picked up his 24th save for the Rockies.

Paul Goldschmidt homered among his three hits and Nolan Gorman and Nolan Arenado also went deep for the Cardinals.

Daulton Varsho blasted a bases-clearing double during a seven-run seventh inning as Arizona stormed to a victory over Pittsburgh in Phoenix.

Emmanuel Rivera homered, doubled twice and had three RBIs for the D-backs, who took three of four from the Pirates and have won six of their last nine.

Kevin Ginkel (1–0) recorded two outs in the seventh inning for the win.

Trailing 3–2 in the seventh, Arizona sent 11 batters to the plate in the bottom half and scored seven runs against relievers Chase De Jong (4–1).

Yerry De Los Santos and Duane Underwood Jr. Ke’Bryan Hayes had two hits for Pittsburgh, which recorded four stolen bases but lost for the 12th time in its last 17 games.

Eric Hosmer ripped a go-ahead RBI double in the sixth inning to lift host Boston to a victory over Baltimore.

The win in the one-game “series” was Boston’s first in 13 sets (1–11–1) against American League East foes this season.

The one-off game was a result of the owners’ work stoppage before the season causing part of the schedule to be reshuffled.

Alex Verdugo and Tommy Pham each had an RBI double for the Red Sox, who had five doubles en route to snapping a four-game losing skid.

Terrin Vavra ripped a two-run triple and scored on Austin Hays’ RBI single for the Orioles, who lost for just the second time in their last nine games.