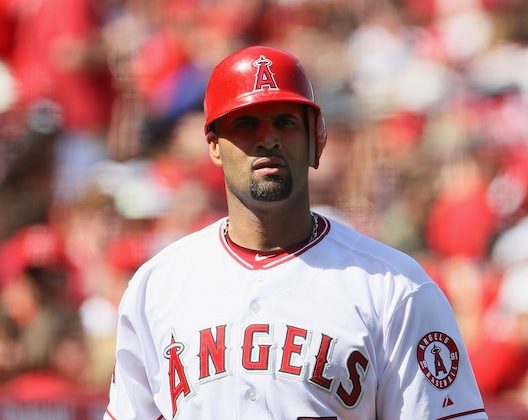 Albert Pujols is hitting just .217 though six games in 2012 for the 2-4 Angels. (Jeff Gross/Getty Images)
Baseball

With just over a week into the season it’s time to rank the 10 best teams in baseball, thus far.

9. Los Angeles Angels: 2-4 record; 5.0 runs scored, 5.0 runs allowed—With Thursday’s 10-9 loss to the Twins, the Angels have surprisingly lost four of five games against last year’s bottom-feeders Minnesota and Kansas City. Albert Pujols is hitting just .217 thus far while starting pitchers Dan Haren (6.97 ERA) and Ervin Santana (7.94 ERA) have started slowly as well. The good news is that DH Mark Trumbo, who missed all of last season with an injury, is hitting .300 through six games in 2012.

8. Cincinnati Reds: 3-4 record; 3.0 runs scored, 4.1 runs allowed—The Reds were officially “all-in” this season when they traded several top prospects to San Diego for perceived ace starter Mat Latos and gave first baseman Joey Votto an extension worth more than $200 million. While Votto is hitting at a nice early pace of .292 average/.379 on-base percentage/.500 slugging, Latos is a disappointing 0-1 with a 5.59 ERA after two starts.

7. Arizona Diamondbacks: 4-1 record*; 4.4 runs scored, 3.6 runs allowed—Arizona has walked a tightrope thus far, with success, winning three of their four one-run contests and winning another in extra innings. The close-game success is usually fickle though, especially as long as five lineup regulars are hitting .200 or worse. Still their pitching rotation, which was fortified by the offseason addition of former Athletic Trevor Cahill, is one of the best around.

6. Washington Nationals: 5-2 record; 4.0 runs scored, 2.4 runs allowed—Suddenly it seems conceivable that Washington, which hasn’t had a better than .500 season since they were the Montreal Expos in 2003, could be a contender. With a healthy Strasburg as their ace, followed by recent additions Gio Gonzalez and Edwin Jackson the Nationals have a rotation many would covet. If they can get some offensive production from their $126 million investment in Jayson Werth (who’s hitting .296) they might have something here.