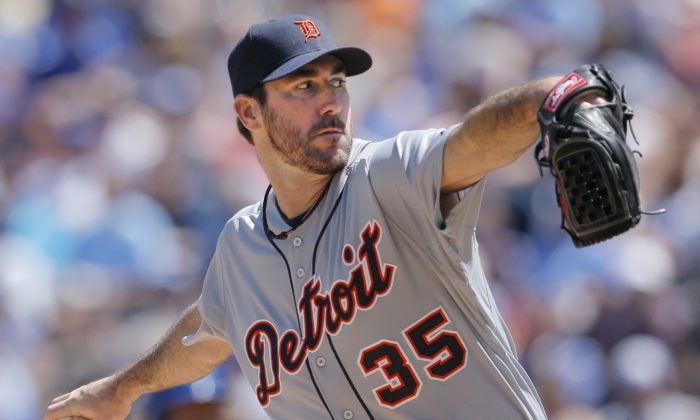 In this week, the Power Rankings continue to have a West feel. The top team features the best bat in the league. The strength of overcoming adversity in the rotation has made them a very strong team. Meanwhile, a pair of East teams are scraping to stand out among an average division.

This week, you could call the Detroit Tigers the road warriors. After losing the series at home against the Minnesota Twins, the Tigers went on the road through the American League East, who is not the strength they were expected to be mostly due to injuries. The Tigers made quick work of the Baltimore Orioles and Boston Red Sox. The Tigers outscored the Orioles 15-6 over a three-game sweep and the Boston Red Sox mustered just three runs to the Tigers 13 runs. Miguel Cabrera is becoming the powerhouse expected of him, hitting 10-for-22 (.455) over the week with three home runs and 12 runs batted in. Victor Martinez, batting behind Cabrera, hit 11-for-24 (.458) this week with two home runs and four runs batted in. This 1-2 punch in the heart of the order is making the Tigers a very strong team atop the Power Rankings.

The Tigers are a strong number one on the Power Rankings but the Oakland A’s may be 1A. When you outscore a team 30-6 over a three-game series, it makes it very tough to not put you on top of the Power Rankings. After finishing off a three-game sweep of the Washington Nationals, the A’s welcomed the Chicago White Sox with a series win too, outscoring them soundly, 18-8. Third baseman Josh Donaldson had a three-game home run streak this week. He hit .348 this week and had a hit in all but one game this week. He drove in 10 runs to help Jesse Chavez, Sonny Gray and Scott Kazmir in the rotation.

The Giants won two of their series this week against the Los Angles Dodgers and the struggling Atlanta Braves. The other series they had was a split of a four-game series with the Miami Marlins. Mike Morse started off the week cold, one hit in his first 13 at-bats but he hit two home runs at the end of the week. Hunter Pence has been helping offensively, but he will need help scoring by the bats around him. If Tim Hudson’s injury is serious, their place in the Power Rankings may start declining.

After finishing successfully winning a series with the visiting New York Yankees, the Milwaukee Brewers also won their series with the visiting Pittsburgh Pirates. The revival of closer Francisco Rodriguez saw its first bumps in the road. He blew his first save against the Yankees and got his first loss against the Pirates when he allowed three runs. Ryan Braun recently returned to the team while Carlos Gomez served out his suspension for the altercation in Pittsburgh. The Brewers could get back on the right track to making some ground between them and the Cardinals with a strong series on the road to Atlanta and Miami.

Even the most potent offense cannot win every game without pitching. The Colorado Rockies learned that this week. After winning soundly against the Cincinnati Reds to open the week, the Rockies ran into Homer Bailey and the Royals’ James Shields and Jason Vargas. All three pitchers helped keep the Rockies to just four runs over three games in losing efforts. The Rockies would return home and won two out of three against the San Diego Padres with their usual overpowering offense. It is hard to call a .393 batting average a cold spell but Troy Tulowitzki had his league-best batting average dip under .400 this week. They still are a force to be reckoned with but they will still need to add some quality pitching to be a threat for any competitive success in the league.

The Angels won three out of four games at Toronto before going to Philadelphia and sweeping the Phillies. The Rays came to visit the Angels and they won two of the first three games in the series. The Angels got the first walk-off home run of Mike Trout’s career but Albert Pujols hit a slump in this week, four hits over the seven games. While Pujols struggled, Erick Aybar got hot, contributing hits five of the seven games. The Angels’ emerging star pitcher is Garrett Richards. He threw seven scoreless to the Philadelphia Phillies. With Richards and Wilson, Jered Weaver can help make this team a very viable threat for the West if they can get it all going in the right direction.

The New York Yankees countered their four-game losing streak with a four-game winning streak that featured some great pitching. The offense was alive in the four-game losing streak but some less than stellar pitching made the runs too much to overcome. Back-to-back shutout to end the Subway Series is a good way to return home and they took the first game of the Pittsburgh Pirates series with one run allowed. The pitching of Masahiro Tanaka and the bat of Mark Teixeira are providing a majority of the success at their respective positions. The Yankees rotation is patched together and is barely holding on but if they can endure the next month or two, the rotation will start to resemble their expectations.

The Braves lost two series this week against the San Francisco Giants and the St. Louis Cardinals despite sweeping the Chicago Cubs. The offense of the Braves continues to struggle as a whole. Pitchers like Aaron Harang and Julio Teheran took some bumps in their starts this week while Freddie Freeman remains the lone batter on the Braves with a batting average above .300. Jason Heyward and B.J. Upton are threatening the Mendoza line while Dan Uggla is well below it. If these three bats don’t contribute consistently, the Braves hold on the National League East will be lost.

The Baltimore Orioles ran into the hottest team in the American League when they got swept by the Detroit Tigers but they bounced back with some wins against the struggling Kansas City Royals. The Orioles have come close to following expectations despite taking a loss in the lineup with Matt Wieters possibly lost for the season. Nick Markakis and Adam Jones are having great offensive seasons but the team leader is Nelson Cruz. The 12 home runs by Nelson Cruz put him in the top three of the league. Chris Tillman is leading the team on the pitching and on the  backend, Tommy Hunter appears to have his closer title on the line while relievers Darren O’Day and Zach Britton post sub-1.00 ERA and could be in line to take the job from Hunter.

The Cardinals began the week by escaping Pittsburgh with one win in the three-game series with the Pirates. The returned home to win two out of three games with the Chicago Cubs and won their series with the Atlanta Braves. The Cardinals’ offense has begun showing flashes of what they once had, production up and down the order. Allen Craig, Yadier Molina and Matt Holliday are the center of the Cardinals’ offense and they have all begun to hit for the potent starting pitching. Shelby Miller and Lance Lynn join Adam Wainwright to make a dominant trio to be feared. The one notable problem in the Cardinals is the closer, Trevor Rosenthal. He is sporting an ERA approaching 5.00 and also has two losses. If the young fireballer can get things back on track, the Cardinals will quickly move off the borderline in the Power Rankings.