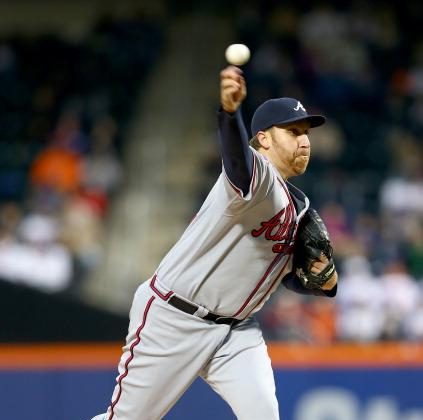 Throughout the 2014 regular season, some teams will shine and some will falter. Power Rankings will identify who has been moving upwards and who may be hitting a cold spell.
In this week, some stellar pitching from a team thought to be struggling with injuries in the pitching staff moved them to the top of the mountain. A team with high expectations from a heavy-hitting first baseman and a rookie put in a big role quick helped them live up to the lofty expectations.

The Atlanta Braves bring the second best record in the league. The Braves found themselves in a week of division matchups. Carrying over from last week, the Braves would complete a sweep of the Washington Nationals. A big contributor to their winning ways this week was Aaron Harang. After six innings of one-run baseball against the visiting Nationals, the veteran right-hander went seven no-hit innings when visiting the New York Mets. Julio Teheran was the winner in an amazing duel with Cliff Lee in Philadelphia and Alex Wood put up similar numbers in a losing effort. They both competed in 1-0 games. Freddie Freeman hit a couple home runs during this week as the Braves move to the top of the Power Rankings.

Winning six out of seven games in a week can do wonders for a team. Winning three series, including three out of four against the Seattle Mariners will help separate you from others in your division. Over 17 innings in two starts, Martin Perez had as good a week as any starting pitcher can have. He went eight scoreless against the Houston Astros in a 1-0 win and he followed that with a complete game shutout of the Chicago White Sox in a dominant 12-0 win. The Texas Rangers got to see the first of what they hope to be many home runs by Prince Fielder. Kevin Kouzmanoff filled in for Adrian Beltre with some home runs of his own and outfielder Leonys Martin contributes a complete offense with extra base hits, not just home runs. They are not leading their division but the Oakland Athletics may need to watch out for the hot Rangers.

Like the Texas Rangers, the Oakland Athletics won all three series connected to this week. They were all against division opponents but the Houston Astros are struggling to score recently. The A’s had to go to two extra inning games with the Los Angeles Angels, splitting two of them but ultimately taking the majority of the series. Yoenis Cespedes and Josh Donaldson regularly contributed to the Oakland offense. Scott Kazmir continues to have a great season with Oakland, having a scoreless start when they visited the Seattle Mariners.

The Cardinals did put together a three-game win streak but speaking of win streaks, the Cardinals snapped the Milwaukee Brewers win streak on seven scoreless innings by Lance Lynn. Jhonny Peralta provided power on a couple instances and the Cardinals continued to turn to their strong rotation, led by Adam Wainwright.

The Kansas City Royals bounced back from a very difficult week. In this week, they finished a tough series visiting the Minnesota Twins by getting swept. They took advantage of their visit against the Houston Astros on the bat of catcher Salvador Perez and Omar Infante. Rookie Yordano Ventura got his first major league win and veteran Jason Vargas helps as a leader by example with seven scoreless innings with the Minnesota Twins coming into town.

Always near the top of the lineup, Melky Cabrera has been a contributor to help the Blue Jays to two wins during their visit to the Cleveland Indians. Despite losing the series when visiting the Minnesota Twins, Jose Bautista helped make the spacious Target Field look small. The shocking starter of the season so far is Mark Buehrle who threw seven scoreless innings in a shutout win over the Minnesota Twins. The Blue Jays are maintaining a place in the race for the AL East but it is a marathon not a sprint. But for now, the Blue Jays are a strong team in the league.

Would anyone expect the San Diego Padres to take two out of three with the visiting Detroit Tigers? Probably not but baseball is fun like that. The Padres kept their opponents to just 15 runs over a seven-game week. The Padres made their games close, whether they won or loss. The Padres saw offensive contributions ranging from Everth Cabrera to Xavier Nady. It’s difficult to imagine the Padres can continue moving forward but at a .500 record, there’s still time to go up or down.

The Dodgers would ride the hot bat of Adrian Gonzalez through this week. Despite losing two out of three to the San Francisco Giants; the Dodgers would win the ones they should win. The Arizona Diamondbacks have been struggling on a regular basis. The Dodgers entered the week sweeping the lowly Diamondbacks and they would end the week looking to get another series win over the Diamondbacks who came to visit in Chavez Ravine.

The Brewers possess the best record in the league but the road through the regular season of Week 3 was a rough one. After Kyle Lohse helped the Brewers to their seventh consecutive win, the Cardinals came into town and showed the Brewers why they are the 2013 National League champions. Despite losing two out of three at home to the visiting Cardinals, the Brewers bounced back when they returned to the road against the Pittsburgh Pirates. They would exit the week on a two-game winning streak on the bats of Jonathan Lucroy and Ryan Braun.

For a team not known for their pitching; the Colorado Rockies split a four-game series with the San Diego Padres but their wins featured a very limiting pitching staff. The pitching staff allowed just three runs over the two wins. Then the Philadelphia Phillies came to visit the Rockies and the pitching staff continued to be stellar, allowing one run in each of the first two games. Hard to explain why the Rockies did better against the Phillies compared to the Padres but baseball can be unpredictable at times. The Rockies unpredictably are contending and if bats like Wilin Rosario continue contributing, they could be a contender for a while.