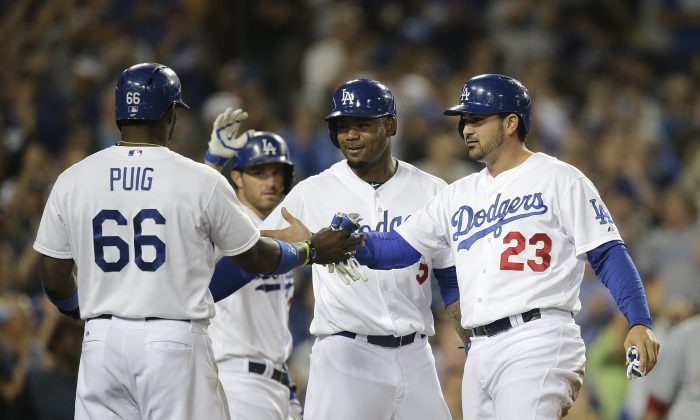 Los Angeles Dodgers' Yasiel Puig, Carl Crawford and Adrian Gonzalez, from left, celebrate after they scored on a triple hit Andre Ethier during the fourth inning of a baseball game against the Cincinnati Reds on Tuesday, May 27, 2014, in Los Angeles. (AP Photo/Jae C. Hong)
News

In this week, one team continues to maintain their place in the rankings while the shuffle goes on. Some teams that once had a secure hold on their spot have begun to dip down the rankings. Other teams continue to stay within a range of the rankings still intent to move up.

The first 50-game winning team gets the top rank on the Power Rankings. The Oakland Athletics would win three out of their five games this week. The A’s have a habit of losing by a sizable margin but they also find a way to respond in similar fashion over multiple games. This is the explanation for their video game-like run differential. Everything is clicking for the Oakland A’s whether it be their rotation or their offense or their closer with a strikeout-to-walk ratio that is out of this world. The A’s may be full of a number of players you didn’t expect to be a force, but expect it, because they may be here to stay for the season and then some.

Everything is starting to click for the Los Angeles Dodgers. Despite a prolonged injury to Hanley Ramirez that may ultimately land the Dodgers’ shortstop on the disabled list, the Dodgers have won five of the seven games in the week. The big three of the Dodgers’ rotation has been a force as Kershaw leads Greinke and Ryu while occasional effectiveness by Haren and surprising effectiveness by Beckett have put them in a tie with the San Francisco Giants for the National League West. This was once a division where the Giants had a nine-lead over the Dodgers.

The Milwaukee Brewers continue to make a strong showing in this regular season. After completing a sweep of the Colorado Rockies, the Brew crew would lose two out of three to the Washington Nationals before finishing the week on a four-game winning streak. The division is getting a little tighter for everyone else that is not the Brewers. The team with the best record in the National League seems to pull all the right triggers, getting contributions for players up and down the lineup. Players like Rickie Weeks have found their place in spot starts behind Scooter Gennett while veterans like Lyle Overbay and Aramis Ramirez find the right time to get the big hit needed.

The month of June has not been kind to the San Francisco Giants. After two bad weeks through the middle of June, the Giants would lose five of seven games. The Giants lost two out of three to the San Diego Padres and would follow that series with three straight losses to the Cincinnati Reds. Even the second Tim Lincecum no-hitter of the San Diego Padres in under a year is enough to keep the Giants in the top two of the Power Rankings.

Winning six straight games into this week is the way to move up the Power Rankings and to a good lead on the first Wild Card spot. The Angels won five out of six in the week The Angels’ lineup is now at full strength with Josh Hamilton and Albert Pujols healthy while Mike Trout is arguably the best player in the game right now. In this week, the Angels looked to fix their biggest flaw on the team, the bullpen. The Los Angeles Angels traded closers with the Pittsburgh Pirates as they acquired Jason Grilli for Ernesto Frieri. Time will tell if the new locations for the pair of struggling relievers will turn their respective seasons around.

Despite losing two starters in one week, the St. Louis Cardinals managed to win four out of seven in the week. The division is currently out of reach but the second Wild Card spot is the Cardinals’ to lose. Consistency by the expected members of the rotation can make up for the replacements until the injured pitchers can return. The offense has begun to show hints of last year but until it can be a bit more consistent, the Milwaukee Brewers and the division will still be out of reach.

After briefly losing the division lead to the Kansas City Royals, the Detroit Tigers reclaimed it and in a sizable way. Winning four out of five in the week while the Kansas City Royals lost seven in the past two weeks creates the lead a division leader would find comfortable. While Justin Verlander and Max Scherzer begin to show the form that made them dominant pitchers, another pitcher is emerging as a dominant threat. Pitcher Rick Porcello leads the team as the lone 10-game winner and unlike Scherzer and Verlander; Rick Porcello will not put up double digit strikeout numbers but what he will do is generate a lot of ground outs.

The powerhouse offense of the Blue Jays was not enough during most of this week. They would finish off their series with the Cincinnati Reds on a losing effort and they would end the week losing two out of the first three in a four-game series with the Chicago White Sox. Yet the Toronto Blue Jays still have a sizable lead over the other struggling East teams. Amidst the series loss and the potential series split, the Blue Jays had a three-game series with a division opponent, the New York Yankees. Taking two out of three with a division opponent will put some distance in the division.

The Atlanta Braves are breathing on the neck of the Washington Nationals in the East. After getting a brief hold on the lead, the Nationals would win four out of seven and maintain the same record as the Braves. So why do the Nationals finish just one spot above the Braves, who had held onto the division lead for a considerable amount of time? The Nationals made up the ground and they are also finding themselves stronger as a vital healthy body, Bryce Harper, returns. An excess of good bats is a good thing to have.

If you give them the room to come back in, the Atlanta Braves will make the race for the National League East interesting. The recent cold spell pulled the Washington Nationals ahead of the Braves but a hot streak has given them the same records, tightening the race in the division. The Braves won four out of six as it appears they are starting to heat up again just when the pressure starts on them.

Ryan Nakada
Follow
Yankees fan for most of my life. Has always had a love for baseball, whether it be playing it, watching it, reading about it, or writing about it. Tweet me: @adakannayr