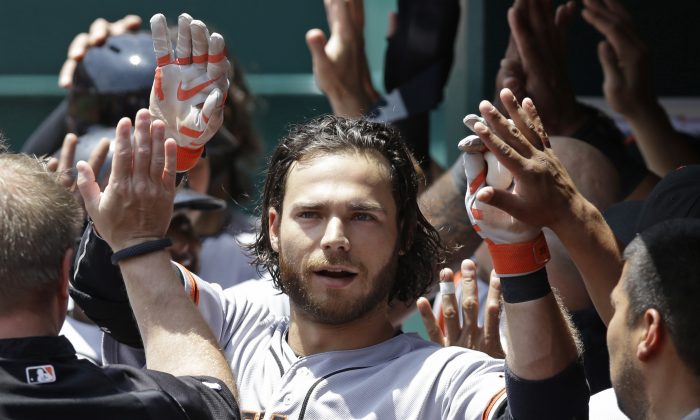 1.San Francisco Giants
It’s hard to find a flaw in the team with the best record in the league. As it has been identified time and time again, offseason acquisitions of Mike Morse and Tim Hudson have paid off immediately. Mike Morse leads the team in home runs and runs batted in while Tim Hudson is near the best in the league with an ERA below 2.00. Closer Sergio Romo already has 19 saves on the season. Madison Bumgarner has an ERA under 3.00 while Matt Cain and Tim Lincecum look to get everything sorted out. The Giants don’t have much competition to this point in the season, winning all but one game during this, the first week of June.

2. Oakland Athletics
The team with the best run differential sits as second best team in the league. The Oakland Athletics started this week on a five-game winning streak but lost a one-run game in the finale at New York to snap the streak. The A’s would win the first of a three-game series in Baltimore but it wasn’t without some fireworks. Things got heated between third basemans Manny Machado of the Orioles and Josh Donaldson of the A’s after a tag by Donaldson upset Machado. The A’s also benefited from some highly questionable decisions by the Orioles to end the game. As if the A’s didn’t need easy wins, the Orioles gave them one. The high-powered offense, featuring bats like Brandon Moss and effective pitching of Scott Kazmir and company, the A’s are listed as second but one could easily be in their future.

3. Toronto Blue Jays
The Toronto Blue Jays continue to have a sizable lead over the rest of the broken down and beatened AL East. A sweep of the Detroit Tigers is very impressive despite the struggles of Tigers’ closer Joe Nathan and starter Justin Verlander. R.A. Dickey has been effective, Mark Buehrle leads the league with 10 wins and rookie Marcus Stroman is living up to the lofty expectations of him. The offense is producing runs up and down from Melky Cabrera’s resurgence to the potent one-two punch of Jose Bautista and Edwin Encarnacion. If the Blue Jays potent offense and pitching can stay healthy, the 2013 expectations are being fulfilled a year late.

4. Milwaukee Brewers
After completing a series win against the Chicago Cubs, the Brewers would split the four-game series with the Minnesota Twins. The Brewers would split the first two of three games with the Pittsburgh Pirates to finish the week. Jonathan Lucroy was a presence throughout the week as he looks to be a member of the National League team at this year’s All-Star Game. The Brewers also got third baseman Aramis Ramirez back. Francisco Rodriguez continues to save games while the starting rotation holds strong with Kyle Lohse, Wily Peralta and others. Carlos Gomez and Ryan Braun are still being productive as the Brewers stay atop the NL Central and try to keep the 2013 National League champion St. Louis Cardinals away from them.

5. Detroit Tigers
Good for the Detroit Tigers that they had a substantial lead in the AL Central. One of the biggest strengths for the Tigers, their starting pitching, has been floundering of late. After a third difficult start for Max Scherzer, the Tigers ran into the second strongest team in the American League, the Toronto Blue Jays. The pitcher with the best record for the Tigers, Rick Porcello (8-2) would lose to R.A. Dickey and Justin Verlander would lose to J.A. Happ as Verlander begins to approach a .500 record. The Tigers will exceed their stolen base total from last year by leaps and bounds and the middle of the lineup is not missing Prince Fielder with the likes of Victor Martinez behind Miguel Cabrera but the pitching, both starting and relieving, need to find some consistency to move back up as the second best team in the American League.

6. St. Louis Cardinals
The Cardinals finished up their series with the best team in the league, the San Francisco Giants, before starting their four-game in-state rivalry with the Kansas City Royals in interleague play. The Royals have been struggling mightily this season but the Royals would take three of the four games to take the season series. The National League champions luck would continue to go against them as they continued an interleague portion of their series up north against the hot Toronto Blue Jays. After losing the first game of the series; the Cardinals would win the second on a complete game, shutout by Shelby Miller. Closer Trevor Rosenthal is still having his struggles occasionally. The Cardinals still have a chance at getting the Central crown from the Brewers but they need to find more consistency.

7. Los Angeles Angels
This week saw the return of Josh Hamilton from the disabled list after injuring his finger in early April. He would hit a home run in his first game back but they would lose the game and the series to the Houston Astros. Despite losing the series to the Astros, the Angels would bounce back and win the first two of the three-game series with the Chicago White Sox. The returns of outfielders Josh Hamilton and Kole Calhoun will help Mike Trout, Erick Aybar and Albert Pujols in fortifying the offense. The A’s have put a sizable difference between themselves and the rest of the league but if the Angels can get off to a hot streak, the Wild Card is within reach and with time, even the West could be in their sights. It is no easy task but no one ever said the baseball season would be.

8. Seattle Mariners
This week, the Seattle Mariners benefited from playing some teams that were not on the path upward on the standings. Rookie Roenis Elias shut down the Tigers and outdueled Max Scherzer to start the week. On their way to Atlanta, the Mariners would need to make a slight detour to take on the New York Yankees for one game. The Mariners would just so happen to have their ace and perennial Yankee killer, Felix Hernandez on the mound for the makeup game. The Mariners would defeat the Yankees soundly and also made quick work of the Atlanta Braves in a two-game series sweep. The Mariners would go on to split the first two of four games with the surprisingly last place team, the Tampa Bay Rays. The Mariners are benefiting from the strength of a weak schedule and are winning the majority of them. With the Texas Rangers struggling to find healthy bodies, the AL West is a three-team race and the Mariners, led by Felix Hernandez and batting leader, Robinson Cano, are still in the race with a chase after the Angels and A’s.

9. Atlanta Braves
The struggles on offense for the Atlanta Braves is continuing to be a theme. Much like last season, the Braves continue to count on first baseman Freddie Freeman but there is very few others the Braves can depend on. Justin Upton has had flashes of hot streaks and Jason Heyward and Evan Gattis are starting to show some life. The other Upton continues to try and stay off of the Mendoza line. Starters Aaron Harang and Ervin Santana have returned to reality while Julio Teheran continues to show the Braves spent their money wisely. Craig Kimbrel continues to be one of the best closers in the game but he has shown some instances of erratic control. If the Braves aren’t careful, the Washington Nationals and Miami Marlins will be on their backs before they know it.

10. Miami Marlins
After losing the opener, the Miami Marlins competed in their local rivalry with the Tampa Bay Rays. In a series of four games, two on the road and two at home, the Marlins would make a clean sweep. The Marlins’ rotation has picked each other up in the absence of ace Jose Fernandez. Henderson Alvarez continues to shine while the bats of Marcell Ozuna and Giancarlo Stanton have powered the Marlins right into contention for the NL East crown. The Marlins would lose two of the first three games in the series at Chicago but the Marlins are surprisingly strong in the race for the East.