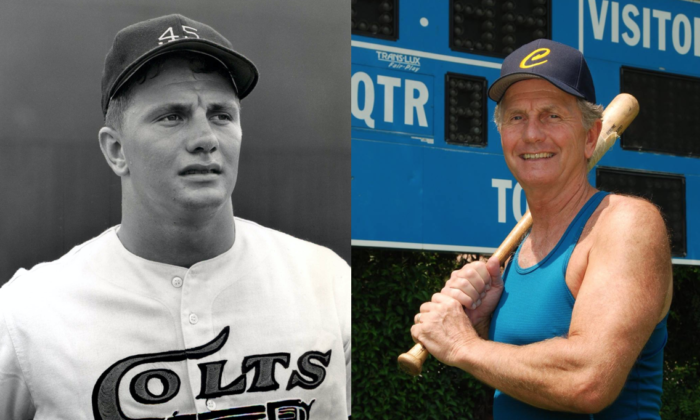 The phrase “batting a thousand” is more of a concept, not a reality. It’s about striving for perfection, knowing true perfection is virtually impossible.

Unless your name is John Paciorek.

Paciorek is listed in the Major League Baseball record books as having a “perfect” batting average of 1.000. There are 27 players in baseball history who have had a major league “career” with a 1.000 batting average, but only one—Paciorek—actually had more than two at-bats.

Paciorek had three at-bats, getting a hit each time, in a remarkable game played on Sept. 29, 1963. Paciorek, just 18 years old at the time, was called up from the minor leagues to play for the Houston Colt .45s in the final game of the regular season.

It was a chance for the baseball club and manager Harry Craft to get a look at Paciorek and some of the organization’s other young players. The game was otherwise meaningless, the Colt .45s long since eliminated from the National League pennant chase.

Paciorek was not among them, even though it was he who stood out that one day in front of a small crowd of 3,899 fans.

Paciorek reached base five times, going 3-for-3 with two walks. He also had three runs batted in, scored four runs, and had two nice running catches in the outfield in the Colt .45s’ 13-4 victory.

But it wasn’t the beginning of Paciorek’s major league career, it was the end. He played that day with a bad back that required surgery in the off-season, and he was never the same afterward.

He toiled in the minor leagues for the next six years, dealing with a variety of injuries that he said were the result of the back surgery he never should have undergone.

The procedure involved spinal fusion surgery, which Paciorek said was not a good idea considering he was still growing. And of course, the medical technology of such a surgery in 1964 wasn’t nearly what it is today.

It was two years before he could play again, and even once he was back on the field, he never was able to avoid an ever-growing list of physical ailments.

He was ultimately released by the Colt .45s, then by the Indians, and finally decided in 1969 at age 24 that he had to find another line of work.

For that one day, though, Paciorek, whose two younger brothers Tom (18 years) and Jim (one year) played in the majors, was on top of the world.

“I didn’t feel any pain that day,” said Paciorek, who developed torn muscles in his upper back that season. “I ran well, I felt comfortable at the plate. I was going to dig in there no matter what.”

Paciorek stood 6-foot-2 and weighed 200 pounds in those days, and he didn’t lack for confidence. He sulked when, after an impressive spring training that year, he was sent to the minors to play every day and gain experience rather than sit the bench in the majors.

He ultimately got his chance in the majors, albeit short-lived. And like anyone would have, Paciorek was left to wonder “what if?”

Paciorek also was a workout fanatic, which may have led to his back injury.

“I’d do neck exercises where I’d do a handstand leaning against a wall and hold myself up with only my head, no hands,” he said. “I incapacitated myself a couple times. I had a 19 1/2-inch neck and I wanted it bigger, I wanted to look like a football player.”

He developed torn muscles in his upper back and eventually began experiencing lower back pain as well, because he was sitting on the bench so much during his rehab in the minors.

Once he finally was able to return to the field, the pain affected his swing, and he struggled, but he still got the call for that one memorable game in the big leagues.

This isn’t the end of the story, though. In fact, it’s the beginning.

His baseball career over, Paciorek decided to go back to school. His dad made sure Paciorek’s pro baseball contract with the Colt .45s included paying for college if and when he decided to go. So he did, attending the University of Houston and graduating with a degree in Physical Education.

Once he finished college, Paciorek worked in Houston at a Jewish community center for eight years, in charge of all sports activities, despite not being Jewish.

So Paciorek left Houston and headed to California to work at Clairbourn, a nursery through 8th grade private Christian school in San Gabriel, a small town 10 miles east of Los Angeles.

Paciorek, now 77 and the father of eight and grandfather of 15, taught at Clairbourn for 41 years, starting in 1976 before retiring in 2017. He taught physical education for the entire school and also coached some of the school’s athletic teams.

“I put my heart and soul into teaching, and teaching and coaching kids in a kindly way,” Paciorek said. “When I was growing up, coaches were so mean. I don’t think they wanted to be mean, I think they thought that was the way they were supposed to be. I had to be somewhat tough, but I didn’t want to be mean.”

And it didn’t hurt that all of Paciorek’s children were able to attend Clairbourn.

“It’s an expensive school, but I got great discounts,” he said. “And that kept me there, for that reason.”

Paciorek says he wasn’t just a teacher at Clairbourn, but a student as well.

“Let me tell you about the education I got, from the great administrators, who insisted all teachers were advancing technologically,” he said. “That really contributed to my ability to write, having and learning how to use a computer.”

Though Paciorek left baseball many years ago, the game has always been a part of him. He has studied the art of hitting relentlessly, watching old videotapes and breaking down the mechanics of a swing.

He compiled so much information, he has written numerous essays and two books on the mechanics of hitting and throwing, thanks to his Clairbourn education.

The two books are titled “Plato & Socrates: Baseball’s Wisest Fans” and “The Principle of Baseball: And All There is to Know About Hitting.”

He also has written a book that is “semi-autobiography / semi-fictional” called, “If I Knew Then What I Know Now.”

He calls Barry Bonds the greatest hitter of all time, because he says Bonds’ mechanics are flawless.

“Barry Bonds is the perfect guy to watch,” Paciorek said. “If you watch his back knee, it’s in the same position the whole time. He’s not lunging or moving forward. His head is perfectly still. The only thing that prevented him from hitting .400 with 100 home runs every year is pitchers not pitching to him.’’

Bonds’ career batting average was .298, which is good, but not quite a thousand.