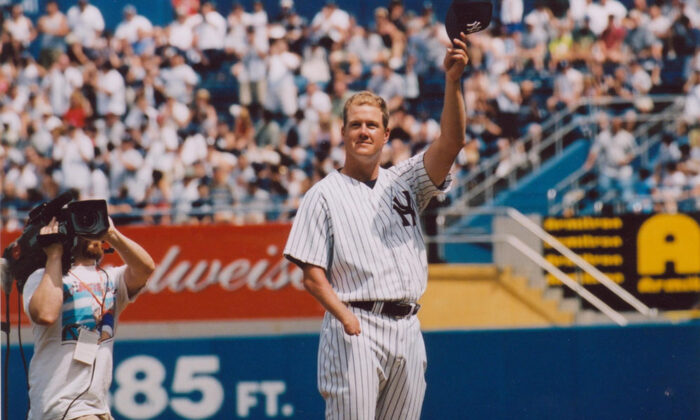 It’s one thing for those with physical challenges to be told, “You can do it,” and quite another to have a living, breathing example of achievement standing before you, showing you that anything is possible.

Jim Abbott has been—and continues to be—that living, breathing example to many who otherwise might have not have believed they could overcome any obstacle that life threw at them.

Ironically, “throwing” is exactly what Abbott became quite proficient in—proficient enough to pitch in the major leagues for 10 seasons.

Abbott, now 54, was born in 1967 in Flint, Michigan, missing his right hand, his arm extending to just past his elbow. But he became a standout pitcher on the baseball team and the quarterback on the football team in high school.

He went on to the University of Michigan, where he won several awards, including the Golden Spikes award, which recognizes the best amateur baseball player in the country, and the Big 10 Player of the Year award.

He also won the Sullivan Award, which recognizes the best amateur athlete in the country, regardless of sport.

He pitched the United States to victory in the gold medal game of the 1988 Olympics in Seoul, South Korea, was a first-round draft pick of the California Angels, and skipped the minor leagues completely, becoming a major leaguer with the Angels at age 21 in 1989.

And his crowning moment was throwing a no-hitter in Yankee Stadium while pitching for the Yankees in 1993. He finished his major league career in 1999.

Inspiring, yes. But Abbott’s journey has been filled with ups and downs, victory and heartbreak, and it continues today, as Abbott works as a motivational speaker to send a message of possibility to those who might need to see it to believe it.

“I don’t have a particular target audience,” said Abbott, who now lives in the South Orange County town of Corona del Mar, California. “I do Zoom calls with third graders, I’ve spoken to 4,000 people in an arena. I just try to convey a message of possibility. If you look at my life, from the beginning, starting off in Flint, Michigan, my parents sacrificed a lot for me, it wasn’t a path that could have been predicted.

“I don’t try to beat people over the head with a particular message. I just try to tell my story of growing up, of support, of optimism, of people who were there for me, of mentorship. And then I walk through playing in the Olympics, of winning a gold medal, some of the struggle of my childhood, and I finish up with the no-hitter at Yankee Stadium and the upbeat moment of that and how it sort of incapsulated my career. And maybe how a lot of kids can receive the message of not just participating but of doing well and succeeding. Improbability turning to great possibility.”

In a way, his career as a speaker came long before the scheduled engagements he has now. As a player with the Angels, he would often be introduced to children with a wide range of disabilities, including those who might have been born with a particular affliction, or maybe a child who lost a limb in a farming accident.

Tim Mead, then the Angels director of media relations, would set up the meetings, which often would take place on the baseball field an hour or two before the game.

Abbott would engage with the child, offering words of support and encouragement. Now, many years later, Abbott said his home office is “like a post office,” covered in letters and notes, some of which thank him for how he inspired them or helped their parents.

“I hear from young kids and families, parents who are just coming into the same circumstances that my parents came into years ago,” Abbott said. “I’ve heard from basketball players, MMA fighters, people who’ve grown up to be motorcycle racers and all these wide-ranging pursuits. And that’s a big part of my message now when I speak, telling how gratifying those meetings were, deeply felt meetings with families who were dealing with the same uncertainty my parents were feeling. … To see those kids doing great, I just love it.”

For all the success Abbott had as a player, he also had difficult times. His pitching record of 2-18 in 1996 was the worst in the majors, and in spring training of 1997, still only 29 years old, the Angels released him from the team.

He remembers driving home from the Angels’ spring training complex in Tempe, Arizona to Orange County in tears, trying to make sense of what happened.

But after sitting out the 1997 season, Abbott returned in 1998 to play for the Chicago White Sox, and for the Milwaukee Brewers in 1999, before retiring from baseball—for good this time—at age 31 after the 1999 season.

“I felt I let a lot of people down,” Abbott said of his effort to return in 1998. “And it took time to try to sort that out. I realized that I hadn’t brought any sort of closure to it, I was missing it desperately, and we’re all hopeful we’re going to find the answer around the next corner or under the next rock.

“So I felt like I owed it to myself to try. And maybe a change of circumstances would allow me to keep doing the thing I loved to do most. I’m glad I went through that. I saw baseball in an entirely different way, went to the minor leagues for the first time, and I got to see the dream.”

Abbott is still living the dream in Corona del Mar with his wife Dana, who was a standout basketball player in high school and college, and his daughters Maddy and Ella, both of whom went to Abbott’s alma mater at Michigan. Maddy was a volleyball player and Ella a water polo player.

And his career as a speaker? Not something he planned on, but something for which he’s grateful.

“I left baseball a little bit sooner than I wanted to,” he said. “I was in my early 30s and I was really trying to come to terms to the career that I had. There were so many great moments, there was so much to be proud of, but at the same time I struggled mightily at the end of my career, so there was some sadness to it as well.

“So I really struggled to figure out how it played out in the end. Some people approached me about speaking and sharing my story, and it ended up being a great way to look back and try to make sense of experiences and places that I played and people that I played with and for. So in that way, it was very beneficial for me personally.”

In a career full of awe-inspiring moments, there is one that stands out above the rest. Not just for the moment it happened, but for the enduring message it sent—the no-hitter at Yankee Stadium.

“I didn’t just want to be the guy who played; one-handed pitcher, one-armed pitcher, I think we all want to move past those labels,” he said. “I wanted to be good, and I felt like that was a message that maybe the no-hitter helped to send. I know it was just one game, there’s luck, you can’t attach too much meaning, I get it. But to a lot of people it was a really positive thing, and I’m very proud of it for that reason alone.”