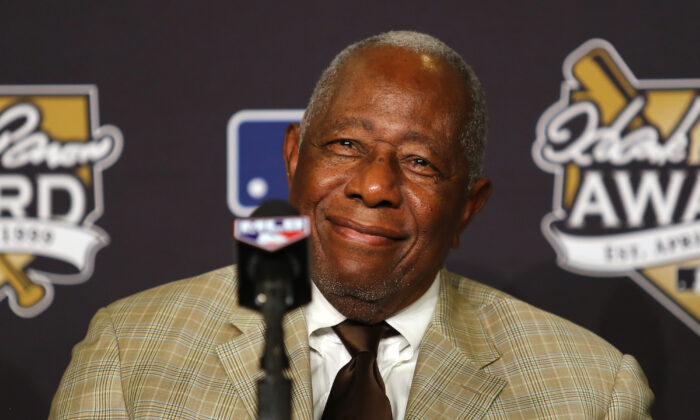 The Atlanta Braves, a team Aaron spent 21 seasons with, said that the MLB legend died peacefully in his sleep.

Aaron made his last public appearance on Jan. 5, when he received the first of two doses of Moderna COVID-19 vaccine at the Morehouse School of Medicine health clinic in Atlanta alongside his wife, Billye, former UN Ambassador Andrew Young, and former Health Secretary Louis Sullivan. He said he wanted to send a message to the black community that the vaccine was safe.

“I don’t have any qualms about it at all, you know,” Aaron told The Associated Press. “I feel quite proud of myself for doing something like this … It’s just a small thing that can help zillions of people in this country.”

“Our family is heartbroken to hear the news of Hank Aaron’s passing,” Georgia Gov. Brian Kemp said in a statement on behalf of the Aaron family. “Hank Aaron was an American icon and one of Georgia’s greatest legends. His life and career made history, and his influence was felt not only in the world of sports, but far beyond—through his important work to advance civil rights and create a more equal, just society.”

“We ask all Georgians to join us in praying for his fans, family, and loved ones as we remember Hammerin’ Hank’s incredible legacy,” Kemp said.

Aaron was enshrined in the Baseball Hall of Fame in 1982, with 97.8 percent approval in his first year on the ballot. In 1999, which marked the 25th anniversary of Aaron breaking Babe Ruth’s all-time home run record, MLB introduced the annual Hank Aaron Award, given to the best overall offensive performer in the American League and National League.

“Hank Aaron is near the top of everyone’s list of all-time great players,” MLB commissioner Rob Manfred said in a statement. “His monumental achievements as a player were surpassed only by his dignity and integrity as a person. Hank symbolized the very best of our game, and his all-around excellence provided Americans and fans across the world with an example to which to aspire. His career demonstrates that a person who goes to work with humility every day can hammer his way into history—and find a way to shine like no other.”