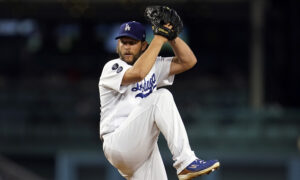 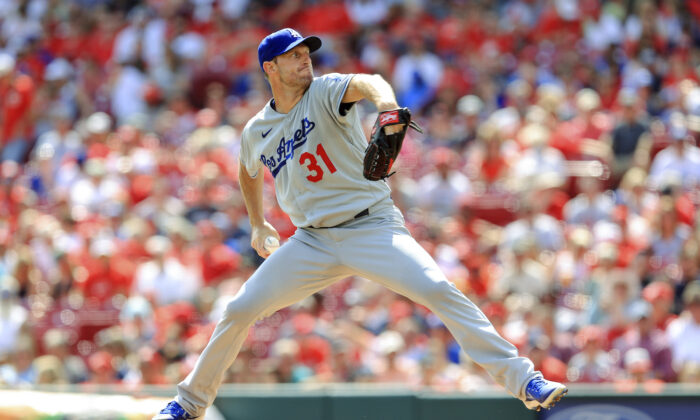 CINCINNATI—Max Scherzer pitched seven shutout innings in another dominant performance for the Los Angeles Dodgers, who kept up their push in the NL West with a 5-1 victory over the Cincinnati Reds on Saturday.

Scherzer (15-4) improved to 7-0 in nine starts since being traded from Washington to the Dodgers on July 30. He allowed just two hits, struck out seven and lowered his MLB-best ERA to 2.08.

It was another tough loss for the Reds, who came in one game behind St. Louis for the second NL wild-card spot. Cincinnati will try Sunday to avoid losing its eighth straight series.

“I had a good feel for my curveball today,” Scherzer said. “I was able to throw it low in the zone. If I can get that going, that allows my fastball to play. That allows Barnesy (catcher Austin Barnes) to get more creative back there.”

The three-time Cy Young Award winner has an 0.78 ERA in his starts for the Dodgers.

Just about the only thing Scherzer hasn’t done for the Dodgers is deliver at the plate. A good-hitting pitcher for nearly his entire career, he is now 0 for 55 overall this season — not safely reaching base once — after going hitless in three at-bats.

But on the mound, he was almost unhittable.

“Scherzer is like we’ve seen before,” Reds manager David Bell said. “He can take over a game. He did today.”

Sonny Gray (7-8) retired the first 11 batters he faced before Trea Turner’s infield single in the fourth, but then the Reds defense let him down.

The Dodgers took advantage of two Reds errors to score three times in the fifth, breaking open a scoreless game. Gavin Lux tripled for the fourth time this season, driving in two of the runs.

That was all the run support Scherzer needed. Not even a delay due to an umpiring change in the fourth got him off track.

“I was just sitting underneath out of the sun,” Scherzer said. “I was able to get some big outs in that inning. Fortunately that inning didn’t go sideways.”

Mookie Betts added an RBI single for the Dodgers in the ninth.

“It takes a very crisp, crisp game to win against the Dodgers,” Gray said. “It didn’t go that way for us today.”

The Reds were one out away from being shut out when a throwing error by shortstop Corey Seager gave them a run. Kenley Jansen relieved and got the last out for his 34th save.

“Every thing had to go perfect when you’re facing a pitcher like Scherzer,” Bell said. “We didn’t make plays we usually make. We don’t know how much difference it would have made.”

Turner was a teammate of Scherzer’s in Washington during two of his Cy Young Award seasons. Turner said this current stretch ranks among Scherzer’s best. “This is as good as I can remember him,” Turner said. “He’s been so efficient lately. In the past, he would have his games when he’s had to throw 100 pitches in six innings and have to grind it out. He’s still striking people out. It’s as dominant as I’ve seen him.” Scherzer threw 96 pitches on Saturday, 63 for strikes.

The game was delayed several minutes in the middle of the fourth inning when home plate umpire Brian O’Nora left the game due to illness. Second base umpire and crew chief Fieldin Culbreth took over behind the plate and the game continued with three umpires.