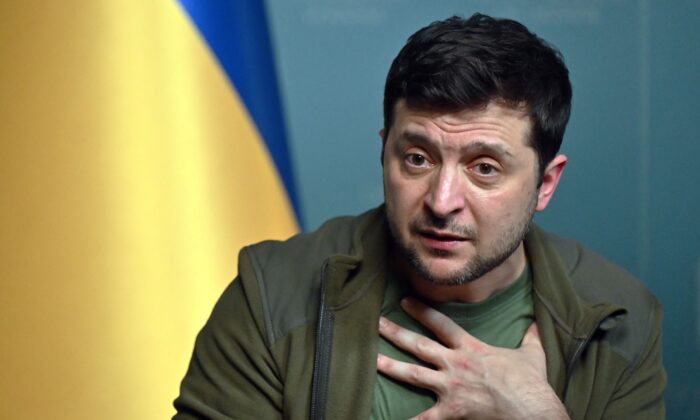 Zelensky: Ukraine Must Recognize It Will Not Join NATO

Ukraine President Volodymyr Zelensky said his country has to accept that it will not become a member of the NATO military alliance, a critical Russian concern that was used to justify the invasion.

“Ukraine is not a member of NATO. We understand that. We have heard for years that the doors were open, but we also heard that we could not join. It’s a truth and it must be recognized,” Zelensky said during a video conference with the UK-led Joint Expeditionary Force on Tuesday.

At the same time, Zelensky again called on NATO, which has provided the Ukrainian military with weapons and ammunition, to establish a no-fly zone over his country. U.S. and NATO officials have said such an agreement is not feasible as it would likely escalate the conflict with Russia.

Peace talks between Russian and Ukrainian delegations restarted Tuesday after a pause on Monday, according to Ukrainian presidential adviser Mykhailo Podolyak

But Kremlin spokesperson Dmitry Peskov told news outlets that it was too early to predict the outcome, saying: “The work is difficult, and in the current situation the very fact that [the talks] are continuing is probably positive.”

Last week, Zelensky told ABC News that he realized that Ukraine wouldn’t join NATO “long ago” and came to that conclusion “after we understood that NATO is not prepared to accept Ukraine.” He did not elaborate.

Meanwhile, Zelensky has ramped up his criticism of the U.S.-led military alliance for not enforcing a no-fly zone, which would likely require U.S. and European warplanes to shoot down Russian planes.

“Unfortunately, today there is a complete impression that it is time to give a funeral repast for something else: security guarantees and promises, determination of alliances, values that seem to be dead for someone,” he said earlier this month.

It comes as two powerful explosions rocked Kyiv before dawn on Tuesday and tracer fire lit up the night sky. A high-rise apartment building was in flames in the morning after being struck by artillery.

Amid the increase in shelling, Kyiv Mayor Vitaliy Klitschko said Tuesday on Telegram that a 35-hour curfew will start at 8 p.m. Tuesday, ending at 7 a.m. on Thursday. He warned that movement through the city without special passes was prohibited unless civilians head to bomb shelters.

“The capital—the heart of Ukraine—will be defended!” Klitschko, a former heavyweight boxing champion, wrote on social media. “And Kyiv, which today is a symbol and outpost of European freedom and security, we will not give up! We will not be brought to our knees! Today the efforts of every Kyivan are important.”

The United Nations’ refugee agency said on social media that it estimates some 3 million people have fled Ukraine into neighboring countries since the start of the Feb. 24 conflict.

Polish Prime Minister Mateusz Morawiecki wrote Tuesday that he and deputy prime minister Jarosław Kaczynski along with Czech Prime Minister Petr Fiala and Slovenian Prime Minister Janez Jansa would be traveling to Kyiv to meet with officials as representatives of the European Council.

“Europe must guarantee Ukraine’s independence and ensure that it is ready to help in Ukraine’s reconstruction,” he said in a Twitter post.