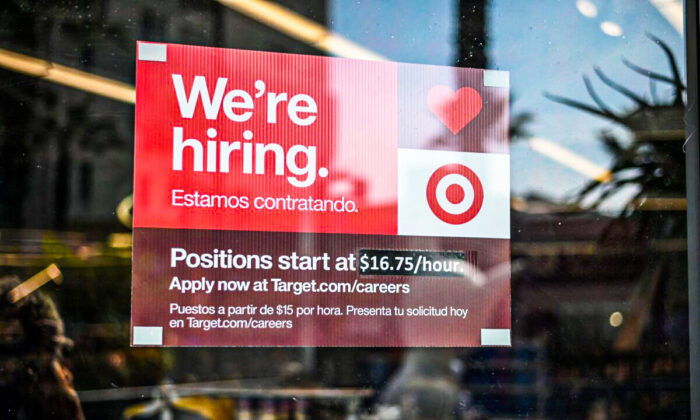 A sign advertising for new employees with an updated starting salary of $16.75 per hour is seen in the window of a Target store in Hollywood, Calif., on Nov. 9, 2021. (ROBYN BECK/AFP via Getty Images)
Companies

Companies are struggling to hire seasonal workers as they head into the busy holiday season during one of the tightest labor markets in U.S. history.

The number of part-time jobs has increased by 31.4 percent over the past four weeks, according to data from global job search engine Adzuna. The rise coincides with the National Retail Federation’s estimate that retailers will hire 500,000 to 665,000 seasonal workers, compared to 486,000 last year.

In mid-October, Amazon announced plans for 150,000 seasonal jobs this year. Other retailers are taking on tens of thousands of workers to help stock shelves, serve customers, and carry out holiday deliveries.

Even as the number of jobs spikes, potential workers aren’t necessarily jumping at the chance to apply.

The underlying reasons stem from overarching trends rippling through the economy.

“There’s an extremely tight labor shortage that continues to stifle retail in particular,” Hawk said. “At the same time, we’re seeing businesses expect a return to pre-pandemic levels of consumerism.”

The National Retail Federation forecasts that holiday sales during November and December 2021 will surpass 2020 sales by 8.5 percent to 10.5 percent, for a total ranging from $843.4 billion to $859 billion.

A further obstacle for retailers comes from the sheer number of jobs available. Rather than spending months searching for an opening, potential employees have numerous options to compare.

“Workers are feeling more confident about the number of opportunities available and their ability to find another job, meaning if they’re unhappy, they’re now more likely to hand in their two weeks’ notice,” Andrew Hunter, co-founder of Adzuna, told The Epoch Times.

The pandemic’s toll on the number of workers available has also played a role in the currently limited labor market. Some retired early during COVID-19, due to a decision to live off their savings, or a desire to stay safe and healthy by remaining at home. Still others who lost a job simply chose not to look for a different one.

“Another group where we’ve seen high quit rates is women with young children who have been the hardest hit by pandemic-related school closures,” Hunter said.

Even as places reopen, households may not be resuming a life that mirrors their pre-pandemic ways.

“The cost of child care remains a blocker for many workers,” Hunter added.

In their quest to have enough laborers to cover the expected holiday sales surge, companies are getting increasingly creative.

“Large retailers are using every idea and incentive they can create to address the current and holiday labor shortages,” Rick Haughey, a managing director at Riveron, a national business advisory firm, told The Epoch Times.

Some companies are offering sign-on bonuses, or referral bonuses. Macy’s announced plans in September to hire approximately 76,000 full- and part-time employees for its Macy’s, Bloomingdale’s, and Bluemercury stores, call centers, and distribution and fulfillment centers. Macy’s also stated that current employees could be eligible to earn a bonus of up to $500 for each family member or friend they refer to join the retailer’s team.

Meanwhile, Amazon is offering sign-on bonuses of up to $3,000 for seasonal workers. Kohl’s, which is hiring about 90,000 seasonal employees, stated that new hires are eligible for up to a $400 bonus for working through the holiday season.

Besides offering a monetary amount for signing on, retailers are extending other benefits to encourage workers to stay. These perks go beyond traditional features that were accepted in the past.

“Employee discounts are no longer cutting it,” Hawk said. “While the biggest bonuses and incentives are offered for permanent staff, temporary staff are still benefiting from increased salary options in the current market.”

Amazon’s starting pay for seasonal workers is $18 an hour, with an additional $3 per hour based on shifts in certain locations.

The benefits available at some retailers are tailored to fit the lifestyle many employees seek.

“These days, employees are going after much more than financial incentives alone, showing it’s not only about cash for the modern worker,” Hunter said. “Instead, people want workplaces that fit better around the rest of their lives, by offering a flexible working culture, a good work-life balance, or benefits such as child care support or enhanced annual leave.”

Retailers who tune in to the priorities that have emerged through the pandemic may have an easier time keeping workers.

“After dealing with the added stress from the pandemic and work-life boundaries blurring, many Americans have realized the importance of their mental and emotional well-being,” Hunter said.

Looking past the holidays, retailers that offer benefits to support this mindset could have an easier time hiring and retaining a workforce.

“In the long term, many now value this more than monetary incentives like signing and holiday bonuses,” Hunter said.

Giving employees the opportunity to develop new skills and grow in their careers may trend in the coming year.

“Some retailers are offering employee benefits packages including tuition reimbursement and the opportunity to transition from seasonal to permanent jobs,” Haughey said.

The option to start a job during the holiday season, stay on with new-and-improved benefits, and move up the career ladder may be the recipe that leads to filled positions at retailers around the country.