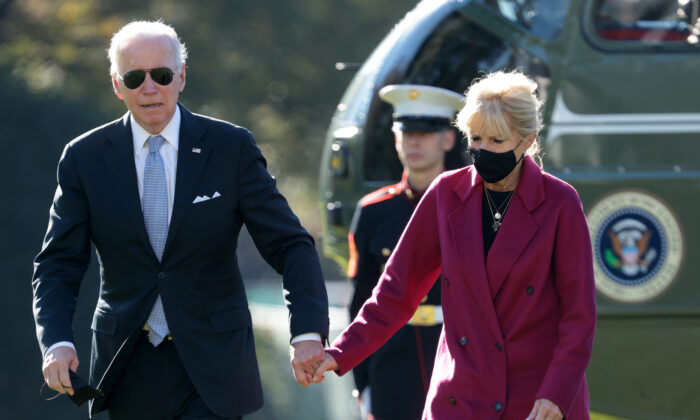 Proposed payments to illegal immigrants will be determined by the Department of Justice (DOJ), the White House said amid pushback from Republicans in Congress.

The Biden administration is engaged in negotiations to reach settlements in lawsuits brought by illegal aliens separated from family members during the Trump administration.

After initially appearing to deny that payments to the foreign nationals were being considered, President Joe Biden on Nov. 6 said they “deserve” compensation for what they went through.

Biden and a spokesperson for the president said his initial denials were centered on the reported number of $450,000 per person.

The DOJ will ultimately decide how much the illegal immigrants will receive, White House adviser Cedric Richmond, a former Democratic U.S. representative, said a day later.

“If the DOJ determines that it saves the taxpayers money and it rights a wrong, then they will make the determination that is necessary, and I would assume if they make a determination, they’ll come up with what they think is an adequate dollar amount,” Richmond said on “Fox News Sunday.”

Richmond alleged that some of the children separated from adult family members have yet to be reunited with their relatives. The White House didn’t immediately respond to a request for information backing up that claim.

Republicans have decried the proposal to pay illegal immigrants.

Sen. Steve Daines (R-Mont.) and 22 other Republican senators last week introduced an amendment to the National Defense Authorization Act for Fiscal Year 2022 that would block taxpayer-funded settlements for illegal immigrants. They also introduced the measure as a standalone bill.

“Biden’s open border policies have reached a new crazy level. Montana families are struggling with inflation and skyrocketing costs on everything from gas to groceries because of Biden’s wasteful spending policies, and now the President wants to give hundreds of thousands of dollars to illegal immigrants. Because of Biden, our southern border has been taken over by Mexican cartels and this effort will only continue to incentivize illegal immigration making it worse. This is a gut punch to the American taxpayer,” Daines said in a statement.

“Law-abiding, hardworking Americans have seen their purchasing power decimated by Biden’s economic policies while he has surrendered our southern border. Paying illegal immigrants $450,000 apiece as an apology for Trump’s decision to enforce our immigration law adds insult to injury. Congress has the power of the purse, and that’s why we must act today to stop this outrageous plan in its tracks,” McClintock said in a statement.

Richmond challenged critics, saying on Nov. 7 that “we cannot with a straight face say that parents are willing to separate from a child for ​a dollar amount.”

“That’s just not true,” he said. “And we should not talk like that.”

Asked for more details on the proposal during the Nov. 8 briefing in Washington, White House deputy press secretary Karine Jean-Pierre referred reporters to the DOJ.

The agency, which has confirmed that talks on the payments are ongoing, declined to answer several questions about the negotiations.