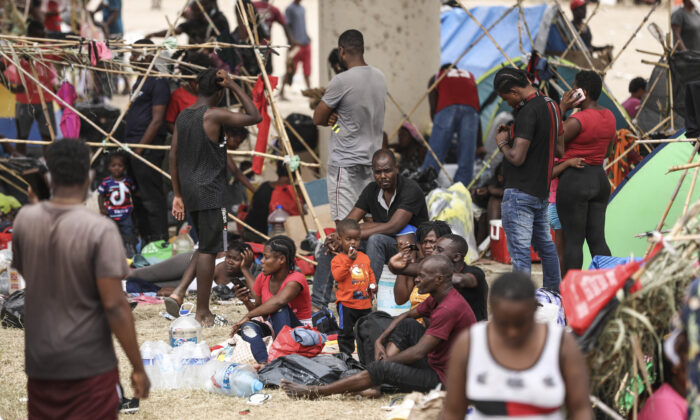 Thousands of illegal immigrants, mostly Haitians, live in a primitive, makeshift camp under the International Bridge, that spans the Rio Grande between the United States and Mexico, while waiting to be detained and processed by Border Patrol, in Del Rio, Texas, on Sept. 21, 2021. (Charlotte Cuthbertson/The Epoch Times)
Immigration & Border Security

US Deports Over 1,000 Haitians but DHS Declines to Say How Many Released Into America

DEL RIO, Texas—The United States has deported more than 1,000 Haitians who streamed into the small border city of Del Rio, Texas, although officials are refusing to say how many others have been released into America’s interior.

The number of illegal immigrants, primarily from Haiti, rapidly grew under the international bridge near the border last week, at one point topping 14,000. The quick jump sparked the deployment of more than 600 agents and officers, as well as repatriation flights to Haiti.

U.S. officials have since moved more than 6,500 people from Del Rio to other parts of the border in an attempt to alleviate pressure. Approximately 1,083 have been deported back to Haiti on nine flights through Sept. 21, a Department of Homeland Security (DHS) spokesperson told The Epoch Times in an email.

Others are being released into the interior. How many is unclear, because DHS officials aren’t saying.

The same spokesperson declined to answer questions about those being released, while Customs and Border Protection as well as Immigration and Customs Enforcement, both offices within DHS, referred The Epoch Times to DHS.

Border Patrol dropping Haitians off at local NGO Border Humanitarian Coalition after processing them. NGO gives them food, water, etc, and loads into buses to interior of United States. pic.twitter.com/TuWxF7163w

White House press secretary Jen Psaki refused to give the data during a briefing in Washington and DHS Secretary Alejandro Mayorkas has twice this week declined before Congress to share data about the number of illegal immigrants being released. On Sept. 21, he told senators in Washington he didn’t have the precise numbers and wanted to wait so he could provide accurate information; on Sept. 22, he again said he didn’t have the data.

“Yesterday, you were asked exactly the same question and you gave exactly the same answer. You would think you would be a little better prepared now that you’ve been asked that question. … You don’t have that information?” Rep. Carlos Gimenez (R-Fla.) said.

“I work 18 hours a day. So when I returned from yesterday’s hearing, I actually focused on the mission,” Mayorkas responded. “We will get that data both to the senator who posed it yesterday and to you, congressman, today.”

The Biden administration is dealing with an unprecedented surge in illegal immigration, a surge critics say stems from his administration’s policies. The number of illegal immigrant apprehensions at the southern border is on track to set a new record for the calendar year. And the administration has refused to shift its strategy, claiming it’s working.

Part of the strategy is releasing illegal immigrants into the country’s interior, which has been described by some as “catch and release.” Some 600,000 illegal aliens have been released into the United States since President Joe Biden took office on Jan. 20, Brandon Judd, president of the National Border Patrol Council, told The Epoch Times in a text message.

That’s about half of the aliens who have been stopped by border agents since the inauguration. They’re released with a Notice to Appear, which gives a future court date to kick off their immigration proceedings, or a Notice to Report, a new phenomenon that requests the alien reports to a local ICE office within 60 days of being released.

Two U.S. officials told The Associated Press that many Haitians are also being freed, undercutting Mayorkas’s claims that Haiti nationals shouldn’t travel to the United States because they won’t be able to stay. One official said many of those being freed are being told to report to an immigration office within 60 days, as opposed to receiving a notice to appear in court.

An ICE spokesperson told Fox News that the agency has, over the past several weeks, “released numerous immigrants who transferred from the border after determining they could safely be released into the community under alternate forms of supervision.” One independent reporter spoke with Haitian nationals on a flight out of Texas headed to inland destinations.

Roughly 8,400 illegal immigrants remained in the makeshift Del Rio camp as of late Sept. 21. Mayorkas told senators on Sept. 21 that the goal was to clear the litter-ridden camp in the next 10 days, with “dramatic results” expected in the next two to four days.

That could prove difficult if more keep crossing the border illegally.

Rep. John Katko (R-N.Y.), the top Republican on the House Homeland Security Committee, said on Fox News that lawmakers were briefed on Sept. 21 that 40,000 to 60,000 more Haitians are amassing in Central America “and are on their way in a caravan up to the southwest border.”

Katko said some Haitians are being deported but some aren’t.

“Why? We don’t know,” he said. “The lack of consistency is feeding the frenzy to come across the border, the Southwest border. It’s making our country a lot less safe.”

While Republicans call for more deportations, some groups and Democrats are calling to stop them altogether.

“Deportation flights to Haiti must stop, and those seeking safety at our borders must be granted their legally assured chance to seek asylum,” a coalition of 39 groups, including the American Civil Liberties Union, wrote to Biden on Sept. 21.

Senate Majority Leader Chuck Schumer (D-N.Y.), who rarely criticizes Biden, took him to task on the Senate floor in Washington.

“The policies that are being enacted now—and the horrible treatment of these innocent people who have come to the border—must stop immediately,” Schumer said.