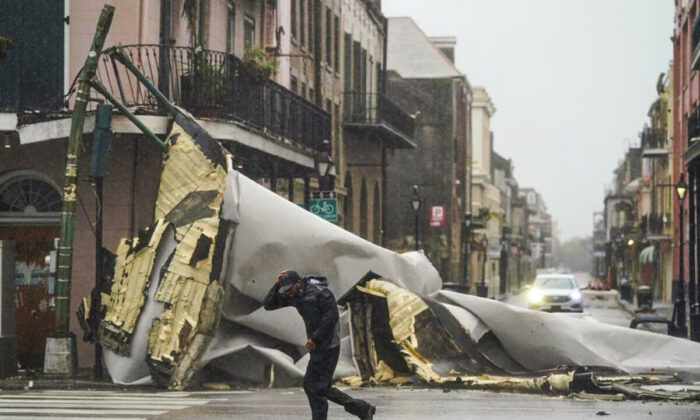 A man passes by a section of roof that was blown off of a building in the French Quarter by Hurricane Ida winds, in New Orleans, La., on Aug. 29, 2021. (Eric Gay/AP Photo)
US News

Hurricane Ida is ravaging portions of southeastern Louisiana, according to the National Hurricane Center’s (NHC’s) latest update on the evening of Aug. 29, as more than 440,000 customers across the region have lost power.

The hurricane’s northern eyewall made landfall near Port Fourchon, Louisiana, at around 12:50 p.m. ET, according to the NHC. The storm had maximum sustained winds of 150 miles per hour and a minimum central pressure of 930 millibars. It made a second landfall in nearby Galliano.

As of 4 p.m., the NHC said that Ida is moving northwestward over southeastern Lousiana, bringing “catastrophic” storm surge (a rise in ocean level), flash flooding, and “extreme winds” to the area. The storm currently has 130 mph winds, the NHC said.

The 150 mph winds are stronger than Hurricane Katrina, a Category 3 storm, when it made landfall in southeastern Louisiana 16 years ago.

Before and after security camera footage from Fire Station #12 in Delacroix within a 1 hour time span. #idahurricane #HurricaneIda #Hurricane #Category4 pic.twitter.com/9PL8V9KySA

According to PowerOutages.us in an update at 5:20 p.m., more than 449,000 customers were without power in Louisiana, and thousands more had lost power in neighboring Mississippi.

Flooding is the greatest danger posed by Ida, as 12 to 16 feet of storm surge is expected near the mouth of the Mississippi River as well as Port Fourchon.

“A turn toward the north is expected overnight, followed by a slightly faster northeastward motion by Monday night and Tuesday. On the forecast track, the center of Ida will move farther inland over southeastern Louisiana tonight. Ida is then forecast to move well inland over portions of western Mississippi Monday and Monday night, and move across the Tennessee Valley on Tuesday,” according to the NHC.

The New Orleans Emergency Management Services wrote on Aug. 29 that it has suspended all operations.

“NOEMS operations have been suspended due to dangerous winds,” the department wrote in a tweet on Aug. 29. Operations will start again once conditions are safe for first responders.

Stunning video taken from inside the eye of #Ida this morning by the NESDIS Ocean Winds Research team during a flight on the @NOAA_HurrHunter P3 aircraft @NOAASatellites pic.twitter.com/sjt970Yeiq

“This is going to be a devastating hurricane,” President Joe Biden said on Aug. 29 at the Federal Emergency Management Agency (FEMA) headquarters. He told locals that they should “please take precautions. … Take it really very seriously.”

The “whole of government” is going to work on storm recovery after Ida’s devastating impacts, the president said, adding that it will “take a long time” for power to be restored in some areas. Biden also warned of heavy rainfall in the area, coming as the National Hurricane Center warned of between 12 and 20 inches of rain falling in the area.

The storm surge, along with winds as strong as 150 mph, could leave portions of southeastern Lousiana uninhabitable for weeks or even months, according to a statement from the National Weather Service in New Orleans, noting that some buildings along the coast will wash away due to the high winds and storm surge.

Between 15 and 20 inches of rainfall could come to New Orleans, the NHC said, noting that the city’s pumping systems could be overwhelmed, according to the National Weather Service.

On Aug. 28, Louisiana Gov. John Bel Edwards said Ida could be the worst storm to hit his state in 170 years and the worst since Hurricane Katrina, which hammered New Orleans and surrounding areas 16 years ago to the day, killing about 2,000 people and displacing tens of thousands more.

“As conditions begin to deteriorate, stay in a safe place. Watch your local news, continue to heed the warnings of local officials, and do not put yourself in danger. Today is not the day to be outside,” Edwards also wrote in an Aug. 29 morning tweet.

“Time is not on our side. It’s just rapidly growing, it’s intensifying,” New Orleans Mayor LaToya Cantrell said on Aug. 28. “If you’re voluntarily evacuating our city, now is the time to leave … you need to do so immediately, if you’re planning to ride it out again make sure that you’re able to hunker down.”

“[Ida is] moving fast and landfall of the storm’s eye is expected [around] 1 p.m. today in south Louisiana. Hurricane level winds [are] possible as [the] storm enters SW MS south of Natchez area in next 24 hours,” Reeves wrote on Twitter. “Please be weather aware, get prepared, and watch for updates!”