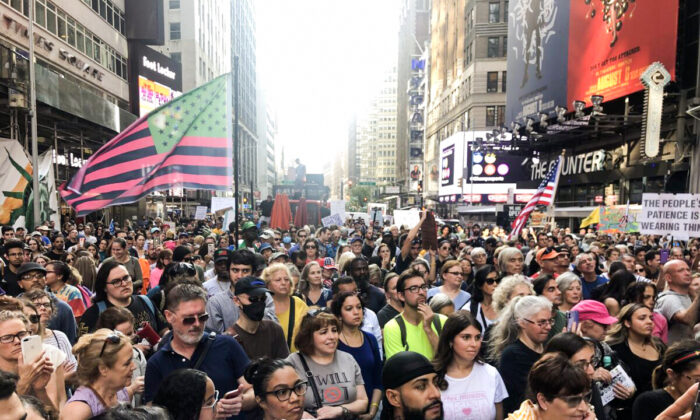 MANHATTAN, New York—What was initially a crowd of hundreds protesting against vaccine mandates and biased media had grown to thousands by 1 p.m. on Saturday in the heart of New York City.

On adjacent corners in Times Square, people of almost all ethnic backgrounds could be seen holding signs demanding “bodily autonomy” and a pro-choice stance with regard to COVID-19 vaccines and mandates, along with statements that suggested their views are being suppressed.

At the main rally site, “trap” music bounced off the buildings of Times Square. The lyrics expressed defiance against vaccine mandates and tyranny as the crowd grew at a pace of about a dozen people per minute. Some passersby scoffed while others looked intrigued.

The event, “NYC—Broadway Rally For Freedom,” featured a series of speeches, including Robert F. Kennedy Jr., the nephew of President John F. Kennedy.

The event kicked off with a singer performing a rendition of the National Anthem as people held their hands over their hearts.

Another young lady playing an electroacoustic nylon guitar projected her mellow voice through the microphone, changing the mood into one of pensive hope. After delineating the current situation on vaccine mandates in her lyrics, she prayed to Jesus that people be helped.

Kennedy then took the microphone to claim that COVID-19 vaccines are causing harm to people, and stressed that children should not be given the jab.

“We have no business giving this to children, it’s unethical,” said Kennedy, who was not featured in the event flyer, as people cheered.

New York Gov. Kathy Hochul said earlier this week that it’s “inevitable” that the vaccine will be permitted for children.

Kennedy said that 17 attorneys general, from “the Democratic Party, my party,” wrote a letter to Mark Zuckerberg on Saturday demanding that Kennedy be removed from Facebook.

“I have to be very careful in Facebook,” Kennedy said, “I only post pictures of rainbows and unicorns … and this kind of stuff, I don’t say anything about vaccines.”

Kennedy praised Facebook’s appeals process, noting, “The judges in that process are law professors from all over the world, very prestigious law professors. I believe that if I got an appeal process there is no chance that I would lose it, because Facebook can’t show a single piece of misinformation I put out there.”

“When they say ‘misinformation,’ it’s a euphemism for any statement that departs from official government pronouncements or claims from the pharmaceutical companies—it has nothing to whether it’s accurate or inaccurate.”

“We have on our advisory board a Nobel laureate, the man who discovered the HIV virus in 1993,” Kennedy added. “We have the former head of the national toxicity program in HHS, the No. 1 expert in the world in toxicity. We have 312 Ph.D. scientists and physicians, and if I were spouting misinformation, they would not stay on our site. The reason they stay there is because every statement that we make is cited from a government database or to a peer-reviewed publication. They cannot point to a single inaccurate statement that we make.”

Then he turned to the subject of individual liberty.

“Here’s what’s happened in the Constitution over the last year. First of all, the First Amendment is gone.”

He also criticized the closure of churches for a year as a violation of religious freedom, noting that liquor stores were kept open having been deemed essential businesses.

“There is no pandemic exception to the U.S. Constitution of the Bill of Rights.”

After his speech, he told The Epoch Times: “Thank you for everything you’re doing, thanks for keeping freedom of the press alive in this country.”

Another notable speaker was Dr. Christiane Northrup, a board-certified OB/GYN physician who focuses on natural treatments.

“This has been my entire career, bioidentical hormones, herbs, things that God made. Those cannot be patented. So all of medicine—the way you see it, conventional medicine run by big pharma—has sought to take all naturally occurring substances, change them, and make them patentable so they could make a profit.

“We know from fertility clinics, women that had the shot, their eggs don’t develop anymore,” she told the crowd.

The Epoch Times approached Northrup to ask her to clarify some of her assertions with solid medical evidence.

“What we are seeing, this is clinical data, women are having bleeding,” she said. “[T]he weird bleeding is happening in all age groups, including 18-month-old girls and 90-plus-year-old women.”

“Some doctors in our area are saying it’s not unusual. Let me tell you—as a board-certified gynecologist—that’s very unusual. Women’s periods are messed up all over the place.”

“We had a huge Facebook group of thousands of women talking about this situation. It was removed,” Northrup said.

“We also have these stories of women trying to get pregnant, and if their husband is vaccinated, they’re getting what is called a ‘decidual cast,’ meaning the entire inside of the uterus just sloughs off. We’ve never seen this sort of thing before.”

She then recommended Dr. Sherri Tenpenny’s “20 Mechanisms of Injuries” from vaxxter.com, a webpage that says it has “scientific articles exposing vaccine myths and pharma foibles.”

There “you’ll find the citations for the fact that the spike protein interacts with 28 different tissues,” Northrup said. “One of them is called Syncytin, it’s absolutely necessary for the placenta. There’s also a substance in the vaccines called SM-102. It’s a poison. It concentrates in the ovaries 64 times what it is in other tissues.”

After an hour of speeches, the crowd marched along the streets of Manhattan in what was named a “March against the Media.”

“I’m not against the media at all. All I want the media to do is just to start to tell the truth,” Jenkins told The Epoch Times.

“The interesting thing about it is, if the media does not get its act together, nobody is ever going to trust the media ever again, and that’s the truth.”

As the group started marching, they chanted, “The vaccine you won’t force. My body, my choice!” “We the people, will not comply!” and “What do we want? Freedom, when do we want it? Now!”