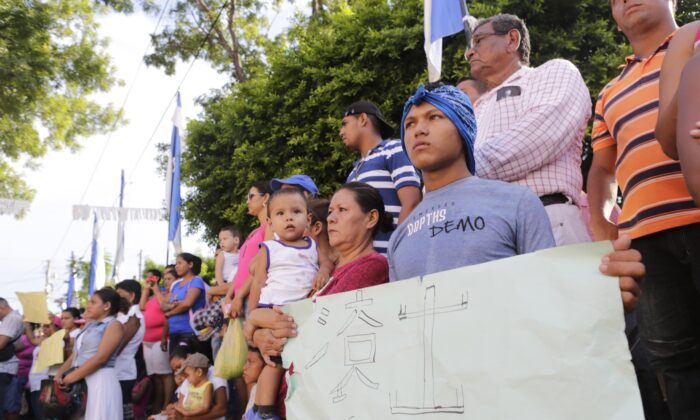 The $31 Billion Bubble Scam and the Nicaraguan Canal Myth

In May, the Shanghai Stock Exchange (SSE) imposed disciplinary sanctions on the Beijing Xinwei Technology Group Co. (Xinwei Group) and its chairman, Wang Jing. The sanctions included the delisting of the company’s shares and disallowing Wang to serve in any managerial capacity of listed companies for 10 years.

Subsequent to the sanctions being imposed, the Xinwei Group’s assets fell to negative $2.3 billion and created significant financial turmoil for more than 100,000 of its shareholders.

Xinwei Group created a scandal when it failed in its promise to build a navigable waterway through Nicaragua that would have rivaled the Panama Canal in size.

In 2012, Wang initiated contact with Nicaraguan authorities to discuss getting permission to build a Nicaraguan canal. Xinwei Group formed HKND Group, a private company in Hong Kong, that would oversee the construction of this major canal.

In July 2013, The Telegraph reported on Wang’s plans to build the 170-mile Nicaragua Grand Canal, which was to connect the Pacific Ocean and the Caribbean Sea. The $40 billion venture was touted to challenge the eighth wonder of the world—the Panama Canal’s monopoly on shipping in Central America—and forever change international shipping routes.

Wang’s canal idea wasn’t new. In 1567, King Philip II of Spain proposed the same idea and conducted site surveys for the project. Then, during the early part of the 19th century, the French Emperor Napoleon III proposed a similar project for the region.

Even the U.S. government had considered building a canal through Nicaragua at the start of the 20th century, but abandoned those plans after negotiating with the French to purchase and complete their work on the Panama Canal. There would be no further talk about a Nicaraguan canal until Wang’s route plan was approved in 2014.

Wang’s plan was to complete the Nicaraguan canal within five years, after which the main investor, HKND Group, would be granted rights to use the canal and its facilities for 100 years. In the meantime, more than 400,000 jobs would be created, although this wouldn’t prevent local members of the South Atlantic Autonomous Region from protesting and saying: “Our land is not for sale and will not be given away,” “Chinese people get out,” and “No canal.”

Despite the public protests, the Nicaraguan government agreed to proceed. Wang increased the canal’s total investment to $50 billion. On the day that construction began, the world watched as Wang and Nicaraguan President Daniel Ortega were photographed cutting the ceremonial ribbon.

The project didn’t evolve as was initially hyped. A few years later, the BBC reported that the $50 billion project employed fewer than 30 people and had only built a dusty trail of about 10 kilometers. What was once an engineering phenomenon had become the scam of the century.

After concluding the Nicaraguan canal agreement in June 2013, the Xinwei Group began to leverage the project’s growing prestige to attract investors and shell listings. In September 2013, it announced a shell listing of the Beijing Zhongchuang Telecom Test Co. for a total consideration of $4.2 billion. Over the next two years, its market value exceeded $31 billion, and it was listed on the SSE 50 Index.

The Xinwei Group’s initial appeal would eventually evaporate due to its weak foundation, mysterious dealings, and lack of transparency. The group was originally formed in 1995 by Datang Telecom, a Chinese state-owned entity. It didn’t do well financially and was acquired by Bonade Investment Co., which declared Wang as the principal shareholder. From there, Wang, the owner of Beijing Changping Bathhouse and a drop-out from Jiangxi University of Traditional Chinese Medicine, transformed into the chairman of Xinwei Group.

After taking over as chairman of the Xinwei Group, Wang claimed that the company had turned a loss into an $88.4 million profit, due to a large order of $466 million from Cambodia. But an investigation report by NetEase Finance in 2016, “Xinwei Group’s Surprising Game: Hiding Huge Debts and Mysterious People Cashing Out,” stated that Wang’s report was fraudulent.

The profits he reported were based on an illusion created by Xinwei Group and its subsidiary, Cambodia Xinwei.

The investigation discovered that the subsidiary had agreed to order $466 million in products from parent company Xinwei Group. The parent used the order as collateral to obtain a $466 million loan from the China Development Bank. The borrowed funds were then used by the subsidiary to fund its order from the parent. That’s equivalent to using the guarantee for revenue.

Wang used international hot projects to grab public attention within China. He was instrumental in forming Beijing Skyrizon Aviation, a company that was sanctioned by the United States for attempting to acquire a Ukrainian aviation engine company. Other projects included building a deep-water port in Crimea, acquiring an Israeli satellite company, and getting involved in overseas security. Wang even threw out the idea of an “air and space information network,” with the intent to launch one rocket that can carry four satellites within three years and to launch 32 or more satellites by 2019 to form a satellite communication system covering the world.

These hot projects and dreams made media and investors excited and helped the company to obtain new loans to pay back its old debt.

NetEase Finance confirmed that Xinwei Group’s apparent growth was based on lies and fraudulent practices. In fact, the company was heavily indebted and had enabled many of its mysterious shareholders to reduce their holdings or cash out their shares before any problems were exposed. Specifically mentioned were investors Wang Yongping, who salvaged $35.38 million; Wang Qinghui, who obtained $26.85 million; and Lu Dalong, who picked up $19.24 million. Wang Jing personally received at least $1.6 billion in cash in 2017.

On July 12, 2019, Xinwei Group’s trading was overturned after more than 900 days of suspension. After falling for 36 consecutive days, the company set a record for consecutive A-share losses, with market value evaporating nearly $29.5 billion. More than 150,000 of its shareholders were hurt by a per capita loss of $37,000, yet 120,000 shareholders remained on Xinwei Group’s list of investors as of the end of March.

It’s alleged that Wang has disappeared after pledging 35 percent of his Xinwei Group shares to major Chinese financial and securities companies, including China Development Bank and Shengjing Bank.

The scams perpetrated by Wang created havoc and financial ruin for thousands of people in China and around the world. It also brought suffering for the Nicaraguan people. The Nicaraguan government still holds the land and land development rights that were forcibly expropriated for the canal construction, and local residents are still upset with having been evicted from their properties. Many landowners were incarcerated, injured, or killed during conflicts with police and government authorities.