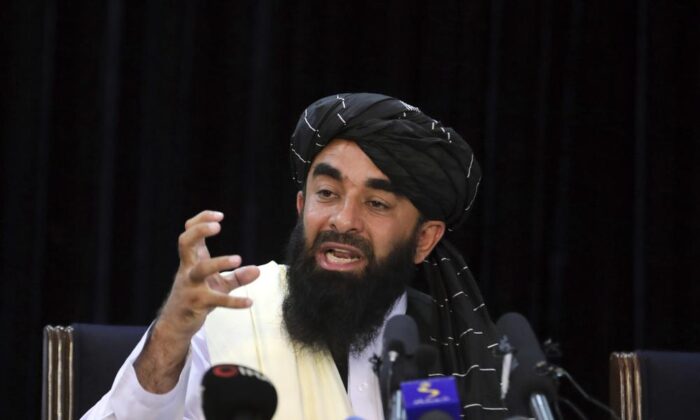 Taliban Spokesman: No Groups Will Be Allowed to Use Afghanistan for Terrorist Attacks

One of the Taliban’s main officials, spokesman Zabihullah Mujahid, claimed in a press conference Tuesday that no groups will be allowed to use Afghanistan’s territory to launch attacks against any nation.

Afghanistan’s territory will also not be used as training grounds for terrorist groups that can then launch attacks, he said.

“We don’t want any internal or external enemies,” Mujahid, who for years has remained a shadow figure and made no public appearances, said in his first press conference and public appearance.

During the 1990s when the group ruled the country, it harbored terrorist networks like al-Qaeda, which was blamed for the Sept. 11 terrorist attacks that ultimately sparked the U.S. invasion of Afghanistan in 2001. Other terrorist groups like ISIS and the Haqqani network are known to have a presence in the country.

That assurance that the Taliban won’t attack other countries was part of the 2020 peace deal brokered by the group and the Trump administration, which paved the way for the U.S. withdrawal.

But when the Taliban took over Kabul on Sunday and declared victory, Islamist terror groups celebrated on social media.

The Taliban, an Islamist organization, shares a similar worldview as al-Qaeda, al-Shabaab, ISIS, and other Sunni Islamist groups. There have also been reports that ISIS and al-Qaeda terrorists who were jailed in Afghanistan were freed by the Taliban during fighting last week. ISIS, however, has engaged in armed conflict with the Taliban since 2015.

“This is without a doubt the most significant day for al-Qaeda since 9/11,” Charles Lister, of the nonpartisan Middle East Institute, said in a post on Medium.com, arguing that al-Qaeda was in dire straits just a few weeks prior. “For the first time in years, not only does al-Qaeda finally have some breathing space, it’s being gifted an enormously significant safe haven in which to rebuild.”

Pro-al-Qaeda media accounts published a statement that congratulated the Taliban, writing: “Afghanistan is Conquered and Islam has Won,” according to the SITE Intelligence Group.

Some Republican lawmakers, meanwhile, wrote to the White House that they’re concerned that terrorist cells could develop in the war-torn country.

“We remain gravely concerned the void left in Afghanistan will be rapidly filled by terror groups. The Taliban now control the country. Al-Qaeda used Afghanistan to plot and execute the 9/11 attacks and other acts of terrorism. You cannot let this happen again,” wrote Rep. Mike Rogers (R-Ala.) and other Republican House members in a letter.