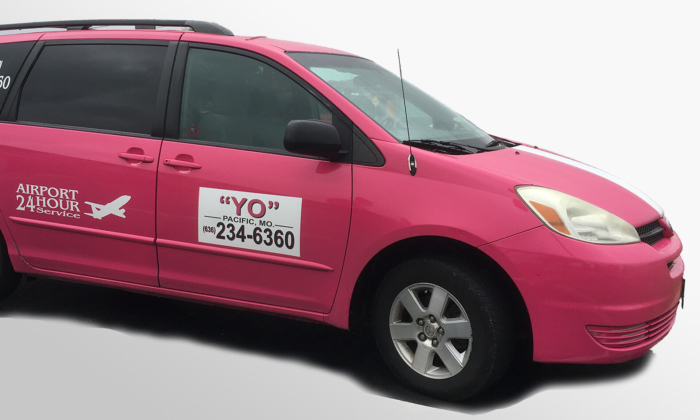 A Yo Transportation van. (Via yo-taxi.com)
Regional & Local News

A cab company in Missouri has rolled out a new rule for the COVID-19 vaccinated: If you’ve taken “the injection,” you’ll be denied service.

The same rule applies to wearing a mask.

“We kind of just let them know up front that we don’t allow masks in the vehicle. I ask them if they’ve done any ‘shots.’ I don’t get into the whys with customers. I ask them to do their own homework,” Charlie Burlington, owner of St. Louis-based Yo Transportation, told The Epoch Times.

Likewise, Burlington said he won’t serve customers carrying guns or marijuana, even with a doctor’s prescription, as a matter of policy.

“We have a ton of safety protocols,” said Burlington, 52, though none of them has been as hotly controversial as not serving people who’ve been vaccinated against COVID-19.

“I’ve been called a dumb-ass cab driver. ‘You don’t know [expletive]!’ ‘You’re not a doctor.’ A lot of them are stunned. A majority say it doesn’t make any sense,” Burlington said about the vaccination policy.

Burlington started the state-certified taxi company 16 years ago. He currently operates with a fleet of three bright pink vehicles.

Burlington said the company’s vaccine policy followed after he heard from customers who knew someone who had an adverse reaction to the injection.

“I have doctors on the inside [who oppose the vaccines] who are fighting for their jobs,” Burlington said. “I saw a general worker at a gas station that I’ve known for years. She said her co-worker who did the shot got very sick.”

Since the company started the vaccine policy, Burlington said his voicemail has been inundated—mostly from people expressing their support, but also with hate messages and death threats.

“I’ve heard from other business owners that support me 100 percent—especially from Texas. I’ve never been attacked as I have been now,” Burlington said. “Has this gained me any business—no!”

Yo Transportation isn’t the first small business to take a stand against the COVID-19 vaccines since their nationwide distribution began in December under President Donald Trump’s “Operation Warp Speed.”

Tony Pantalleresco, owner of Herb Plus Beadwork in Windsor, Ontario, in April posted a sign informing customers that they wouldn’t be allowed into the health and wellness store if they’ve taken the vaccine.

In May, an Australian hair salon owner announced she would refuse service to customers who have had the vaccine because of “unknown health effects.”

Dr. Jane Orient, executive director of the American Association of Physicians and Surgeons (AAPS) in Tucson, Arizona, said people should have the right to work whether they’ve been vaccinated or not.

“As Americans, we really should have the right to work for people we want to work for. We’re not slaves,” Orient told The Epoch Times. “There is certainly no law that says you can’t serve people who you believe to be a public threat. I can’t think of any good reason why you aren’t allowed to discriminate the other way.

“If enough people stand up for their rights, [businesses] are going to have to back off.”

While not widely reported in the media, he said a number of health care workers nationwide have begun to protest against the vaccine mandates.

“We’re living in a very lawless time that is very dangerous,” Staver told The Epoch Times. “[Companies] are not going to survive the legal challenges that are coming.”

Correction: The spelling of Attorney Mat Staver’s name has been corrected. The Epoch Times regrets the error.