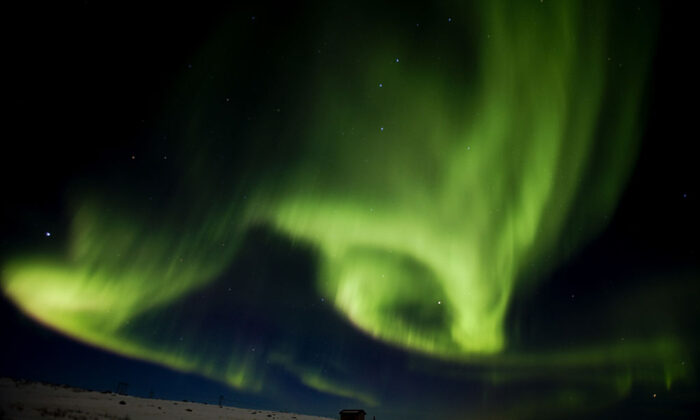 A geomagnetic storm caused by a solar flare is slated to impact Earth this week, potentially causing disruptions to power grids and satellite communications, according to the U.S. Space Weather Prediction Center.

The agency, which is run by the National Oceanic and Atmospheric Administration, issued a geomagnetic storm watch, noting that “moderate” conditions could be possible on Monday and Tuesday “due to the anticipated arrival of a CME,” or coronal mass ejection from the sun.

The CME could impact power grids around 55 degrees latitude, potentially triggering power grid fluctuations with voltage alarms at higher latitudes, according to the Space Weather agency.

Meanwhile, satellite “orientation irregularities” may occur, the agency said, adding that “high-frequency radio propagation can fade at higher latitudes.” The storm may increase the drag on low-Earth orbiters, said the bulletin.

The aurora borealis, or northern lights, could be seen as low as New York, Washington state, and Wisconsin, said the agency.

The UK Met Office weather agency wrote that aurora borealis sightings are “possible through [the] 11th across much of Scotland, although cloud amounts are increasing, meaning sightings are unlikely.”

“There is a slight chance of aurora reaching the far north of England and Northern Ireland tonight, but cloud breaks and therefore sightings are more likely in Northern Ireland,” the office added.

In 1859, an incident known as the Carrington Event triggered widespread disruptions to the telegraph systems around Europe and North America in what is believed to be the largest solar storm ever recorded. A similar storm nowadays would trigger a catastrophic scenario and significant damage worldwide.

“Our [internet] infrastructure is not prepared for a large-scale solar event,” Jyothi told Wired magazine in August, noting there would be widespread blackouts, traffic jams, and a further breakdown in the worldwide supply chain. “What really got me thinking about this is that with the pandemic we saw how unprepared the world was. There was no protocol to deal with it effectively, and it’s the same with internet resilience,” he continued.