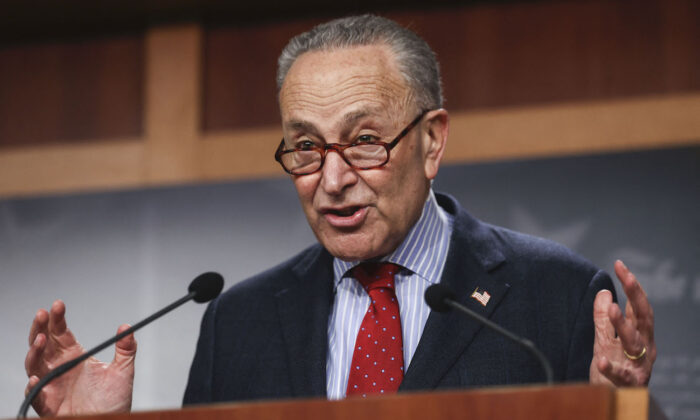 Senate parliamentarian, Elizabeth MacDonough, ruled in an opinion to allow the Democrats in the evenly-split 50-50 Senate to use the reconciliation process again in fiscal year 2021, a spokesman for Majority Leader Chuck Schumer (D-N.Y.) said on Monday.

The ruling potentially allows Democrats to pass President Joe Biden’s $2.25 trillion infrastructure proposal, dubbed the “America Jobs Plan,” via the reconciliation process—a procedural tool that allows a bill related to taxes, spending, and debt to be passed in the chamber by a simple 51-vote majority rather than having to pass the 60 vote filibuster threshold that would require support from 10 Republicans. The process also limits debate on the bill to 20 hours.

“The Parliamentarian has advised that a revised budget resolution may contain budget reconciliation instructions,” spokesperson Justin Goodman said late on Monday in a statement to news outlets.

“While no decisions have been made on a legislative path forward using Section 304 and some parameters still need to be worked out, the Parliamentarian’s opinion is an important step forward that this key pathway is available to Democrats if needed,” he said.

The 51-vote threshold can be achieved without any Republican votes because Vice President Kamala Harris, who holds the title of Senate president, can vote to break ties on bills. But a single senator can break ranks to influence the size and shape of the package.

On Monday, Sen. Joe Manchin (D-W.Va.), a centrist Democrat, indicated he would prefer a corporate tax rate at 25 percent, lower than what Biden is proposing.

“If I don’t vote to get on it, it’s not going anywhere,” Manchin said. “As the bill exists today, it needs to be changed.”

Schumer’s staff had recently argued to MacDonough that under Section 304 of the Congressional Budget Act of 1974, budget resolutions can be revised before the end of the fiscal year that they cover, and doing so could bring about another set of reconciliation instructions. As such, Democrats could revise the budget resolution for fiscal year 2021 and include instructions for another reconciliation bill, thereby opening the way for them to push forward with Biden’s proposal.

Energy Secretary Jennifer Granholm said on Sunday that Biden would be prepared to push through his infrastructure package without any Republican support.

Biden has said that the core of the package is to modernize transportation infrastructure. The White House earlier released a fact sheet detailing the first of a two-part plan that Biden wants to pass through Congress in the coming months. A separate plan addressing child and health care is expected to be announced later this month.

Senate Minority Leader Mitch McConnell (R-Ky.) has signaled multiple times that he will not support Biden’s latest infrastructure proposal. On Monday, he told reporters in Kentucky that Biden’s infrastructure proposal is “something we’re not going to do,” adding that Republicans would favor a “much more modest” approach, and one that doesn’t rely on corporate tax increases to pay for it. McConnell previously said that the America Jobs Plan does not heavily focus on infrastructure and is more like “another Trojan horse for far-left demands.”

A clear point of contention between the two parties on the bill is Biden’s effort to pay for it by raising the corporate tax rate to 28 percent from the current 21 percent—effectively undoing former President Donald Trump’s signing of a Republican-backed tax cut bill in 2017 that reduced the corporate rate to 21 percent from 35 percent. The infrastructure plan also calls for a global minimum corporate tax rate.