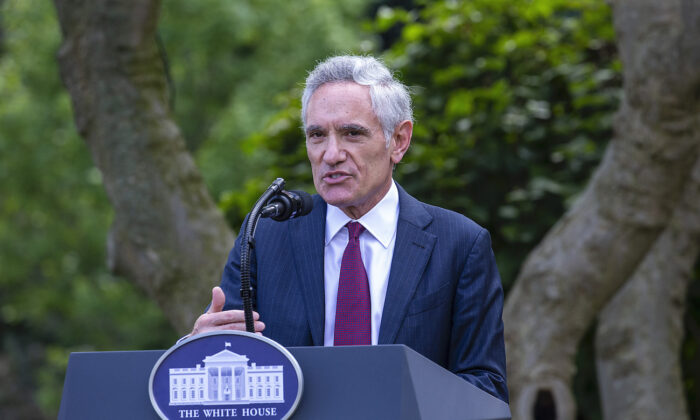 Dr. Scott Atlas delivers an update on the nation's COVID-19 testing strategy in the Rose Garden of the White House in Washington, on Sept. 28, 2020. (Tasos Katopodis/Getty Images)
AMERICA

Scott Atlas: Lockdowns Not Only a ‘Heinous Abuse’ of Power, They Also Failed to Protect the Elderly

FULL American Thought Leaders interview coming TONIGHT May 20 at 7 p.m. ET on Epoch TV: Scott Atlas: Lockdowns Not Only a ‘Heinous Abuse’ of Power, They Also Failed to Protect the Elderly

The lockdowns implemented to curb the transmission of COVID-19 in the United States and across the globe have not only been a “heinous abuse of power,” but they have also failed to protect the elderly and vulnerable, according to former White House COVID-19 adviser Dr. Scott Atlas.

In an interview for Epoch TV’s “American Thought Leaders,” Atlas, a public health policy expert, suggested that the consequences of lockdowns, which he believes have been largely fear-driven, will be felt in the country for decades to come.

“We will have a massive price to pay for what was done in the United States,” said Atlas. “The consequences of the lockdowns have been enormously harmful and they will last for decades after this pandemic is completely finished.”

In November 2020 Atlas resigned as former President Donald Trump’s special adviser on the White House pandemic task force. He is a senior fellow for the Hoover Institution at Stanford University.

A large failure on the part of public health experts, Atlas said, has been the approach to stop COVID-19, the disease caused by the CCP (Chinese Communist Party) virus, at all costs, disregarding the consequences of the policies that were implemented in an attempt to do so.

And while he believes that imposing initial lockdowns during the onset of the pandemic last spring was an “appropriate” response, that was only because the world was reacting to extremely “imperfect knowledge,” including an estimated fatality rate that was higher than what the world knows now.

Further, the restriction of movement orders implemented last year as the virus began to spread across the country were initially pushed as short-term measures to prevent the overcrowding of hospitals and health care facilities, he said.

Soon, Atlas said, rational thinking and critical thinking disappeared, and lockdown measures were driven by fear. No longer was the goal to prevent the overcrowding of hospitals, but it gradually shifted to stopping COVID-19 cases altogether.

“Fear is very powerful, and it was really shown how powerful fear is during this pandemic. They [Americans] bought into it because it was temporary, because [people] thought that would be a very small price to pay to get things sort of under control, and have some handle on how to proceed,” Atlas said.

The public health policy expert suggested that a “frenzy” took over out of fear, out of a lack of leadership by the faces of public health to put things into context and perspective, and to recognize immediately what the consequences of these lockdowns would be.

“There’s a big reason why lockdowns were never recommended in prior pandemics,” Atlas added. “And those rules, those simple rational logical assessments, were thrown out the window.”

Lockdowns have ultimately failed, Atlas said, as they failed to protect the elderly and high-risk individuals in the early months of the pandemic last year. Meanwhile, countless others have suffered due to diversions of medical resources.

“We saw even in March, April, May [2020], the lockdown policies were number one, failing to protect the high risk people—people were dying, they were elderly. The nursing home deaths made up 40 to 50 percent of all deaths,” Atlas explained. “And it was through many of our states; at one point in Minnesota, 80 percent of the deaths were [in] nursing homes.”

Americans were also skipping chemotherapy treatments, while people who had suffered acute strokes and heart attacks were too afraid to call an ambulance as they didn’t want to be in a medical setting, and the majority of live organ transplants weren’t conducted during the onset of the pandemic, Atlas said.

Meanwhile, child abuse and domestic abuse skyrocketed, opioid deaths and suicides surged, and there has been a dramatic rise in young people suffering from depression and anxiety, he added.

Citing June 2020 data from the U.S. Centers for Disease Control and Prevention, Atlas said that one in four young adults contemplated suicide.

“The lockdowns failed, they still failed to protect the people who are high risk, and the lockdowns destroyed and killed,” Atlas said. “Many other people destroyed families, sacrificed our children out of fear for adults—even though the children do not have significant risk. And we didn’t care as a country. We kept them out of school.”

He added: “It’s a disgrace. It’s a heinous abuse of the power of public health experts to do what was done.”