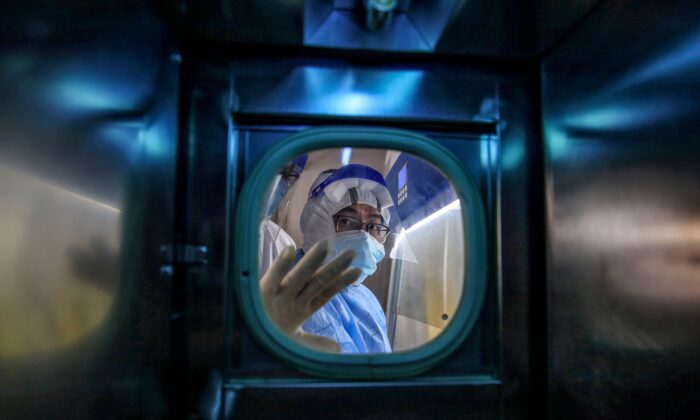 The proposal, dated March 27, 2018, details the organization’s plan to create entirely new coronaviruses through the synthetic combination of preexisting virus backbones. It describes how those viruses were going to be made more virulent in humans by the insertion of a furin cleavage site, a feature that distinguishes COVID-19 from all other SARS-related coronaviruses.

The new revelations contained in Daszak’s proposal will likely have far-reaching implications as to the ongoing search for the virus’s origins.

This feature of COVID-19 was often puzzled over by scientists early in the pandemic. While it has been argued that a furin cleavage site may have sprung up naturally, there’s no evidence of this ever happening. However, furin cleavage sites have been inserted in a laboratory setting.

A furin cleavage site can be inserted using seamless technology, a process that would leave no evidence of a lab insertion. Shi Zhengli, the director of the WIV and one of Daszak’s proposal partners, supervised a thesis in April 2017 that detailed how her lab was already performing experiments that replaced “the S gene without traces” on bat coronaviruses.

This lack of a traceable backbone has been a primary argument used by natural origin proponents in their claims that the virus couldn’t have been engineered. Kristian Andersen, a scientist who has become known for promoting the natural origin narrative, specifically cited this in his proximal origin paper.

“The genetic data irrefutably show that SARS-CoV-2 is not derived from any previously used virus backbone,” Andersen wrote.

The lack of a previously used backbone as the basis for genetic engineering doesn’t preclude the use of an unknown one. The natural origins argument presupposes that all scientists diligently posted their genomic backbone sequences to public databases. We know that the Wuhan Institute, which reportedly collected thousands of different viral strains during its work in southern China, abruptly took its database of viral sequences offline in September 2019.

Daszak’s proposal introduces another possibility, one that fits remarkably well with what’s known about COVID-19’s backbone. Daszak outlined a plan to create entirely new “consensus” viruses through the synthetic combination of existing viruses, resulting in an entirely new virus that wouldn’t be directly traceable on any family tree.

These “consensus” viruses, which didn’t exist in nature, would have no singular ancestor, because they would be a genetic average of the viruses used in their creation. The novel viruses would appear as composites of their underlying inputs.

A recent study examined more than 13,000 bats and found that many of them carried viruses related to the first SARS virus. But the study didn’t find a single instance of a virus related to COVID-19.

Daszak’s plan was to construct 3 to 5 such synthetic coronaviruses per year.

Within minutes of the teleconference’s start, one of the participants had emailed a question to the group: “We need to talk about the backbone too, not just the insert?”

Daszak’s 2018 proposal now provides a possible explanation as to why Fauci’s teleconference group also had an interest in the virus’s backbone.

If COVID-19 was created in a manner described in Daszak’s proposal, it would explain why we haven’t found a good match for the virus in nature. A synthetic virus, by definition, would be different from all other viruses and wouldn’t have any direct progenitor. The notion that COVID-19 is based on a synthetic backbone also is supported by the fact that it resembles existing viruses across various parts of its sequence.

Daszak’s proposal also detailed a plan to release airborne coronavirus vaccines into wild bat populations in China. The ostensible purpose was to inoculate the bats by releasing skin-penetrating aerosolized nanoparticles containing “novel chimeric spike proteins” into bat caves before the virus could jump to humans.

Although the notion of mass immunizing wild bat populations seems somewhat outlandish, Dasak’s proposal regarding the use of an aerosolized vaccine had remarkable overlap with work being conducted at the same time by the WIV.

According to emails recently released under a Freedom of Information Act request, Ping Chen, NIAID’s representative in China, sent an email in February 2018 that highlighted a new type of flu vaccine that had been developed by the WIV that utilized nanotechnology in its delivery process.

Chen included a media report that mentioned the new nanotechnology vaccine created by the WIV, and she alerted the Environment, Science, Technology, and Health (ESTH) Section at the U.S. embassy in Beijing, as well as the U.S. consulate in Wuhan. However, when Chen and ESTH tried to pursue the information, the Chinese news report had been scrubbed, and any links to the new vaccine were blocked on the Chinese internet.

The overlap between Daszak’s vaccine proposal and the new nanotechnology vaccine developed by the WIV is a possible indicator that work on Daszak’s plan was already in motion. Daszak has worked closely with Shi and the WIV for at least 15 years. Some scientists have also pointed out that the level of detail in Daszak’s proposal indicates that the work was already being done, but until now there was no tangible evidence of this.

Remarkably, Daszak’s 2018 proposal provides three separate potential links to the origins of the pandemic. It details how he and his collaborators from the Wuhan Institute of Virology planned to genetically engineer a “human-specific” furin cleavage site into coronaviruses. A furin cleavage site is the defining feature of the coronavirus that emerged in Wuhan in 2019.

The proposal also details the creation of entirely new consensus viruses that would effectively have no clear ancestor in nature. Again, the lack of ancestral lineage is a notable feature of COVID-19.

Ultimately, there appear to be only two possibilities for the virus’s origins: Either a virus was created at the Wuhan lab in line with Daszak’s 2018 proposal and ultimately escaped, or a virus with the same characteristics contained in Daszak’s proposal evolved naturally—and emerged in Wuhan, more than 1,000 miles from the nearest bat reservoir.