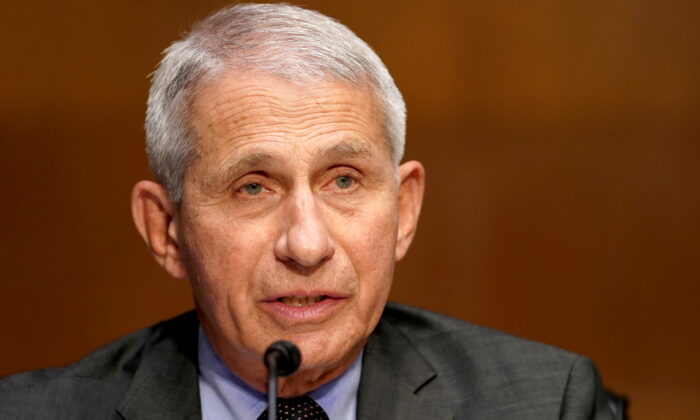 Dr. Anthony Fauci, director of the National Institute of Allergy and Infectious Diseases, gives an opening statement during a Senate Health, Education, Labor and Pensions Committee hearing to discuss the ongoing federal response to COVID-19, at the U.S. Capitol in Washington on May 11, 2021. (Greg Nash/Pool via Reuters)
Pandemic Ties to CCP

Top Republicans on Wednesday asked Dr. Anthony Fauci to explain what they described as an “apparent discrepancy” between his recent testimony before Congress and comments made during a conference years ago.

In 2012, Fauci, the longtime director of the National Institute of Allergy and Infectious Diseases, described the type of work later done at a laboratory in China as “gain-of-function” research, or enhancement of a virus’s transmissibility, adaptability, or pathogenicity.

“What historically investigators have done is to actually create gain-of-function by making mutations, passage adaptation, or other newer genetic techniques such as reverse genetics and genetic reassortment,” Fauci, the longtime director of the National Institute of Allergy and Infectious Diseases, said during a conference that examined gain-of-function risks and benefits.

Fauci’s agency gave a grant to the EcoHealth Alliance in 2014 to study the risk of bat coronavirus emergence.

Some of the funding was channeled through subgrants to the Wuhan Institute of Virology, which is located in the same city where the CCP (Chinese Communist Party) virus, which causes COVID-19, is believed to have first emerged.

The grant paperwork states that researchers would be using predictive models of host range. The models “will be tested experimentally using reverse genetics, pseudovirus and receptor binding assays, and virus infection experiments across a range of cell cultures from different species and humanized mice,” the documents say.

Fauci, though, told members of a Senate panel on May 11 that the National Institutes of Health “has not ever and does not now fund gain-of-function research in the Wuhan Institute of Virology.”

“This appears to contradict your 2012 statement regarding gain-of-function research and the WIV,” House Oversight Ranking Member James Comer (R-Ky.) and Rep. Jim Jordan (R-Ohio), the top Republican on the House Judiciary Committee, wrote in the new letter to Fauci.

“Can you please confirm the authenticity of the 2012 video accessible on the YouTube platform? Further, please verify that the 2014 grant description is accurate and explain the apparent discrepancy in your recent testimony?” they asked.

Fauci’s agency, which is part of the National Institutes of Health, has not responded to requests for comment on Fauci’s 2012 comments appearing to conflict with what he told Congress last month.

Fauci has been under intense criticism after internal emails to and from him were published recently after being obtained through Freedom of Information Act requests. Critics have said the emails show Fauci was doing different things in private than he said in public, such as meeting friends for meals while calling for a national lockdown, and want him to be fired or resign, and lying about some matters.

President Joe Biden and his administration have stood by Fauci. White House press secretary Jen Psaki offered recently that there was not a scenario she could imagine where Fauci would be terminated.

Fauci asserted during an appearance on NBC’s “Meet the Press” on Wednesday that people were making points regarding the messages that could be immediately debunked.

“When those data change, when you get more information, it’s essential that you change your position, because you’ve got to be guided by the science and the current data,” he said, referring to criticism that he said early last year that people should not wear masks before abruptly changing his recommendation. “That issue with masks is people want to fire me or put me in jail for what I’ve done—mainly follow the science.”