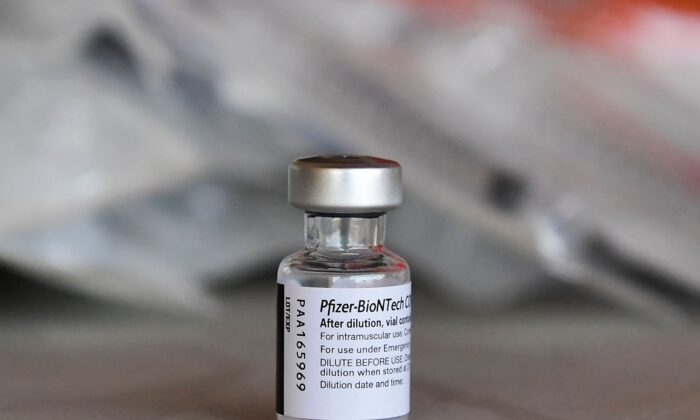 The effectiveness of Pfizer’s COVID-19 vaccine in preventing symptomatic infection drops by more than 10 percent after six months, the company said on July 28.

The two-dose vaccine, developed in conjunction with Germany’s BioNTech, was found to be 96 percent effective for the first two months following the second dose, according to a study from the companies’ scientists.

However, the efficacy drops in the following months, declining to 83.7 percent after four to six months.

CEO Albert Bourla said on CNBC that a drop in efficacy after such a short time is “not uncommon.”

Effectiveness in preventing severe disease remained at about 97 percent for up to six months, the end time of the published data, which comes from an ongoing study of 42,000 volunteers across six countries who each received two doses three weeks apart.

The new results, which are through March 13, follow other indications that the protection received from the Pfizer vaccine decreases over time.

The study is preprint, meaning it hasn’t been peer-reviewed. The authors of the study said that ongoing follow-up would be needed to examine how effective the vaccine is over a longer period of time before determining whether booster shots are needed.

But in a call with investors, Pfizer officials cited the study saying that it and other emerging real-world data suggest that immunity against both infection and symptomatic disease may wane for those who have gotten a two-dose regimen.

Initial data from a phase one study showed that participants had a higher level of neutralization antibody titers against the CCP (Chinese Communist Party) virus Delta variant after getting a booster—a third dose—versus those who just received two doses, officials said.

“The third dose elevates the neutralizing antibodies in our laboratory studies to up to 100 times higher levels [after the third dose] compared to [before],” Mikael Dolsten, Pfizer’s chief scientific officer, told investors on the call.

New York-based Pfizer plans to submit an application to U.S. regulators for emergency use authorization for a booster dose as early as August.

Two top U.S. health agencies said earlier this month that the evidence currently doesn’t show the need for boosters, but officials from one of the agencies signaled last week that boosters may be needed for certain populations.

If boosters are authorized, they would be recommended at least six months after the second dose, Pfizer indicated on July 28.

The Pfizer-BioNTech vaccine is the most used in the United States. More than 191.5 million have been administered, versus 138.2 million Moderna shots and 13.2 million from Johnson & Johnson.

Moderna’s vaccine is also delivered in two doses, while Johnson & Johnson is a single-dose shot.

Moderna hasn’t yet indicated to its recipients whether they’ll need a booster. The Massachusetts-based company announced in April that its vaccine was 90 percent effective in preventing COVID-19 and 95 percent effective against severe COVID-19 after six months.

However, that announcement came before the rise of the Delta strain, which now reportedly makes up 80 percent of sequenced cases in the United States.