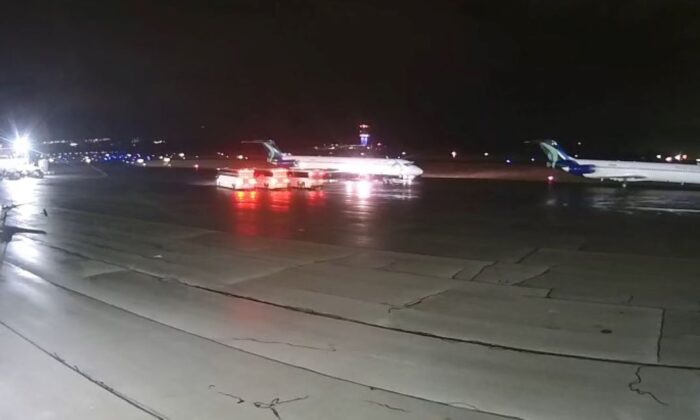 An airplane full of immigrant children and chaperones landed at the Wilkes Barre-Scranton International Airport in Pennsylvania on Christmas day. The children were then loaded onto buses and sent somewhere into Pennsylvania or neighboring New York or New Jersey. They were sent by the U.S. departments of Homeland Security and Health and Human Services.

It was not the first planeload of unaccompanied children sent by the federal government, and it wasn’t the last, but it was among the first to get widely noticed.

Local municipalities receiving large numbers of illegal immigrants are not being informed before they arrive. It’s the legal responsibility of HHS to safely care for unaccompanied children until they can be unified with a parent or a vetted sponsor, the department said in an email to The Epoch Times in December.

“As part of the unification process, our Office of Refugee Resettlement (ORR) facilitates travel for the children in its custody to their family or sponsors across the country,” an HHS spokesperson said.

Pennsylvania State Sen. Mario Scavello is introducing legislation that would implement a transportation program to move illegal immigrants, brought to Pennsylvania by an unauthorized relocation program, from Pennsylvania to Delaware.

The legislation would also ban the issuance of state contract work with any federal contractors working with the federal government to transport illegal immigrants into Pennsylvania.

“The federal government has relocated an unknown number of illegal immigrants to states across the nation, including Pennsylvania, and at the same time they have failed to provide information that ensures the safety of Pennsylvania citizens,” Scavello wrote in a memo promoting the bill. He says President Joe Biden’s open-border policy has created a health and financial crisis, and states across the nation are being forced to pay for “the reckless abandonment of the rule of law.”

Scavello said Governor Tom Wolf has jeopardized the safety and security of Pennsylvania residents by enabling this practice and by not acting on it, he is aligning himself with such policies.

The latest mass spread of COVID-19 is further exacerbated with the influx of illegal immigrants, who are not being tested and apparently not vaccinated, Scavello said.

“If the federal government is not willing to provide extra dollars to communities that have experienced increased strain on their healthcare systems, increased number of students in school districts and education costs and other services within our communities, then they shouldn’t be forced to take on more illegal immigrants and the additional financial responsibility,” the memo says.

Scavello is also promoting a resolution telling Congress to enforce its immigration laws because, he says, that’s not happing.

“What bothers me is, with the amount of homeless folks on our streets, with the number of homeless veterans, why don’t we take care of them first. If you want to be Santa Claus to the world, go ahead. But first, take care of the people in our country,” Scavello, a longtime advocate for the homeless told The Epoch Times. “Look at our cities. There are people living on the streets all over the place. Why aren’t we helping these folks? Why not find their families and find the tools they need?”

Many have asked how the federal government is going to pay for the many illegal immigrants who have been allowed across the border and spread across the country. The answer may be, it isn’t going to pay at all.

“When you put these kids into the schools, it becomes a local expense,” Scavello said. “Our districts average (spending) about $20,000 a child. But when you bring in these kids who don’t speak the language and may have other problems, you’re talking $35,000 per child. And that is borne by the local taxpayers–property owners–and nobody is talking about that. It’s on the back of the local taxpayer. People are struggling now and we keep putting more and more on their shoulders.

“How many illegal immigrants has the president relocated to his own home state of Delaware? If it is good enough for Pennsylvania, then why not redirect the relocation to Delaware?”