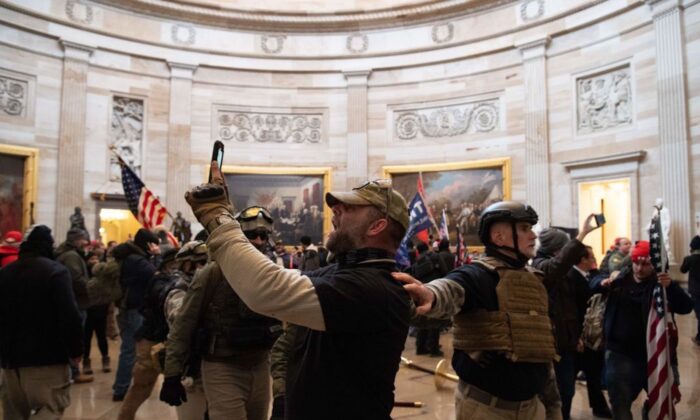 Protesters are seen taking pictures inside the U.S. Capitol in Washington, on Jan. 6, 2021. (Saul Loeb/AFP via Getty Images)
US News

Federal prosecutors obtained their first guilty plea in relation to the Capitol breach on Jan. 6.

Jon Schaffer, 53, of Indiana and a member of the Oath Keepers, pleaded guilty to “unlawfully entering the U.S. Capitol to obstruct Congress’ certification of the U.S. presidential election results,” according to the Department of Justice (DOJ.)

The Oath Keepers define themselves as a “Non-partisan association of current and formerly serving military, police, and first responders, who pledge to fulfill the oath all military and police take to ‘defend the Constitution against all enemies, foreign and domestic.'”

The DOJ said that Schaffer was donning a tactical vest and had bear repellent during the breach.

“Oath Keepers member Jon Schaffer has pleaded guilty to multiple felonies, including for breaching the Capitol while wearing a tactical vest and armed with bear spray, with the intent to interfere with Congress’ certification of the Electoral College results,” said Acting Deputy Attorney General John Carlin.

“The FBI has made an average of more than four arrests a day, seven days a week since January 6th.  I commend the hundreds of special agents, prosecutors and support staff that have worked tirelessly for the last hundred days to bring those who committed criminal acts to justice,” Carlin added.

Schaffer acknowledged that he was a lifetime founding member of the Oath Keepers, some of whom, according to the DOJ release, are associated with militia groups.

He further recognized that he went to Washington on Jan. 6, to participate in the “Stop the Steal” rally in order to demonstrate his belief that the election results were fraudulent, that he forced his way into the Capitol building, which then forced Capitol Police to retreat.

“The defendant in this case admits forcing his way into the U.S. Capitol on January 6 for the express purpose of stopping or delaying congressional proceedings essential to our democratic process. These actions are disgraceful and unacceptable” FBI Deputy Director Paul Abbate said.

If convicted, Schaffer faces up to 30 years in prison.

The Epoch Times reached out to Schaffer’s lawyers for comment.

Meanwhile, the U.S. Capitol Police officer who shot dead an Air Force veteran during the tumultuous events on Jan. 6 will not be charged, the DOJ announced April 14.

The U.S. Attorney’s Office for the District of Columbia and the DOJ’s Civil Rights Division decided jointly not to pursue charges against the officer.

The decision came after a “thorough investigation” into the shooting of Ashli Babbitt, a 35-year-old who joined others in breaching the U.S. Capitol in Washington during a joint session of Congress in January. Babbitt was shot while trying to climb through a broken window into the Speaker’s Lobby, adjacent to the House chamber.

“Officials examined video footage posted on social media, statements from the officer involved and other officers and witnesses to the events, physical evidence from the scene of the shooting, and the results of an autopsy,” the DOJ said in a statement.

“Based on that investigation, officials determined that there is insufficient evidence to support a criminal prosecution.”